In Extremis by Lindsey Hilsum

“Our mission is to report these horrors of war with accuracy and without prejudice. We always have to ask ourselves whether the level of risk is worth the story. What is bravery, and what is bravado?”
— Marie Colvin, 2010

Marie Colvin was glamorous, hard-drinking, braver than the boys, with a troubled and rackety personal life. She reported from the most dangerous places in the world and her anecdotes about encounters with figures like Colonel Gaddafi and Yasser Arafat were incomparable. She was much admired, and as famous for her wild parties as for the extraordinary lengths to which she went to tell the story.

Fellow foreign correspondent Lindsey Hilsum draws on unpublished diaries and interviews with friends, family, and colleagues to produce a story of one of the most daring and inspirational women of our time. 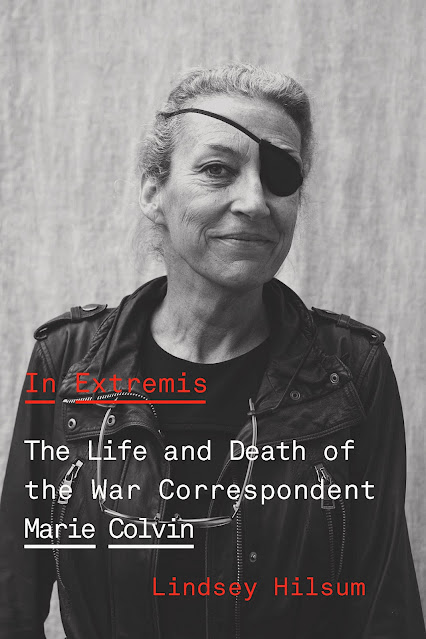 I didn’t know much about journalist Marie Colvin before picking up this book, which I was driven to purchase after reading Clarissa Ward’s On All Fronts. I knew of Colvin only by photographs showing her signature eye patch — a display of her bravery in the field.

While speaking at a memorial service at St Bride’s Church in 2010 for those who lost their lives while reporting, Marie stated:

“Many of you here must have asked yourselves, or be asking yourselves now, is it worth the cost in lives, heartbreak, loss? Can we really make a difference? I faced that question when I was injured. In fact one paper ran a headline saying, has Marie Colvin gone too far this time? My answer then, and now, was that it is worth it.”

Known for her humanity, passion, and tireless reporting, Marie amplified the voices of those who otherwise wouldn't be heard.

In Extremis charts the life of Colvin from her childhood in Oyster Bay, through her education at Yale University, and to her position as a foreign affairs correspondent for The Sunday Times. During Marie’s monumental career, she covered conflicts in Chechnya, Serbia, Sri Lanka, East Timor, and many other active war zones.

While leading an extremely accomplished professional life, Colvin struggled with alcoholism, depression, and PTSD. At times, she wasn’t able to get out of bed, and found the only way to cope was to throw herself into work by traveling to the world’s most dangerous places, often against the advice of her editors and those closest to her.

Hilsum’s biography is expertly crafted, based on more than three hundred of Marie’s private journal entries and interviews with those closest to her, and the result is a tremendously moving biography of one of the world’s most inspiring journalists.

Marie Colvin unfortunately died while stationed in the city of Homs, Syria in 2012, and made her last broadcast via satellite phone. Speaking with Anderson Cooper, Colvin described the situation as the worst conflict she had ever seen.

In 2019, an American court ruled that the Syrian government was liable for Colvin’s death and ordered that they pay $302 million in damages to Marie’s family.

For those interested in the life and work of Marie Colvin, I highly recommend Lindsey's book, and there’s also a movie called A Private War starring Rosamund Pike.

Lindsey Hilsum is Channel 4 News International Editor. She has covered many of the conflicts of recent years, including Syria, Ukraine, and the Arab Spring – sometimes alongside Marie Colvin. She has won awards from the Royal Television Society and BAFTA amongst others, and was the recipient of the 2017 Patron’s Medal from the Royal Geographical Society. In Extremis was shortlisted for the Costa Biography Award and won the James Tait Black Award.

In Extremis by Lindsey Hilsum is available for purchase in paperback format from Indigo or e-book and audiobook format from Kobo. Check Penguin Random House Canada for additional retailers.