Skip to main content
Labels
Posted by Sean Loughran May 31, 2022

On All Fronts by Clarissa Ward

“It’s easy, as a journalist, to spend time in a dangerous place and become desensitized to the risks, to want more, to never think that what you have is enough.”

The recipient of multiple Peabody and Murrow awards, Clarissa Ward is a world-renowned conflict reporter. In this strange age of crisis where there really is no front line, she has moved from one hot zone to the next. With multiple assignments in Syria, Egypt, and Afghanistan, Ward, who speaks seven languages, has been based in Baghdad, Beirut, Beijing, and Moscow. She has seen and documented the violent remaking of the world at close range. With her deep empathy, Ward finds a way to tell the hardest stories. On All Fronts is the riveting account of Ward’s singular career and of journalism in this age of extremism. 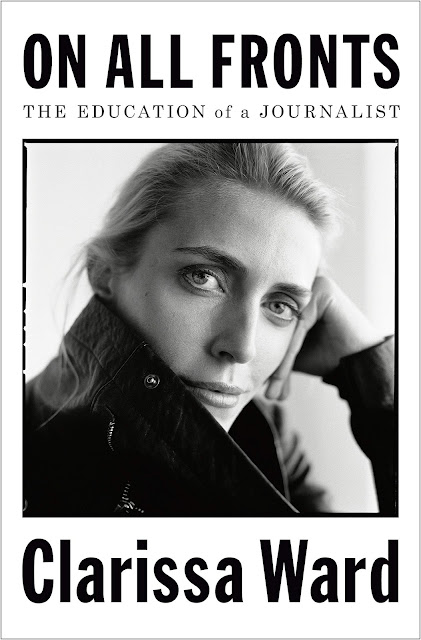 What I thought
I haven't been as moved by a memoir since reading Between Two Kingdoms by Suleika Jaouad a couple of years ago.
It was when Clarissa was a student at Yale that she got news about the Twin Towers and that sparked the journalistic fire within her.
“It sounds presumptuous,” she writes, “but I knew I had to go to the front lines, to hear the stories of people who lived there and tell them to the people back home.”
Clarissa's passion as a young journalist while working the night shift at Fox News is infectious. I felt her ambition seeping through the pages.
She weaves in tales of her teenage years when she was once a stand in for Uma Thurman on the set of Kill Bill. I appreciated that Ward chose journalism over Hollywood, despite having stardom at her fingertips with a direct invitation from Tarantino.
Ward talks in great detail of her job, never once holding back. She relays the realities of life on the front lines in an extraordinarily well written account. I was mesmerized by the book, and found Clarissa to be incredibly inspiring. Her hunger fuelled my own passion to report.
“I didn’t understand that the privilege of witnessing history came at a price. But in that moment, only one thing mattered to me: I had a calling.”
On All Fronts is fast-paced, thrilling, deeply intimate, and tremendously moving. There's so much I could say about the book, but I feel readers should discover the work of this magnificent woman themselves.
It's without a doubt one of the best books I've ever read.

Clarissa Ward is CNN's chief international correspondent. In her fifteen-year career spanning Fox, CBS, and ABC, Ward has reported from front lines across the world. She has won seven Emmy Awards, two George Foster Peabody Awards, and many other awards and recognitions. She graduated with distinction from Yale University, and in 2013 received an honorary doctor of letters degree from Middlebury College in Vermont. She lives in London with her family.

On All Fronts is available to purchase in hardcover or paperback edition from Indigo or in e-book and audiobook format from Kobo. Check Penguin Random House Canada for additional retailers.