In conversation with Emily Austin

Emily R. Austin was born in Ontario, Canada, and received a writing grant from the Canadian Council for the Arts in 2020. She studied English literature and library science at Western University. Austin currently lives in Ottawa.
Emily's tremendous debut novel, Everyone in This Room Will Someday Be Dead hit the shelves in July of last year, and has received rave reviews from Buzzfeed, Quill & Quire, Chatelaine, and Globe and Mail. The book's illuminating cover was designed by Kelli McAdams, who I had the pleasure of chatting with late last year.
I'm thrilled to chat with Emily today about how her life has changed since the release of the book, how her memorable and hilarious protagonist Gilda would be handling life under lockdown, the challenges of life as a writer, and what advice she would offer to aspiring authors.

Emily, I’m thrilled to chat with you today! It’s been eight months since the release of your book, how has your life changed since then?
Thank you so much for chatting with me, Sean! In terms of how my life has changed, I get a few more DM’s than I used to, and I’m occasionally embarrassed at my day job when someone says, “Hey wait a minute Emily, did you write a book?” Beyond that, my life doesn’t look too different. I guess it’s effected how I write now. In the past, I comforted myself when I thought something I’d written was bad by thinking, “Ah well, no one will ever read this anyways.” Now I think, “Oh God, someone might actually read this.”
Your protagonist, Gilda is one of the most hilarious and memorable characters I’ve ever read in a book. How would she be handling the pandemic?
Thanks so much for saying that about Gilda. Poor Gilda has pretty debilitating anxiety and is fixated on death. So, it’s fair to say the pandemic would have been a nightmare. I think she would be doing everything she could to ensure she wasn’t responsible for anyone’s death. If I were to write her set during the pandemic, I think her story might begin with her in absolute isolation, doing everything possible to ensure she poses zero risk to anyone, forgoing her usual trips to the ER, panicking alone in her apartment, and perhaps not even going to grocery stores or pharmacies.
That said, Gilda is a good example of why anti-mandate arguments that cite mental health being worse due to lockdowns do a disservice to some folks with mental illness. Of course, I definitely believe humanity’s mental health has been negatively affected by the pandemic; however, Gilda’s mental health would be much worse if even more people were sick and dying, and if she saw people behaving recklessly with other people’s lives.
When it comes down to the wire though, I see Gilda as someone who is going to try. Because of that, I think (depending on what Gilda decides, because I do kookily think sometimes characters make their own decisions), her pandemic story might end with her evolving into someone who takes up some sort of helper role. Maybe rather than working in a Catholic church, she might find herself manning the vaccine check-in at an arena, or something. That would take her quite a while to get to, though. Most of her pandemic book would definitely be her in a state of absolute dread and isolation.
What’s the most challenging part of being a writer?
To be honest, writing is one of the least challenging areas of my life. I have plenty of grievances relating to the other areas, though—don’t worry. I guess one thing I could complain about is that I’m naturally pretty anti-social. I find speaking difficult. I’ve tried to work on that, though. Even before my book, I’d made an effort there. Nonetheless, any form of public speaking is just not aligned to my nature. I think I could go a very long time being completely mute, speaking to no one, actually. So, the most difficult part of being a writer for me is probably anything to do with speaking.
Like Gilda though, when it comes down to the wire, ultimately, I am also someone who is going to try. So, I’m eager to say yes to every opportunity I can, and once the speaking is over—I’m usually happy I did it.
What advice would you give to aspiring authors?
Just keep at it. I think writing a book is less about having a good idea, or even a talent, or whatever it is, than it is about devoting a terrible amount of effort, thought, and time to a document. Not to say those other things don’t matter, it’s just that in many ways I think the most difficult part of writing a book is the dedication and endurance required. So, just keep at it.
I follow you on Instagram, where you post pictures of your writing, your adorable cat Lou, and your current reads. What’s your all-time favourite book?
Thanks for following me and Lou, Sean. You have such a great bookstagram. I’m sort of chronically on Instagram. Someone messaged me once saying, “Hey, I thought your Instagram was just a picture of a garbage can!” because that’s what Gilda’s Instagram is. I had to break it to them that I am not Gilda.
I’m trying to recover from that awful condition where I sort of morph myself to suit the people around me. I’m doing a pretty good job of getting over that, but it’s hard for me to say what my favourite book is because I have a few different answers depending on who is asking.
I’d usually tell girls in their teens or twenties, “The Bell Jar”, or something newer like Candice Carty-Williams’ “Queenie”, an Ottessa Moshfegh book, or Jean Kyoung Frazier’s “Pizza Girl.”
I’d tell women a little older, “The Stone Angel” by Margaret Laurence, or “Flowers for Algernon.”
To kids, I’d say, “Frog and Toad Are Friends.”
Closer friends might have heard, “A Confederacy of Dunces”, “The Colour Purple”, or “Person” by Sam Pink.
I guess the truth is somewhere in the middle of all of those. If anyone knows whatever that is, let me know. 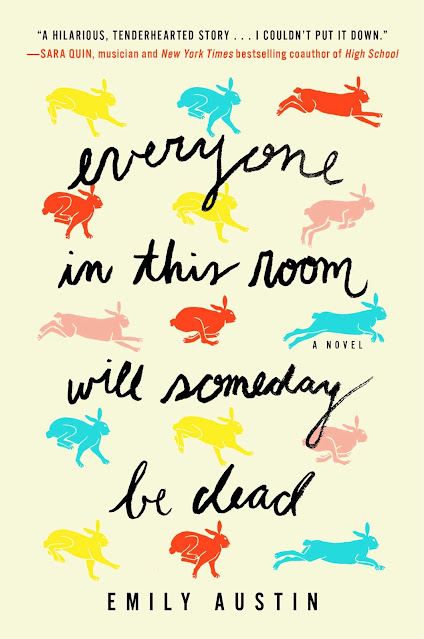 Everyone in This Room Will Someday Be Dead is available for purchase in hardcover or paperback format at Indigo or in e-book format on Kobo. Check Simon & Schuster Canada for additional retailers.

Labels: in conversation with simonschuster
Location: Vancouver, BC, Canada