Everyone in This Room Will Someday Be Dead by Emily Austin

“I had no idea my pants were weird. I was used to criticism regarding my lesbianism, but the pants comment struck me like a golf ball to the head in a boat.”

EVERYONE IN THIS ROOM WILL SOMEDAY BE DEAD

Gilda, a twenty-something, atheist, animal-loving lesbian, cannot stop ruminating about death. Desperate for relief from her panicky mind and alienated from her repressive family, she responds to a flyer for free therapy at a local Catholic Church, and finds herself being greeted by Father Jeff, who assumes she’s there for a job interview. Too embarrassed to correct him, Gilda is abruptly hired to replace the recently deceased receptionist Grace.

In between trying to memorize the lines to Catholic mass, hiding the fact that she has a new girlfriend, and erecting a dirty dish tower in her crumbling apartment, Gilda strikes up an email correspondence with Grace’s old friend. She can’t bear to ignore the kindly old woman, who has been trying to reach her friend through the church inbox, but she also can’t bring herself to break the bad news. Desperate, she begins impersonating Grace via email. But when the police discover suspicious circumstances surrounding Grace’s death, Gilda may have to finally reveal the truth of her mortifying existence. 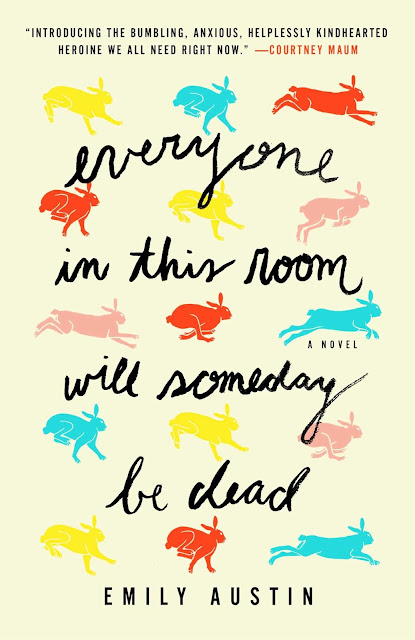 Seriously, I read it in one sitting. The entire thing, I just gobbled it up. I laughed, I cried, I felt like I was right there with Gilda.

Gilda and I are about the same age, and I related to her character a lot in the book. Her certain quirks were similar to some of my own. I found her instantly likeable, a true gem, and charming in every way.

Gilda is a frequent flyer at the emergency room, and a hypochondriac, which I gather she knows, seeing as she knows every member of staff at the hospital, right down to the janitor. Seeing a poster advertising a woman smiling while she’s waiting at the triage desk, she thinks, “does living a life unburdened by the fear of catching HPV result in that level of euphoria? If so, shoot me up.” She has her HPV vaccine on that particular visit.

She doesn’t like attention and cries when she’s overstimulated, opening herself up to the reader and revealing her sensitivities. Gilda’s struggle with depression is going to be relatable for anyone who struggles with the darkness, and her deadpan humour alone makes this one a must-read, regardless of your mental health status.

It was an easy read, one filled with dark humour and plenty of giggles. Emily managed to capture the essence of what I imagine she dreamt up for Gilda so accurately through her prose and had me falling for her main protagonist within moments.

This is a beautiful novel. While I can’t guarantee you’ll relate as well to Gilda as I did, I can assure that you’ll be laughing like mad when you read this one.

“All the comments beneath the article ask what possessed this man to conduct such a harebrained experiment, but I once microwaved a lightbulb when I was a teenager, out of blind curiosity. I understand how the train of human thought can derail.”

Without a doubt, it’s one of the funniest novels I’ve read this year. It’s one of those books that you get to the end of and immediately google 'books like everyone in this room will someday be dead'… Then you feel disappointed because none of the search results quite live up to the same standard.

I feel like there’s a little, or a lot, of Gilda, lurking within all of us, and this book will serve each of us in our own ways. For me, it was the right book at the right time, and I adored it.

Thanks to Atria Books, I received an ARC a couple of months before the release, but now that this book is on shelves, I’ve already picked one up for myself, and a couple for friends, too.

Emily Austin is a Canadian writer. Everyone In This Room Will Someday Be Dead, published by Atria Books in Canada, is her debut novel. Her novella, Oh Honey, was published in 2017 by Holland House Books. With the support of the Canadian Council for the Arts, Emily is currently writing a collection of feminist, LGBTQIA+ poetry.

Everyone in This Room Will Someday Be Dead is available for purchase at Indigo and on Kobo. Check GoodReads for additional retailers.