The Year of Magical Thinking by Joan Didion

“Grief turns out to be a place none of us know until we reach it. We anticipate (we know) that someone close to us could die, but we do not look beyond the few days or weeks that immediately follow such an imagined death. We misconstrue the nature of even those few days or weeks. We might expect if the death is sudden to feel shock. We do not expect this shock to be obliterative, dislocating to both body and mind.”

THE YEAR OF MAGICAL THINKING

Several days before Christmas 2003, John Gregory Dunne and Joan Didion saw their only daughter, Quintana, fall ill with what seemed at first flu, then pneumonia, then complete septic shock. She was put into an induced coma and placed on life support.
Days later—the night before New Year’s Eve—the Dunnes were just sitting down to dinner after visiting the hospital when John Gregory Dunne suffered a massive and fatal coronary. In a second, this close, symbiotic partnership of forty years was over. Four weeks later, their daughter pulled through. Two months after that, arriving at LAX, she collapsed and underwent six hours of brain surgery at UCLA Medical Center to relieve a massive hematoma.
This memoir is Didion’s attempt to make sense of the “weeks and then months that cut loose any fixed idea I ever had about death, about illness … about marriage and children and memory … about the shallowness of sanity, about life itself.” Review
In The Year of Magical Thinking, writer Joan Didion, who spent her career covering everything from the 60s hippie movement of Haight-Ashbury to the civil war in El Salvador, turns her thoughts to the subject of grief.
The result is an emotionally impactful memoir that reads as stream of consciousness.
In a book that will appeal to anyone who is grieving, Didion captures the immense despair felt when a loved one passes, and the emptiness that exists in the aftermath.
“We were together twenty-four hours a day, a fact that remained a source of both merriment and foreboding to my mother and aunts. “For richer for poorer but never for lunch,” one or another of them frequently said in the early years of our marriage,” Didion writes, continuing, “I could not count the times during the average day when something would come up that I needed to tell him. This impulse did not end with his death. What ended was the possibility of response.”
There are many questions Didion poses, those to herself and to her husband John. She wonders if she could have changed something, and if the outcome would have been different. Did John know time was running out?
I found this book to be a beautiful reflection of Didion's life with her husband and daughter Quintana. She shares memories of their growing older, travels, and professional accomplishments.
There were moments throughout that I also felt Didion's rage, her sadness, and her regret.
I was drawn to read this after watching a Netflix documentary about Joan Didion called The Center Will Not Hold. If you're in the Los Angeles area, a trip to the Hammer Museum for Hilton Als’ exquisitely curated retrospective on Didion is a must. 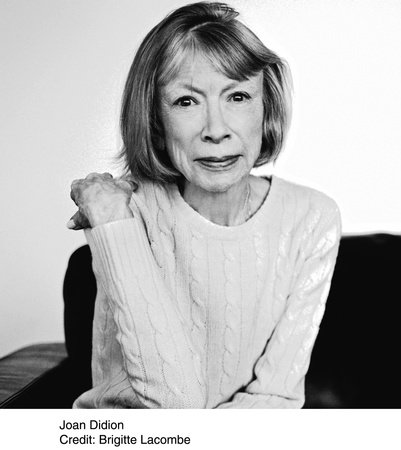 Joan Didion was born in Sacramento in 1934 and graduated from the University of California, Berkeley, in 1956. After graduation, Didion moved to New York and began working for Vogue, which led to her career as a journalist and writer. Didion published her first novel, Run River, in 1963. Didion’s other novels include A Book of Common Prayer (1977), Democracy (1984), and The Last Thing He Wanted (1996).
Didion’s first volume of essays, Slouching Towards Bethlehem, was published in 1968, and her second, The White Album, was published in 1979. Her nonfiction works include Salvador (1983), Miami (1987), After Henry (1992), Political Fictions (2001), Where I Was From (2003), We Tell Ourselves Stories in Order to Live (2006), Blue Nights (2011), South and West (2017) and Let Me Tell You What I Mean (2021). Her memoir The Year of Magical Thinking won the National Book Award for Nonfiction in 2005.
In 2005, Didion was awarded the American Academy of Arts & Letters Gold Medal in Criticism and Belles Letters. In 2007, she was awarded the National Book Foundation’s Medal for Distinguished Contribution to American Letters. A portion of National Book Foundation citation read: “An incisive observer of American politics and culture for more than forty-five years, Didion’s distinctive blend of spare, elegant prose and fierce intelligence has earned her books a place in the canon of American literature as well as the admiration of generations of writers and journalists.” In 2013, she was awarded a National Medal of Arts and Humanities by President Barack Obama, and the PEN Center USA’s Lifetime Achievement Award.
Didion said of her writing: “I write entirely to find out what I’m thinking, what I’m looking at, what I see and what it means.” She died in December 2021.

The Year of Magical Thinking by Joan Didion is available in hardcover, paperback, e-book, and audiobook format. Check IndieBound for a retailer near you.