Nona Willis Aronowitz is our guest on AD's In Conversation With today. She's an award-winning editor, writer, and author based in New York. In addition to her biweekly sex and love advice column for Teen Vogue, Nona’s work has been published by a number of other outlets including The New York Times, The Cut, ELLE, VICE, and Playboy.

Her latest offering, Bad Sex, was named a most anticipated book by Bustle, Esquire, and The Millions, and is described as a blend of memoir, social history, and cultural criticism that probe the meaning of desire and sexual freedom today.

Nona joins us to talk about what led her to write Bad Sex, while sharing her thoughts on sexual liberation, and her role as an advice columnist.

We're here to talk about sex, a topic a lot of us would rather shy away from. What led you to write this book?

The "sex" part of the title is meant to be viewed broadly—sure, we're talking about the act of sex, but it's also a stand-in for pleasure, desire, and romantic happiness. I've always been interested in writing about gender and sexuality, but my background is in journalism, so even when I wrote about my personal life, I always couched it in a larger societal and historical context.

And then, my whole life was turned upside down—I got divorced and my father got sick at the exact time the country was going through MeToo and the tumultuous 2016 election. It felt like my personal story dovetailed uncannily with what the rest of the country was reckoning with. I started to do lots of archival research and history-reading at the exact same time I was going through these big life changes. And I revisited my mother, the pro-sex feminist Ellen Willis's work, too, which hit different now that I was closer to the age at which she was writing. My story felt very cinematic, but also rich with historical parallels, so I felt compelled to write it all in book form, with a true arc to the narrative.

How would you summarize Bad Sex in five words?

What do I truly want?

I recently consulted for a sexual wellness company, and found that the online sex toy industry is growing at a rapid pace, with the pandemic contributing to sales. Through research, I found that many consumers hold a lot of shame and embarrassment when it comes to visiting brick and mortar locations.

Many folks seek out pleasure online without having to visit what are deemed "sleazy" stores. What are your thoughts?

I've actually done work for a sex toy company too, and it's been fascinating to witness the industry's makeover from a few decades ago. Sex toy brands have become much more "female-friendly," explicitly fighting the "sleazy" characterization and employing a sleek, palatable, kind of desexualized look. And many of them address the shame issue too, on their Instagram and whatnot.

I've seen lots of messaging like, "pleasure is wellness," "sex is healthy," which I see as attempts to break down the dirty, illicit connotations of sex. (They're also ways to sidestep the strict and frankly sexist content policies social media companies have.) I think it's great that e-commerce can help people break down their shame around sex, but I also think sex toy companies should be able to be more sexually explicit when they advertise!

You've answered a lot of questions I've been afraid to ask through your Down to Find Out column on Teen Vogue. Most recently, Am I Gay Enough? What to Know About Queer Identity.

What's the most challenging part of your role as an advice columnist?

Since I'm just a writer and not a trained sex ed teacher, sometimes I struggle with what's age-appropriate. I don't want to talk down to teens, but I also don't want to open up a whole can of worms that they weren't necessarily asking for. I think in most cases, teens can understand most of what adults can, but their impulse control is not fully developed, so you have to be very measured in how you talk to them about sex, especially when it comes to physical and emotional safety.

What does the term "sexual liberation" mean to you?

I think it means—and this is very difficult, if not impossible, to achieve—being able to explore your authentic desires without societal expectations getting in the way. That means pushing past your own internalized doubts, but it also necessitates changing culture itself, because nobody can care that little about societal norms.

It also means having bodily autonomy and control over one's reproductive life. This should go without saying, but no country or state that outlaws abortion or contraception can ever hope to be fully sexually liberated.

Tell me about the last great book you read.

I'm in the middle of Emma Straub's This Time Tomorrow, and it's an absolute delight. It's a time-travel story about a 40-year-old being mysteriously dropped back into her teenhood in '90s New York City. I'm a native New Yorker who's about the same age and from a similar milieu as the main character, so the highly relatable elements are really fun. But beyond that, it's so delicious to think about inhabiting a teen body and mind again, when there was so much social stimulation and things changed so fast and everything seemed like life or death. Sometimes I miss that feeling. 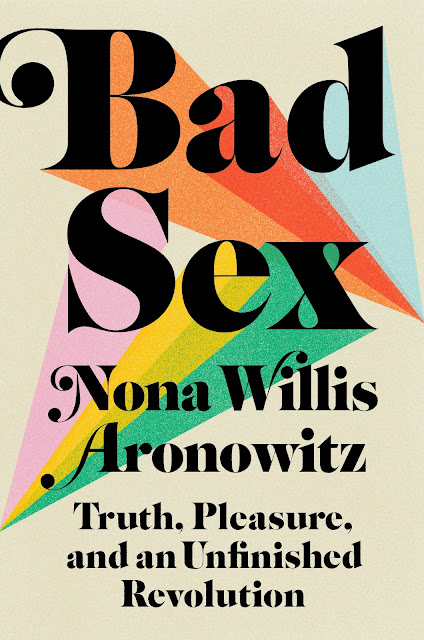 Bad Sex by Nona Willis Aronowitz is available for purchase in hardcover format from Indigo or e-book and audiobook format from Kobo.

Nona has some upcoming book events at Books Are Magic, The Golden Notebook, and Skylight Books. Visit her website for more news and events.