In conversation with Laura Whitfield

I'm honoured to have Laura Whitfield joining me on AD this morning. I received a copy of Laura’s memoir, Untethered, earlier this year, and felt an instant connection to her. Getting to know Laura over these past few months has been truly wonderful.

Laura grew up in Raleigh, the capital of North Carolina. She's daughter of a journalist and teacher, and has worked in an array of fields throughout the duration of her career — from copywriting to columnist, and travel writing to personal assisting.

Reading her memoir, you’ll soon come to realize that Laura has lived a remarkable life. Her story is about one woman’s quest to find hope and stability after the tragic death of her brother. It’s a tale of overcoming shame, embracing faith, and learning that taking risks, and failing, can lead to a bigger life than you could have ever imagined.

Laura has inspired me to dream big, and to never let go of hope. We connected last month to talk about the challenges of penning her memoir, the submission process, her experience with Wilhelmina Models, and some of her favourite authors.

What was the most challenging part of writing Untethered?

Unearthing and healing from shame. As I began to write, I stumbled on memories that I’d either buried or completely forgotten. In order to finish my book, I was forced to face these dark truths. I’d sit at my computer and tell myself that I couldn’t possibly share these things with the world. Then I realized that if I worried about what others might think, I’d never write a word. Or I’d write, but gloss over the ugliness to make it more palatable. I knew doing that would kill the connection with my readers. It wouldn’t honor my life as I’d lived it. So I wrote as if I were the only one who’d ever read it. As I did that, I gained the courage to keep going.

When did you decide you were going to write a memoir and how did you find the submission process?

I wish I could remember the moment I decided to write Untethered. I’m guessing it was around the time I retired from teaching back in 2015. One of my daughters said, “Mum, you’ve had an interesting life. You should write about it.”

I thought about that and realized she was right. I started working with my writing coach, Brooke Warner, in January 2017 and finished a polished first draft in March 2019. Brooke was the co-founder of She Writes Press, an indie press for women authors. She was interested in publishing my story, but I told her when we began working together that I wanted to find an agent and go the traditional route. Once I finished my book and queried agents for about six months, I realized that She Writes Press would actually be the best home for my book.

She Writes is an award-winning press with a built-in community of women authors and readers who support each other. I knew I’d never get that kind of support with one of the Big Four. Signing with She Writes was one of the smartest decisions I’ve ever made.

I worked in the fashion industry for a long time, and actually got my start dressing the models backstage at fashion week. I understand firsthand how cutthroat the industry can be.

What was your experience like working with Wilhelmina Models?

I actually modeled for Wilhelmina twice: The first time was in New York in 1977, and the second time was for Wilhelmina Miami in 2003. The first time was grueling. Honestly, I had no idea what I was getting myself into because I went to New York on a whim. The summer I lived on the Outer Banks, I fell in love with a boy who left North Carolina and moved to New York to model. I modeled a little in North Carolina and then followed him up the next year. I was twenty, green, and unprepared, and suddenly I was propelled into that tumultuous world.

Wilhelmina Cooper was lovely and kind. But I was growing out my short hair and hardly had enough money for a manicure, much less fashionable clothes, so I constantly felt insecure. That was never more true than when I went to go-sees or auditions, which were terrifying. I was surrounded by gorgeous girls who were polished and professional and seemed to have it all together. I constantly compared myself to them and always came up short, at least that’s how I felt.

I was forty-five when I returned to modeling and forty-seven when I signed with Wilhelmina Miami. I felt confident and self-assured and it was fun. I was doing lifestyle shoots by that time, so it wasn’t competitive like fashion. I worked for clients like Avon and DSW and Regent Seven Seas and made some great friends. I was also teaching kindergarten at the time. I’d leave school, hop on a plane, fly to Miami, and check into a posh South Beach hotel. Early the next morning I’d walk or taxi to the location, hang out in a motor home all day with the models and stylists, shoot, and then fly home. The second time was the charm.

You’ve had a wonderful career, working in many positions. Tell me more about the work you’ve done for nonprofits.

I’ve always enjoyed helping others, so moving into the nonprofit sector was a natural fit. I was a staff writer for two years for an international relief agency, where I wrote stories relayed from the field, including the war in Bosnia and the Rwanda genocide.

Next I worked for The Orange Duffel Bag Initiative in Atlanta, which helps teens aging out of foster care. I met one of the founders, Echo Garrett, on Twitter of all places. We chatted, and she told me she needed a public relations director. I’d been an advertising copywriter, so I volunteered and did that for a little over a year.

My next job was communications director for the national branch of the Anglican Church I attended. I helped develop their website and newsletter and other communications. I did that for three years. Each of those jobs helped equip me for the communications and publicity I do now as an author.

We’ve had an unsteady couple of years with the uncertainties of the pandemic. What’s gotten you through it?

The main thing is my faith. The pandemic was terrifying at times, especially in the beginning. No one knew what we were dealing with and then people began getting sick and dying by the thousands. I clung to my belief that I wasn’t alone in my fear, and that God was there and would see me through.

Then there was my family. I have an amazing husband and we were together 24/7 for over a year. We live in a beautiful wooded neighborhood by a lake, so even when were sheltering, we were surrounded by beauty and that certainly helped.

We also have five amazing kids, all grown, and we had our first grandchild right in the middle of the pandemic. He was such a gift. His coming was a reminder that life goes on, that there can be joy in the midst of great sorrow.

I was unable to write, so I read lots of books. They were always there when I needed an escape. I also signed my book contract in October 2020, so that gave me something to look forward to.

I know you’re passionate about books. Who are your favourite authors?

Madeleine L’Engle became a mentor in my early thirties (both through her books and through a writing workshop I attended) so I give her a lot of credit for my becoming an author. Theologians Frederick Buechner and Richard Rohr have been good companions on my faith journey. Memoirists Dani Shapiro and Anne Lamott inspired my love of memoir. I love the Poldark series by Winston Graham—so good. Kate Bowler is an amazing writer and a new friend. I’ve encountered some incredible writers through The International Pulpwood Queens and Timber Guys Book Club (too many to mention—you can check them out here).

I’m sure some of my yet-to-be-discovered favourites are waiting in my TBR stack, which is very eclectic. 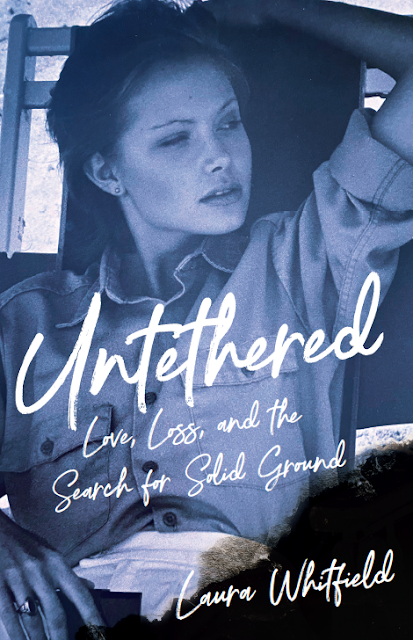 Untethered is available for purchase in paperback edition from Indigo or in e-book format from Kobo. My US readers can check SheWritesPress for additional retailers while my Canadian readers are invited to check GoodReads.

Labels: in conversation with She Writes Press
Location: Vancouver, BC, Canada