In conversation with Tara Moss

Tara Moss is joining me on AD's In Conversation With this morning to discuss her new novel, The Ghosts of Paris, out today with HarperCollins. Moss, who currently lives in Victoria, is the author of thirteen bestselling books that have been published in nineteen countries.

The acclaimed writer is also an experienced documentary host with a passion for research and sharing human stories. She has hosted, produced, and written a number of documentaries.

What drew me to Tara was not only her exceptional writing, but also her advocacy work. Moss has been a UNICEF Australia Goodwill Ambassador for almost twenty years, and has carried out a significant amount of work for the organization. She has received a number of awards and honours, including both the Order of Lambrick Park, and the Honorary Citizen Award, the highest formal honour awarded by the City of Victoria.

Tara and I caught up ahead of the release to talk about the writing process, the challenges she has faced in her advocacy work, and what she loves most about living in beautiful B.C.

Your new book, The Ghosts of Paris, follows a former female war reporter named Billie Walker. The search for a wealthy client's husband brings memories of Billie's own missing husband to the surface.

When did the idea for the book come to you?

The characters always come first for me, but their circumstances and the era in which their stories unfold seem to come with them. The events in The War Widow lead naturally to those in The Ghosts of Paris, and in some ways, for our heroine they are like two parts of a single story. We see Billie’s agency increase in popularity and success, and an opportunity arrives with a wealthy client that naturally leads Billie to Europe and the unsolved mystery of her own missing husband — something that has been hanging over her for years.

Like so many women of the time, she had to make do and soldier on when her searches go her nowhere, but this opportunity means she can actually return to Europe and investigate on the ground. Of course anywhere she goes, trouble follows…

As a historical fiction novel, I imagine a lot of research was required. What was the writing process like?

I am something of a research nerd, and earned the informal title of ‘forensic tourist’ for my dedication, having been choked unconscious and set on fire for the research for previous books. For this series I get my hands dirty, as always, but I also need to dig deep into historical records, and speak to the fading few who were actually there in the 1940s. That is such a privilege. I also walk the ground, literally, setting scenes in vintage buildings and areas that still exist today, even if dilapidated or closed to the public.

I become obsessed not only with the political and social documents of the time, but also the tiles on the floors, the curve of the ceilings, the threads of the clothing. I wear 1940s clothes and add objects from the period to my vintage collection. And no matter how much I research, there is always more to learn and to know.

I've long admired your advocacy work. What challenges have you encountered when speaking out, and how have you overcome them?

Thank you. I wrote my little non fiction book Speaking Out to address some of the challenges encountered by speaking out, like dealing with criticism — which is healthy and to be expected — and trolls — who are less healthy in their criticism.

It’s important to root your advocacy in a good foundation of research and facts, so you can speak with confidence and hold your ground when needed. The world needs fresh voices, especially those from underrepresented groups. This is a time for advocacy and change.

Who has inspired you most in your life?

My biggest inspirations are my mother, Janni, and her parents, my Oma and Opa who survived WW2. I dedicated The War Widow, my first Billie Walker novel to them. They immigrated to Canada with just their suitcases and small children, having survived the occupation of Holland, and my opa being taken by the Nazis and forced into slave labour.

It’s hard for many of us today to imagine just what ordinary people of the time went through, and that is one of the reasons I write about the 1940s in my fiction. In terms of my non fiction advocacy, I am immensely grateful to and inspired by the disability community, of which I am a part, and artist Frida Kahlo, who is an incredible disabled icon, though many choose to overlook this aspect of her personal journey and the expressions of her physical pain and disability in her art.

We're lucky to call beautiful British Columbia our home. What do you love most about living here?

We are fortunate to live in one of the most beautiful places in the world, and among people who are generous and down to earth. I have lived in many cities around the world, from Milan and New York to Zurich and Sydney, but being here in my birthplace nearby blood family is so important to me. 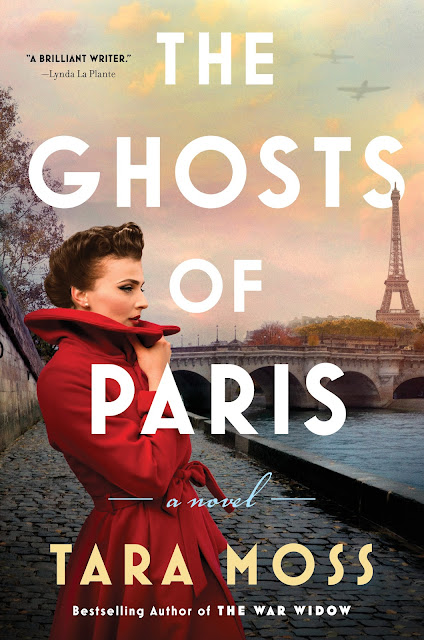 The Ghosts of Paris is available for purchase in hardcover format from Indigo and in e-book or audiobook format from Kobo. Check HarperCollins Canada for additional retailers.

To learn more about Tara, her other books, and her advocacy work — visit her website.