In conversation with Sarah Jackson

Sarah Jackson is a graduate of the University of Toronto, where she studied English Literature. She currently works in publishing at Penguin Random House Canada.

Her brilliant debut novel, A Bit Much, is hitting shelves next week. I selected it as one of my Daily Hive June picks, published this morning.

The book is aimed at fans of Sally Rooney and Ottessa Moshfegh, and follows a protagonist named Alice, a young girl in her twenties whose life is quite frankly, falling apart. She's lost her appetite, ability to sleep, and fears losing her ride-or-die best friend, Mia.

I first heard of Sarah's novel through a publishing contact, and as soon as I read the blurb, I absolutely had to read the book. A full review will follow soon, but in the meantime, Sarah and I caught up to talk about the book, that striking cover design by Kate Sinclair, and her journey into publishing.

Congratulations on your debut! You’re a publishing professional by day and a writer by night. Tell me more about your day job and how you found yourself working in the publishing industry.

I’m an associate editor—to put it simply, I acquire and edit books. I wouldn’t say I’m an editor by day, writer by night because I’m also often an editor by night! It’s more like I’m a writer on my vacation days and occasional weekends!

After university, I had a few administrative jobs and a series of temp jobs, but I hoped to eventually work with books, in some way. I took a publishing course and did a couple of internships in publishing before I was offered a three-month contract position to help file and pack up boxes to prepare for an office move, where I also had the opportunity to review manuscripts on submission.

After a few contracts, I was eventually hired as a full time assistant. Now I get to work with incredible writers, and oddly that would have probably never happened if the company hadn’t been preparing for a move at the end of my internship—there aren’t many openings in editorial, and I always tell people who have trouble finding a job in publishing that timing is a big part of landing a publishing job. I’m definitely lucky in that sense.

A Bit Much follows protagonist Alice, as complex gal in her twenties. The novel takes a close look at female friendships and new relationships. How have you adapted to maintaining connections throughout the pandemic?

In terms of maintaining connections, I’m not sure how well I’ve adapted. Like a lot of people, I’ve lost all concept of time during the pandemic. It’s strange because my friends have had babies I’ve never met, and I haven’t seen many of my friends for over two years. Though this is the case for a lot of people. I think everyone is sort of over video calling, and it can get exhausting telling everyone how you’re holding up after more than two years.

For me, I think dumb little memes and videos are stand-ins for asking someone how they’re doing sometimes. If I send someone a video of a boar running by a dumpster with their tiny boar babies, I am telling that person “I miss you!”

The first thing that drew me to your book was that it was geared toward fans of Sally Rooney — she’s my favourite. Have you drawn inspiration from Rooney in your writing?

While I love Sally Rooney’s novels, technically, no, and I say that because I finished the first draft of this novel in 2014 before I could read any of them. Writing this book has been a long process. I wrote the first chapter in 2010 and then put it away for a year. I worked on it for a few months in 2011 and then didn’t touch it again for a few years. I tried to forget about it for almost five years before picking it up again in 2019 and working on it fairly regularly (on some of my days off from my job); I cut about half of the draft from 2014, made revisions and worked with my editor, Deborah Sun de le Cruz, to fine-tune the novel that will hit shelves in June.

I’m drawn to book cover design, and have had many of the Penguin Random House designers as guests on my blog. I love the cover! Who designed it and what was the process like?

Kate Sinclair designed it. She is a super genius! I can’t comment on her process, but I provided some examples of covers I liked. I also mentioned that I wanted to avoid hospital imagery and that, if possible, it would be great to have the humour in the book reflected in the cover. I love the cover—Kate did an amazing job.

I envy that you get to work with so many wonderful writers in your job. Who are some of your most memorable clients?

I get to work with so many talented writers, and I’ve worked on many different books. They are all memorable—I could never just pick a few! I know! How boring of me!

My reading list is growing, and a book I’m really looking forward to is Lessons by Ian McEwan, forthcoming this September. What are you most excited for?

There are far too many good books coming out later in 2022, but I’ll name a few I’m excited to read: Lapnova by Ottessa Moshfegh, Utopia by Heidi Sopinka, Sweet, Soft, Plenty Rhythm by Laura Warrell, Dogs of Summer by Andrea Abreu, Minique by Anna Maxymiw, and Jones by Neil Smith. 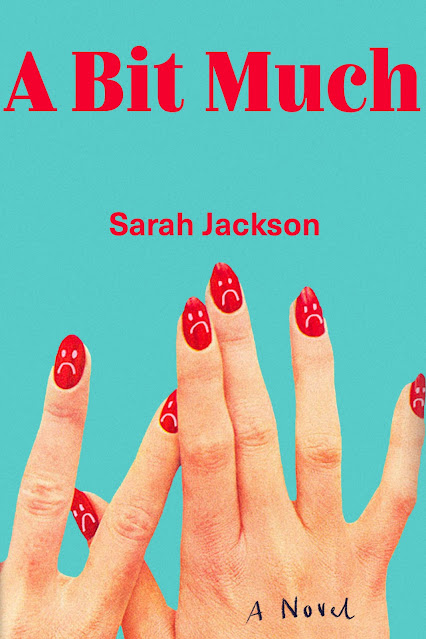 A Bit Much by Sarah Jackson is out June 6th and is available for order in hardcover format from Indigo and e-book and format from Kobo. Check Penguin Random House Canada for additional retailers.

Stay tuned for my interview with Kate Sinclair and full review of A Bit Much later this month.