Skip to main content
Labels
Posted by Sean Loughran May 04, 2022

Vladimir by Julia May Jonas

“Dazzling, explosive, pitch-dark, and blinding light, like a steamroller, like a hummingbird, in the body, in the atmosphere, in the currents of our blood, on the street corners, hidden in melodies, in smells and dropping temperatures and rising speed. In rooms we forgot we've inhabited, clothing we forgot we owned, touch we forgot we felt.”

Let’s start with the cover, shall we?

Team work makes the dream work — designed by the talented Rodrigo Corral, art directed by Alison Forner, and photographed by Molly Matalon. You can learn more about the cover design process by watching this video by the Simon & Schuster team featuring CEO Jonathan Karp.

I was initially attracted to this book by its enticing cover design and further drawn to it after reading some of the reviews, including one from Roxane Gay, who stated in her four-star review that it was a “fun read, especially for academics.” Also, literary publication Kirkus stated in their starred review that it was “a remarkable debut.”

Author Julia May Jonas has crafted a unique and brilliant narrative with Vladimir. She does so with a sharp and captivating prose. 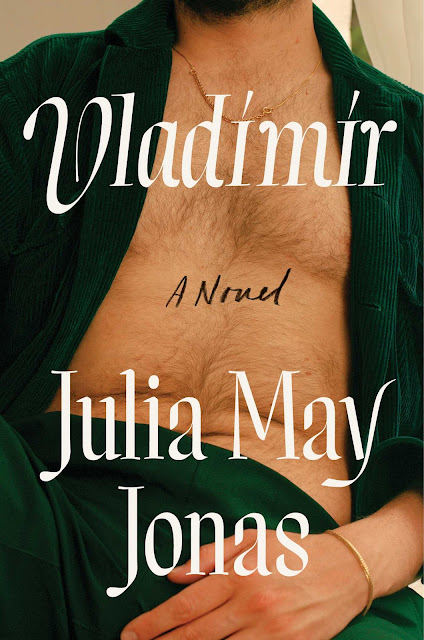 Readers meet an unnamed narrator on the opening pages. She's a well-educated fifty-eight-year-old writer and professor of English at a small liberal arts college. Her husband John has been accused of several claims of sexual misconduct. At the start of the spring semester, John’s department was handed a petition requesting his removal — one that included affidavits from seven women of various ages, all former students, who had engaged with him sexually.

Our narrator and John are in an open relationship — as “sexually free” as they like during their marriage. Their affinity comes across as more of an arrangement, or as she describes it, “John and I maintained a distant relationship when we were at home—more of a sharing space than a true living together, more roommates than spouses.”

We then meet an endearing man named Vladimir “Vlad” Vladinski early on in the book. A forty-year-old experimental novelist and junior professor. Vladinski, Ivy League educated, is the son of Russian émigrés, has volunteered for the peace corps and spent time in Africa. He's known for his writing talents, having been through the best MFA writing program in the country, and has already released his debut to critical acclaim. I found him quite charming.

His wife, Cynthia is also a writer, working on her memoir with HarperCollins. The narrator’s seething jealousy can almost be felt through the pages. Her first book took off while her second flopped, and these, days, despite her dreams of being a literary success, she fills her free time writing book reviews for the local newspaper.

We learn of our protagonist's growing obsession with Vlad early on. There’s a wittiness to how she tells her story, and I grew to like her as she developed, very much enjoying her anecdotal tales. I found myself with a craving for more of her as the story drew onward. Although, my heart did ache for her at times.

I loved how the story was told through the eyes of the narrator. It felt intimate, as though I was reading her diary.

As for Jonas, she brings the scenes to life, each one visually constructed through her imaginative prose, almost inviting the reader to step into each act with her. Closing our eyes, we can visualize our narrator in each situation, sitting with her as she reads a manuscript at the university library or joining her for a gin and tonic at home with Vlad, John and Phee.

Overall, I found Vladimir to be an addictive read. To be honest, I was entirely absorbed. I curled up in the corner of my couch and let each mug of coffee go cold. If it hadn't been for my cat reminding me of her feeding schedule, I would have entirely lost track of the time.

Books like Vladimir are reminders of why I created this blog, and why I love talking and writing about books. I enjoy an original and imaginative work of fiction that takes my mind away from the stresses of the day — and Julia May Jonas did the trick. Vladimir was a spectacular debut. I was struck by Jonas' writing talents and her broad use of grammar. She inspired me to work on my own book.

My thanks to Simon & Schuster indulging me with this wonderful read.

Julia May Jonas is a playwright and teaches theater at Skidmore College. She holds an MFA in playwriting from Columbia University and lives in Brooklyn with her family. Vladimir is her debut novel.

Vladimir is available in hardcover format from Indigo or e-book format from Kobo. Check Simon & Schuster Canada for all other retailers.