Skip to main content
Labels
Posted by Sean Loughran May 06, 2022

In conversation with Steph Jagger

Steph Jagger is a sought-after mentor and coach whose offerings guide people toward a deeper understanding of themselves and their stories. Her work, including speaking and facilitating, lies at the intersection of loss, the nature of deep remembrance, and the personal journey of re-creation.

Steph grew up in Vancouver, Canada and now lives and works on Bainbridge Island, WA. Everything Left to Remember is Steph's second book. Her debut, Unbound, was published in 2017, and received advanced praise from many, including author Becky Wade, who said it was a “captivating read that demonstrates the value in following one’s heart beyond the beaten path.”

A visit to Steph's website left me yearning for a conversation with the author. I felt her warm embrace through her written word. “all of you is invited here, allowed here, welcome and wanted in this space,” she says. Jagger goes on to talk about herself in detail, opening up entirely. Steph's openness about her mental illness is what drew me to her, “I suffered from depression," she states, “Mental health is important to me.”

The final message: “I love myself.”

Steph and I connected over email to discuss her new memoir, Everything Left to Remember, a book she wrote as she watched her mother battle dementia. We discussed the writing challenges, one of the most memorable moments from a trip she took with her mom, and what she hopes readers take away from her book.

Steph, thanks for chatting with me today. Congratulations on the release of your new memoir. What inspired you to write Everything Left to Remember and what challenges did you encounter in the writing process?

I’m not sure I felt inspired as much as called to write the book. When I was on the plane home from the trip with my mom, I found myself typing notes into an app on my phone. I could barely keep up with my thoughts. And by the time we landed, it was almost like I could hear a voice telling me to keep writing, that this was a book.

I know this sounds strange but when I hear voices like that, I try my best to do what they are telling me to do. And I suppose that’s the definition of inspiration, in the original sense of the word, “to follow divine guidance”.

The biggest challenge by far in the writing process were the encounters with my own grief. To sit inside of your own grief is one thing, like to lock eyes with it and allow it to take up space in your life, but to attempt to make sense of anything or to translate any of it, while you’re sitting inside of it is... well, it’s one of the hardest and most rewarding things I’ve ever done.

You and your mother took several trips through national parks and mountains, which I’m sure were breathtaking. What trip was the most memorable for you?

There is a singular image from all of the adventures that stands out in my mind. I had just returned from a quick trip to the bathroom to find my mother alone on a bench. Sitting straight backed in her red sweater, staring at Old Faithful, the world’s most famous geyser.

The geyser was still steaming from having just erupted, and the throngs of people who had gathered to watch had all walked away. Everyone but my mother. I stood there for some time, just watching as she and the geyser had, what seemed like a conversation, as they swam together in the slipstream of some silent language, some silent knowing.

I think I hold onto that memory because it makes me feel as if my mother is okay. That she’s able to sit for hours on end in her care facility, perhaps not as straight backed as before, but still in awe of the world in front of her, still conversing with it in some way.

What do you hope readers take away from your memoir?

I hope readers take away a felt sense that we are all going to be okay. No matter what. Through life and death. Through pandemics and wars. Through diseases, endings, beginnings and transitions of all kinds. That even when we’re not okay, something at our core is.

We live in a world that seems hellbent on reminding us of just how bad things are. And, listen, I don’t want to be lied to, I want the truth, but I also want to be held a little within it, comforted here and there. I find myself craving voices who are willing to say, “This is hard and still, within the darkness, there is beauty to be found.” My hope for the book is that it serves as one of those voices.

I read your about me page, and I felt touched by what you wrote. You open up about your struggle with depression. What resources do you recommend for those who are also struggling?

In 2020, the Government of Canada reported that one in three Canadians will be affected by a mental illness in their lifetime. This is not a problem that should be pushed onto individuals to tackle or to attempt to resource themselves through, but a problem we need to face as a collective, on a cultural level. I’m not a mental health expert but my guess is that most medical professionals would agree that illness will be high (including mental illness) in cultures that bury their pain.

My belief is that, as a collective, the biggest resource we have is to find new ways to process pain, and to learn to excavate past pain carefully and with compassion.

Tell me the last book you read and one thing you loved about it.

I recently re-read Belonging by another Canadian author, Toko-pa Turner. In it, she defines the time we are living in as a Great Forgetting— a time where “. . . communications from the body are medicated away, feeling has no voice in boardrooms, ritual has become empty and disconnected from nature, and of course the earth is treated as a resource for profit.” What I love about the book is the way in which she invites us to wake up and step back into remembrance. 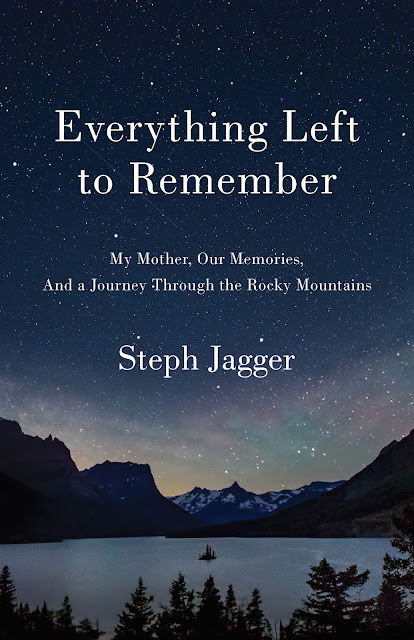 Everything Left to Remember is available in hardcover at Indigo or e-book format from Kobo. For all other retailers and formats, check Steph Jagger's website.

Labels: in conversation with memoir
Location: Vancouver, BC, Canada