Skip to main content
Labels
Posted by Sean Loughran May 16, 2022

In conversation with Elamin Abdelmahmoud

Elamin Abdelmahmoud is well-known across the nation as the host of CBC's pop culture show Pop Chat, and for his contributions to BuzzFeed News, Rolling Stone, The Globe and Mail, and other leading publications.

His memoir, out tomorrow with McClelland & Stewart, is told through a collection of moving essays chronicling Elamin's arrival in Canada at age twelve from Sudan to his rise as one of the country’s most beloved media personalities.

Son of Elsewhere is a one-of-a-kind reflection on Blackness, faith, and the challenges and rewards of finding your way in the world. The book has received glowing praise from many, including Scotiabank Giller Prize‒winning author Omar El Akkad, who said “it was the sort of book that can only come from a writer both incisive and open-hearted. Abdelmahmoud, to our great fortune, is both.”

Elamin and I caught up ahead of the book's release to talk about some of his earliest memories of Canada, the barriers and challenges we have both faced in our writing, and how he handles rejection. He also shared some of his favourite authors.

You moved to here at age twelve from Sudan. What's your earliest memory of Canada?
Probably a collage of memories from the first day — the arrival hall in Pearson Airport; my dad and the small armada of people waiting to greet us; the first time the car merged onto highway 401; the first rest stop between the airport and Kingston, when my dad ordered a coffee and I realized he speaks English now, and I am going to have to learn to speak it, too.
In your new memoir, Son of Elsewhere, you talk of yearning to belong at a time and place that made belonging difficult. If you could talk to your younger self, what would you tell him?
I would tell him to start a skincare routine a little earlier! But with regards to belonging, I think I would say: trust that you’ll find your people, the people who won’t make you feel small. Trust that they got you. I’d probably say it in an annoying way, though, I’d say something like “Elton John said ‘I thank the lord for the people that I have found,’ and honestly, that’s the whole ballgame.”
What are you hoping readers take away from the book?
That no one talks about The O.C. enough. That the very presence of Mo Salah changes everything. That highways are where you go to cry. But mostly this: we have these fixed, capitalized notions of identities like Black, Muslim, Immigrant, but sometimes those ideas are fluid, and you can both identify with them and stand outside of them, and this will look different for everyone.
You currently host CBC's Pop Chat and write for BuzzFeed. What barriers did you encounter when entering the journalism field?
There’s a frustrating and seemingly mandatory period of time where you have ideas you believe in, that you know you can execute well, but you haven’t found the right person who believes in those ideas and your ability to pull them off. Have patience, that stretch is hella tough.
In our line of work, rejection is unfortunately common. How do you handle it?
By being a serial pest. I pride myself in handling rejection and failure well, and part of that is I am incessant about asking why the rejection happened. If it’s a no, fine, but tell me why! Why didn’t the pitch work? Why didn’t the idea work? Was it the idea itself or the presentation of it? Do I need to do more explanation and development? Great! That’s an answer.
Disappointment is a part of doing this work, and it’s natural, but I mostly deal with it by wondering whether the rejection happened because of something in my control, or entirely outside of it.
Do you have a favourite author?
Imagine if I could recommend just one? Not a chance! I’ve learned a lot from reading writers like Hanif Abdurraqib and Rachel Cusk. I frequently return to Zadie Smith. I reread Rebecca Solnit a lot. I think a big part of the job is reading a lot — the best thing I’ve done for myself as a writer is just learning to read more widely.
There are so many authors whose work didn’t particularly resonate with me, but I walked away from their writing thinking “huh… I didn’t know you could do that! Let’s try it.” That’s a great feeling. 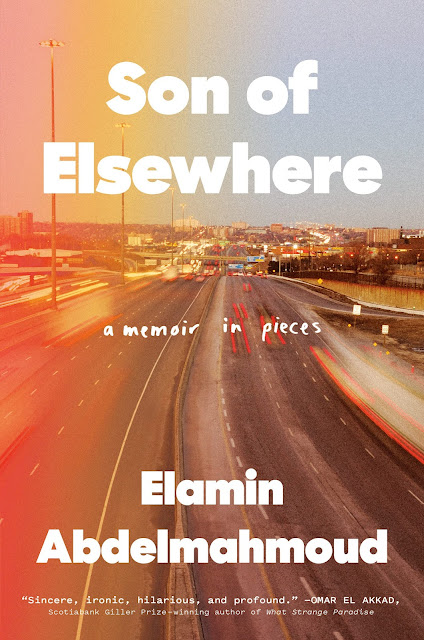 Son of Elsewhere by Elamin Abdelmahmoud is available for purchase in hardcover edition from Indigo and in e-book and audiobook format from Kobo. Check Penguin Random House Canada for additional retailers.