Skip to main content
Labels
Posted by Sean Loughran May 02, 2022

In conversation with Andrea Werhun

Andrea Werhun is a writer, performer, and sex worker advocate in Toronto. She's the author & co-creator of Modern Whore: A Memoir, which she crafted in collaboration with filmmaker Nicole Bazuin. It's the second edition of the book, published by Penguin Random House Canada. The first edition was adapted into an award-winning short film directed by Bazuin.

Werhun has been interviewed by The New York Times, The Guardian, Daily Mail, VICE, and many other publications. She also posed nude alongside her essay about sex work for the 65th Anniversary issue of Playboy.

In addition to Andrea's creative pursuits, she also previously worked as a peer outreach worker with Maggie's in Toronto, a non-profit run by, and for sex workers. They offer non-judgmental peer support services and programming.

Andrea has given university lectures, led workshops, hosted and participated on panels, and performed readings of her work. She holds an undergraduate degree from the University of Toronto, with a major in English.

I connected with Andrea over email last month to discuss the challenges and creative process involved with bringing Modern Whore to life, what her outreach work at Maggie's looks like as well as how others can get involved. Andrea also shared some of her favourite spots in Toronto.

You released a book of the same name in 2018. How does this second edition differ from the first?

Well, the first edition of Modern Whore told the tale of my two years working as an escort. The second, expanded edition – or as we like to call it, the engorged edition – includes stories from the three subsequent years I worked as a stripper until the start of the COVID-19 pandemic in 2020.

The second edition is a more fulsome reflection of my experience in the sex industry, because stripping and escorting are such different occupations.

What makes the second edition so special to me is that it spans ten years of my life, and five years of sex work experience. I escorted from the ages of 21-23, danced from 27-30, wrote the first edition in my mid-twenties and the second at the age of 31, in the middle of the pandemic.

I think my writing matures as the book progresses, along with my life experiences. I hope the reader enjoys the ride, too.

There are more obvious differences between the first and second editions; the former was self-published by Nicole and I, while the second is being released by the biggest publisher in Canada. A soft cover is now a hard cover. One hundred fifty pages has become 300, with even more luscious photography by Nicole. The engorged edition of Modern Whore is a fully-realized explosion of literary and visual delight.

What was the most challenging part of penning your memoir?

As a memoirist, I find it incredibly easy to talk about myself. The problem with telling my own stories is that sometimes they involve other people. Consent is important, but so is telling the truth.

All names and verifying details about my clients, co-workers, bosses, and others have been changed to protect their identities – unless [they] specifically requested that I use their real names. The other challenge of writing a memoir is implicating people, or unintentionally depicting them in unflattering ways.

I love my mother with all my heart, and I know it comes through in the work, but I also know there are stories from my childhood she would have preferred me to leave out. She gets it, though – the truth is, things happened, and I’m entitled to tell my story. I just have to be mindful of whom I might hurt along the way, and be prepared to own (and atone for) that.

A collaborative effort with photographer Nicole Bazuin, who you’ve worked with for a handful of years on documentaries like Last Night at the Strip Club and the Modern Whore short film. What was the creative process like for this book?

Nicole is the visionary force behind Modern Whore. Our collaboration started with the first edition of the book, which took a couple of years to pull off. Then, we made the short film Modern Whore, directed by her and staring me, followed by Last Night at the Strip Club.

As mentioned, the first edition of the Modern Whore was self-published, so we had full control over every facet of production. Working with Penguin Random House Canada on the second edition meant having a whole team on board to help us, which has been an incredible experience.

Besides conceptualizing the imagery and taking all the photos on film, Nicole also worked closely with our book designers, Laura Rojas on the first edition and Lisa Jagger on the second, to bring her luscious vision to life.

All I do is live and tell the tale; Nicole lets her imagination fly. We go back and forth on visual ideas, I pose, she shoots. A pretty effective creative process, I think! That she’s also my wife makes it that much more fulfilling, too.

You previously worked as an outreach worker at Maggie's Toronto. What did your work there look like and how can others get involved and support the organization?

Doing harm reduction as a peer outreach worker with Maggie’s for the last four years has been one of the great joys of my life. My peers are a small and scrappy group of current and former sex workers whose wide range of lived experiences – like houselessness, outdoor sex work, and long-term drug use – means getting out on the street and strolls to talk directly to the people most impacted by these issues.

Before the program ended on March 31st of 2022, we handed out safer sex and drug use supplies, naloxone, water, food, warm clothing, socks, PPE, and access to resources provided by Maggie’s and other harm reduction organizations in the city.

You can support Maggie’s by donating here, and get involved by signing up for their newsletter.

You live and work in Toronto. What’s an ideal day out in the city? Tell me some of your favourite coffee shops, bookstores, and haunts.

I love the waterfront. In the summertime, the whole stretch of boardwalk between Ontario Place and Sunnyside feels like a resort. Maybe not a five-star resort, but one I don’t have to pay for? I’ll take it!

I am an open aficionado of all city animal life – pigeons, squirrels, chipmunks, geese, ducks – and all my furry and feathered friends congregate by the water. Watching them interact provides endless entertainment. Forget people watching. You can find me cooing with the pigeons.

Picnics on the beach are so incredibly lovely, but be warned that the water treatment facility is nearby and Sunnyside can pick up the occasional shit wind. Again, it’s FREE.

After a day on the water, a walk up Roncey is in order. I highly recommend the iconic Another Story Bookshop for all your literary needs. Since they only carry books worth reading, you won’t be leaving empty-handed. 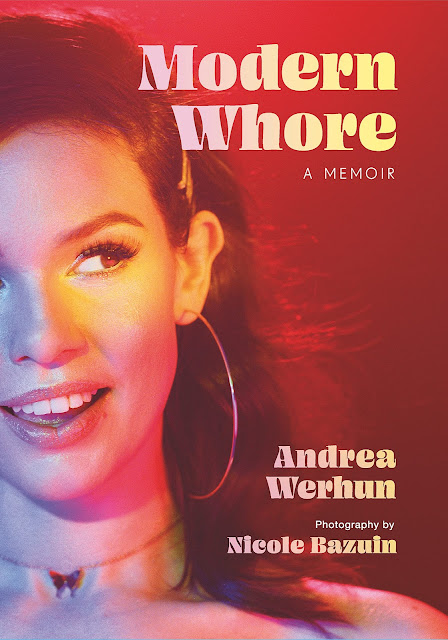 Modern Whore by Andrea Werhun and Nicole Bazuin is out tomorrow. It's available for order in hardcover edition at Indigo or in e-book and audiobook format from Kobo. Check Penguin Random House Canada for additional retailers.