Skip to main content
Labels
Posted by Sean Loughran May 15, 2022

I quickly learned what it was when they ordered one for me. I compared it to the Bloody Mary I was served on the British Airways flight from London to Toronto a few days earlier. They were both mortified, and a little humoured by my remark.

I've been living in Canada for six years now, and I've come to learn a lot about the Caesar. I enjoy venturing out to new restaurants for brunch, and it's typically the first thing I notice on a menu. I recently went to The Score on Davie, renowned for their Caesars, and I was gobsmacked by their selection. They have a Caesar called The Checkmate, with two burgers served on top, literally.

To further my knowledge of Caesars, and bring you some fresh content for a Sunday morning, I wanted to share a recent book that came my way via Appetite (Penguin Random House Canada). 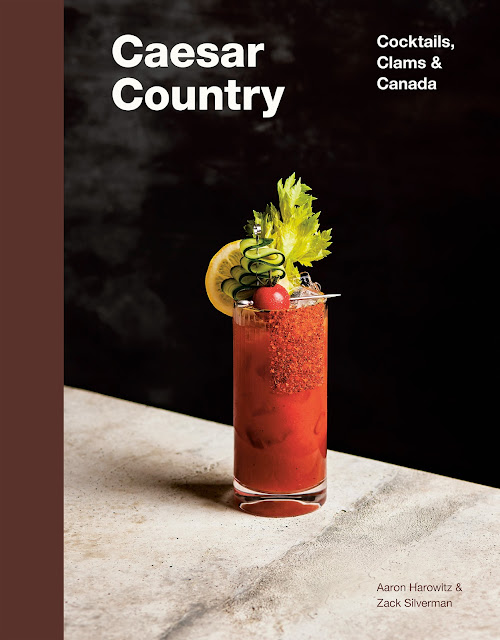 The two were inspired by their travels across Canada, the places they had seen and people they had met, and came together to collaborate on a stunning book featuring a wonderful collection of cocktail and food recipes.

Within Caesar country are contributions from some of Canada's top bartenders, chefs, and icons, including Chuck Hughes, Craig Wong, Donna Dooher, and even our own superstar, Ryan Reynolds. I was gifted a bottle of Aviation Gin yesterday, which I'm very excited about.

I received an advanced copy of the book to dive into ahead of the release.

As someone with an eye for design, what first caught my eye when I opened the book, was the array of beautiful photography, featuring images from around Canada. Ice capped mountains, wooded forests, lakes, and rivers. A sign that this book is for all seasons. It was actually designed by Aaron Harowitz himself, and the cocktail and food photography is by Tanya Pilgrim.

The book starts out with an introduction, dated September 3, 2013 at 3:22 a.m. Aaron and Zach are at a bottling plant in Toronto observing a stack of skids containing about 8,000 bottles of Caesar mix that have just come off the line. They had just poured (pardon the pun), their entire life savings into the first-ever batch of Walter Caesar mix with the idea of reinventing Canada's national drink.

Readers then move forward to 2021, and the boys are now selling enough Caesar mix to make more than 6 million craft Caesars. I love a book that starts with a success story.

“The recipes in this book are arranged geographically, tracing a journey from west to east and then north. We asked bartenders, chefs, purveyors, and other people with a variety of backgrounds, food philosophies, natural environments, local ingredients, and techniques to share their recipes, showing us how the Caesar can be pushed and stretched and reinvented.”

Aaron and Zach take readers on a brilliant history lesson on the history of the Caesar, and how it came to be Canada's National cocktail. They also touch on my earlier point, “One simple way to define a Caesar is that it’s not a Bloody Mary.” What did I know? I wasn't Canadian, yet. I'm now a proud holder of a permanent resident card. And I've had my initiation Caesar. We used to have so much fun at my first job setting up Caesar bars at 3 o'clock on a Friday.

Caesar Country is exquisitely detailed, more so than I would have imagined before opening the book. Beyond the history lesson, Harowitz and Silverman also talk about the theory and practice of crafting quality cocktails, and offer step-by-step guides. They go into detail about balancing the different flavours of a Caesar — sweet, sour, bitter, salty, etc. with each flavour explained.

Before the reader reaches the recipes, Aaron and Zach lay out the components of a Caesar — the base mix, base spirits & modifiers, flavour additions, the rim, garnish, and of course, ice. I've seen many variations of the Caesar both in Vancouver and Toronto, where I've spent most of my time in Canada, but also in Halifax and Edmonton, where I've also spent some time. Albeit, Edmonton was only at an airport and the Caesar I saw there is definitely not worth writing about.

I found this part of the book quite fascinating, learning about the different components, because when ordering a Caesar at a bar, be it for me, or someone else, I actually don't really have much knowledge about its ingredients.

What was also interesting is that the authors talk about the Caesar as a hangover cure, much like we would use the Bloody Mary as a hangover cure in the UK and Ireland. They don't promise it as the perfect cure for hangovers, but do include some research, and suggest that more is needed.

The book then moves onto tools and equipment. When my partner got a new bar at home, he was gifted a bunch of bar equipment, so I was surprised to find we already own the majority of the tools mentioned in the book. What you'll discover is that you don't actually need a lot to conquer the recipes in this book.

I was thrilled when I reached the recipes for both food and beverages. While the Caesar recipes were wonderful, and unlike anything I had come across on a restaurant menu before, the food recipes also stood out and could have been a separate book entirely.

The first food receipe I came across is from one of my favourite restaurants in Vancouver. It's for Steelhead Ceviche, a contribution by Reuben Major at The Belgard Kitchen. Other recipes include Caesar Wedge Salad with Grilled Jerk Shrimp from Craig Wong of Patois Restaurant & Bar Mignonette in Toronto.

All in all, Caesar Country is a brilliant exploration of Canada's National Cocktail. It also has some wonderful memoir aspects since it includes brilliant tales from Aaron and Zack's life, their growing up in Richmond, and how they started their business.

You'll find the most in-depth information about Caesars — everything from what you need to have in your pantry and fridge, to what you need to make them. The book contains an array of recipes from classics to more adventurous options. Again, the photography from coast to coast adds another layer of beauty to this book. The reader will come across various landmarks around Canada, all the way from Stanley Park to Peggy's Cove.

As Chuck Hughes said, “[This is] the ultimate Caesar bible.” Caesar Country also makes for a great gift for friends and loved ones. With Father's Day approaching, it's the perfect book for dad.

Since I just received a bottle of Aviation, I chose a recipe by Ryan Reynolds from the book to share with you today. It's called The Crescent Caesar. The below quote and receipe is excerpted from the book.

“To me, the taste of a Caesar is the taste of home. It’s the quintessential Canadian cocktail and one of the first drinks I ever had. We lived on Crescent Drive, hence the name,” Vancouver native Ryan Reynolds tells us. “My recipe is a Caesar Gin Martini, made dirty. My lawyers said I am contractually obliged to make it with Aviation gin so I did but—don’t tell them—I would make it with Aviation regardless because it’s delicious. The citrus and floral notes of Aviation balance the savoury flavour of Walter and keep the salty olive brine in check. Enjoy!”

Glassware
1 coupe, chilled
Cocktail
2½ oz (75 ml) Aviation American Gin
½ oz (15 ml) dry (white) vermouth
½ oz (15 ml) Caesar mix, Mild
¼ oz (7.5 ml) lemon juice, finely strained
1 tsp olive brine
Garnish
lemon peel (1 to 2 inches/
2.5 to 5 cm long)
or 3 olives, on a skewer
1. Pour the gin, vermouth, Caesar mix, lemon juice, and olive brine into a cocktail shaker. Fill the shaker with ice to just above the top of the liquid and stir with a bar spoon until the outside of the shaker is very cold to the touch.
2. Strain the contents of the shaker into the chilled glass and garnish with the lemon peel and olive skewer.