In conversation with Tory Henwood Hoen

Tory Henwood Hoen is a Brooklyn-based writer and graduate of Brown University. Her work has been published by New York Magazine, Condé Nast Traveler, Bon Appéit, and many other leading publications. Hoen spent five years working as Creative Director of brand at workwear company M.M. LaFleur, where she founded the brand's digital magazine, The M Dash.

I first heard of Tory at the beginning of this year, when I was granted access to an advanced copy of her debut novel, The Arc. The pandemic was really starting to wear me down, and I had gone from reading almost two hundred books last year, to completely losing my desire to read. My friends in the publishing industry were still mailing me books, and as the packages piled up at the door, along with them grew my avoidance and anxiety. To be honest, I just didn't want to read anymore.

Drawing a bath one morning, I decided to take my Kindle with me. Flipping it open, I was reminded of a digital copy of The Arc awaiting my review.

I was initially drawn to the book by its cover, designed by a previous AD guest, Olga Grlic, and I thought if nothing else, I could at least review it on its brilliant cover design.

Within moments, however, I had fallen head over heels for the protagonist, and felt an instant connection to Tory. I finished the book that same day, and my love for reading had been reignited. It was the right book at the right at time, and I felt as though it had been written for me.

Since reading, I've talked about The Arc endlessly to anyone who will hear me out. As soon as I got my hands on a physical copy, I mailed it to my mum in Ireland with a note “please read immediately.”

Apologies to bookstore workers for what I’m about to divulge, but I have been prone to moving Tory's debut around on the shelf, so it's always front and centre. I’ve done this with other favourites too. But my love for this book really goes beyond what I can express with words.

With all that said, I'm delighted to have Tory joining me on In Conversation With today. We're talking about the inspiration for The Arc, the cover design process, her unforgettable protagonist, and the last book she read.

What inspired you to write The Arc?

I had always dreamed of writing a novel, but it took me about two decades to muster the courage to go for it. Since I graduated from college, I had held writing-related jobs (at a communications agency, then at various magazines, then as the brand director of a fashion startup), but I had never attempted fiction, and I certainly had never written anything novel-length. I didn’t know if I would be able to pull it off, but it was also the thing I most wanted to succeed at—so I was paralyzed for a while between my aspiration and my fear.

In my mid-30s, I reached a tipping point. My frustration with myself for not trying began to outweigh my fear of failing. I was also burned out and ready for a change of pace, professionally. So I left the job I had been at for five years, and I leapt into the abyss. I didn’t have a book idea at that time, so my first few months of freelance life were really nerve-wracking, and I wondered if I had made a huge mistake. But after about six months, the concept for The Arc began to crystallize.

In addition to taking this professional leap, I had also gone through a break-up that year.  So at 35, I was using dating apps for the first time in my life. I braced myself for the worst, but I actually found them fun and fascinating at first. I approached dating like an anthropological experiment. But after a few months, I began to realize how limited the apps were, and I kept thinking, “Someone should invent a more sophisticated version of this…”

That’s where the seed of idea for The Arc came from: a service that uses a wild combination of psychological, emotional, and physiological tests to assess clients and then match them. Those of us who have experienced “dating fatigue” know what it’s like to wish you could just outsource the search for a partner. Mentally, that’s where Ursula is when we first meet her.

Since this was my first attempt at fiction, I set two simple goals: (1) finish a first draft. It didn’t have to be good; it just had to be finished. (2) Have fun. I figured that if I had fun writing it, readers would have fun reading it. I wanted this book to be an enjoyable, wild ride—that’s why I folded so much humor and satire into the story.

But as I wrote, I realized I had a third ambition as well. I wanted to create a love story with real emotional heft. I wrote this book not because I had the answers when it comes to love, but because I had a lot of questions. Ursula and Rafael’s relationship became the vehicle through which I got to explore those questions.

A previous guest on my blog, Art Director Olga Grlic, designed the eye-catching cover. What did the design process look like?

This cover was actually a last-minute surprise, and I’m so happy with it. We had been working for months with another designer on a totally different concept that was a bit more cute and approachable. I liked it, but it didn’t have the gravitas that Olga’s cover has. At the very last minute, my publisher asked if I wanted to consider Olga’s design instead, and the minute I saw it, I thought, “That’s my book.” It was such an easy decision. We didn’t have to make a single change.

Something about Olga’s design reminded me of the scene in Ferris Bueller’s Day Off when Ferris and Sloane are making out at the Art Institute of Chicago. I always loved the mood of that scene, and I think this cover conveys a similarly complex mood.

Ursula Byrne is a protagonist that I hold close to my heart. I tell everyone about her, and how she’s literally me, but in female form. When I was reading about The Stake, I was thinking about how I would totally be a member of a club like that if it existed here. It’s so far-fetched and brilliant! I’m curious, if Ursula was real, what kind of books would she be reading?

Ursula is a woman of wide-ranging tastes that are a bit unpredictable. Her library would include experimental fiction (Sheila Heti, Lydia Davis), dark humor (Ottessa Moshfegh, Grant Ginder), and dystopian literature (Margaret Atwood, George Orwell). She would also have a heavily dog-eared copy of Women Who Run With the Wolves (Clarissa Pinkola Estés), and a book called Crafting with Cat Hair (Kaori Tsutaya) that someone would have given her as a joke.

As a child, she probably read the requisites for precocious girls (Eloise, Matilda), some animal-focused classics (The Wind in the Willows, anything by William Steig), and poetry (Shel Silverstein, Dr. Seuss).

I worked for a Silicon Valley startup for a period, and you captured it so well with companies like Indubitably, Bro-lex, and of course the high-end match making service that Ursula and Raphael use. Did you ever work in the tech industry or just research it thoroughly?

I never explicitly worked in tech, but I worked at a direct-to-consumer retail startup from 2013-2018, which was the era when pretty much all startups began considering themselves to be “tech companies.” (As in: “We’re not a mattress company. We’re a tech company that sells mattresses…” etc.) It was a way of signalling to investors that your company could scale, but it was also a mentality that allowed fledgling businesses to take themselves seriously. Sometimes too seriously!

I had a wonderful experience at the company where I worked (M.M. LaFleur), but as I circulated in that world, I got a taste for what the more obnoxious-side of startups could look and sound like. So I took a few real-life experiences and characters, and then pushed them to extreme as I built out Ursula’s professional world.

We both lived in Paris, worked in the fashion industry in New York, and we’re both writers. I’m currently penning my debut. What’s next for you?

Congrats! I’m back to the drawing board at that moment, working on my second novel. It’s unrelated to The Arc, but there may be some similar themes. I’m also in the very early stages of working with Netflix to develop The Arc into a TV series! Hopefully I can share more about that soon.

What’s the last book you read?

Edie Richter Is Not Alone by Rebecca Handler. First of all, it’s short, and there’s nothing I love more than a short novel. Second, it’s both sneakily funny and emotionally astute. I love that bittersweet balance—the line between laughing and crying.

Right now, I’m halfway through Vladimir by Julia May Jonas, which is sharp and sexy and also short! It’s perfect bathtub reading. 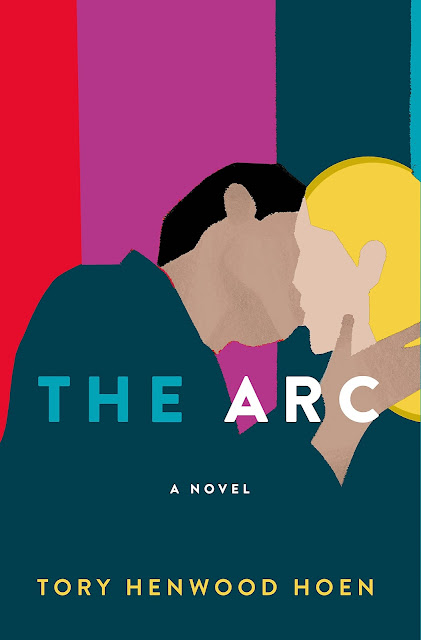 The Arc is available for purchase in hardcover format from Indigo or e-book and audiobook format from Kobo. Check MacMillan for additional retailers.