In conversation with Peng Shepherd

Peng Shepherd is the acclaimed author of The Book of M, which won the 2019 Neukom Institute for Literary Arts Award for Debut Speculative Fiction, and was chosen as a Best Book of the Year by Amazon, Elle, Refinery29, and The Verge.

The book received rave reviews from leading publications such as Library Journal, who stated that it was "an engaging and twisty tale", and Bustle, who said it was "a beautiful and haunting story about the power of memory and the necessity of human connection, this book is a post-apocalyptic masterpiece and the one dystopian novel you really need to read."

Born and raised in Phoenix, Arizona, Shepherd is trained in classical ballet, and has lived all over the world. She's a graduate of the NYU MFA program and the recipient of the 2020 fellowship from the National Endowment of the Arts, as well as the Elizabeth George Foundation's emerging writers 2016 grant.

She released her highly anticipated second novel, The Cartographers, in March this year. It's an imaginative thriller about a young woman named Nell Young, whose whole life and greatest passion is cartography, the science or practice of drawing maps. The book has been met with the highest praise with a starred review from Publishers Weekly and advanced reviews from bestselling authors and critics.

I was delighted to chat with Peng about life after her debut, what inspired her to write about cartography in her second novel, the cover design process, five things she can't live without, and the most memorable character from a book she's read.

Congratulations on the release of The Cartographers. Your first novel, The Book of M, won a number of literary awards and was selected as best book of the year by many of the world’s leading publications. How did your life change after the release of your debut?

Thank you! The Book of M was very near to my heart when I wrote it, so it’s been really wonderful to see readers connect with the story and enjoy it so much. I’m so grateful for the reception it received.

In some ways, my life changed a lot after the release of The Book of M, and in other ways, it didn’t change much at all. I’m a full-time writer now, which is both thrilling and terrifying, but I also sit down at the same desk, in front of the same monitor, and face the same blank page, every day. That’s never going to change, no matter how well or not a book does—but I don’t think I want it to. That’s the best part.

Your second novel follows Nell Young, a young girl is devoted to the science and practice of making and using maps. Who or what inspired you to write about cartography?

I’m pretty sure I speak for almost everyone when I say I love maps and am fascinated by them. I don’t think anyone can resist glancing at one as they pass by, no matter what kind it is! Part of that irresistible impulse is our very human desire to orient ourselves and understand where we are in the world, but another part of it is our other very human desire for discovery—we’re always hoping there’s something new on a map that we haven’t seen or heard of, and can explore further. With The Cartographers, I really wanted to capture that feeling of possibility and adventure in a story.

The cover of the American edition of The Cartographers is remarkable. Who designed it and what was the creative process like?

It’s so gorgeous! It was designed by Helen Crawford-White of StudioHelen, who’s a brilliant illustrator.

The cover art process for The Cartographers was really interesting, because at first, we all thought it was going to be a really simple task. After all, it’s a book about maps—just stick a map on the cover! Except, every single map we tried to use didn’t look right. The attempts felt more like nonfiction textbooks, or biographies, or children’s books (not that there’s anything wrong with any of those genres! They’re just not this book’s genre, so the art always felt mismatched).

It wasn’t until we moved away from trying to get a map onto the cover at all that we hit upon the idea of depicting the shadowy, jumbled shelves of the library in the novel, and realized that feeling of mystery, secrecy, and dark academia was perfect.

As a writer, what are five things you can’t live without?

1. Scrivener! I write in messy chunks, and then spend ages dragging them around into different orders until the story suddenly snaps into place and makes sense, so Scrivener is a lifesaver.

2. Erasable pens. I don’t like the way pencils write, but I also hate having to scratch things out, which I do a lot while brainstorming, so erasable pens are the best of both worlds.

3. Mouse. Okay, does this happen to anyone else? When I use a laptop trackpad for too long, the pads of my fingers start to feel like they’re being burned! It’s like they’re both a little numb and over-sensitive to any texture at the same time. I have no idea why a trackpad would irritate them so badly, but it’s a terrible feeling, so I always use a mouse.

4. Coffee. It’s not so much about the caffeine for me as it is the ritual. I always have a cup in the morning as I sit down to write, and the smell of the drink, the warmth of the mug, and the act of slowly sipping it, help me get into the groove and ready to write.

You were born and raised in Phoenix, Arizona, and have travelled a large part of the world since then. Where is your favourite place and why?

That’s such a difficult question! I don’t know if I can pick just one, but if I can do a Top Five, they’d be: Tokyo, Oslo, Istanbul, Kuala Lumpur, and Mexico City, all for different reasons. Sometimes it’s the food, or the landscape, or the bustle of the streets.

Right now, I’m in the process of moving to that last one on the list, Mexico City, for a few years, which I’m really excited about!

Who is the most memorable character from a book you’ve read?

Right now, my answer is definitely Kaul Shaelinsan from Fonda Lee’s Green Bone Saga series! Shae is an incredibly tough, complicated woman torn between her beliefs and her love for and dedication to her family, the powerful leaders of the No Peak clan. And on top of that, she’s able to harness the essence of jade to make herself stronger, faster, or a better fighter. I loved her character in that series. 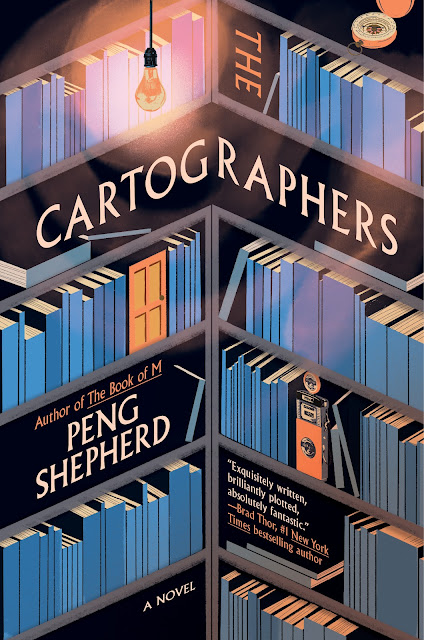 The Cartographers is available in hardcover format from Indigo. Check HarperCollins Canada for additional retailers.