In conversation with Amy Odell

Amy Odell is an author and fashion journalist. Her work has appeared in New York Magazine, The Economist’s 1843, Bloomberg Businessweek, and many other leading publications.

Her debut, Tales from the Back Row, was released in 2016, and received rave reviews from The New York Times, who called it “Self-deprecating and funny,” and Lauren Weisberger, who said it was “better than landing the most coveted seat at fashion week.”

Odell's latest, hitting shelves next week, is the definitive biography of Anna Wintour. The highly anticipated offering is based on extensive interviews with Wintour's closest friends and collaborators, including some of the biggest names in the industry. The result is the most revealing portrait of Anna Wintour ever published.

I grew up admiring Anna from afar, reading every copy of Vogue I could get my hands on, and dreaming that one day I'd walk the hallways of one of their many offices around the world.

I eventually landed a position working as First Assistant to an Editor at Vogue Hommes (there were three of us), and although I never worked directly with Anna, she still had a major influence on my career.

I have a tremendous amount of respect for Odell and what she's accomplished, not just through this book, but also in her writing career, and I'm delighted to welcome her to AD today ahead of the book's release.

Amy shared some incredible insights into the writing process, which came with several challenges, her thoughts on the Condé Nast Union movement, and her newsletter — which you should absolutely subscribe to.

Congratulations on bringing to life one of the most highly anticipated fashion biographies. When did the idea for ANNA come to you?

I began working on ANNA in 2018. Anna Wintour is a woman who has long fascinated me. As a leader in the business world, her longevity has been remarkable — she’s been at the helm of Vogue for nearly 34 years! (Jeff Bezos ran Amazon for 27.) People I interviewed compared her cultural innovation to that of Steve Jobs. Despite having such a public job, she has remained an enigma even to those who know her.

The average person knows her as the inspiration for Meryl Streep’s character in the Devil Wears Prada, but the film presents a superficial view of a complicated person. Anna is a powerhouse at work, but outside of it, she’s also a dog lover and a grandmother who changes diapers. This book pulls back the curtain on her life and influence in a way that has never been done before.

ANNA is based on extensive interviews with those closed to Wintour. I imagine it wasn't easy putting it together. What was the research and writing process like?

Truthfully, incredibly difficult. I thought in the beginning I might have to give up. People I called for interviews hung up on me. A turning point was when Anna, through a representative, put forward a list of close friends and colleagues for me to interview. After that, access came easier, and I was able to interview more than 250 people — including André Leon Talley, Grace Coddington, Tom Ford, Serena Williams, and Stephanie Winston Wolkoff, who planned the Met Gala for more than a decade. Their insights allowed me to paint the most complete portrait ever published of an elusive cultural icon and business leader.

As a former Vogue worker, I loved your NY Post article. While I didn't interview with Anna, I was certainly influenced by her. If you had received the offer, where would you be by now?

I would have ended up writing books, though I probably wouldn’t have written ANNA. This book aims to present Anna Wintour in an objective light, and while I had incredible access to those close to her, the book does not gloss over her missteps. For instance, her decision to publish a profile of the Syrian First Lady that received massive backlash. Anna’s staff told her publishing the story was the wrong move, but Anna moved forward because she liked the photo of Asma al-Assad. That said, her successes — and her biggest are probably Vogue and the Met Gala — are detailed throughout the book as well. I hope readers come away from ANNA feeling reflective about how she has been cast over the years as a woman in a unique position of power.

What do you think of the recent Condé Nast Union movement?

Unionizations are now part of the current media business, perhaps as routine as town cars used to be for staff of Condé Nast. As I illustrate throughout the book, Anna has had incredible perks in her job — including a sizeable annual clothing allowance, interest free mortgages to buy her homes, having up to three assistants at one time, getting professional hair and makeup done at her home before work each day. She retained this professional lifestyle even as the fortunes of legacy publishing dramatically changed. While she might not be tech-savvy enough to pick up a cell phone and easily make a TikTok, she has long been concerned about Vogue’s digital platforms. After the Met Gala, for instance, she wants to know how Vogue’s traffic is. She always wants to beat her previous record.

Tales from the Back Row was released six years ago. Have you made it to the front row yet?

Not nearly as often as Anna! With the pandemic I haven’t been doing much at outside of my home in recent years. People I spoke to for the book speculated that working entirely online — doing run-through of clothes on Zoom — must have been drudgery for Anna. She wanted her staff back in the office after Hurricane Sandy hit New York even though the subways were down and half of Manhattan was without power

My newsletter! It’s called Back Row and you can find it at amyodell.substack.com. I will be sharing more stories there about writing the book, insights about Anna, and my other reporting on the fashion industry. 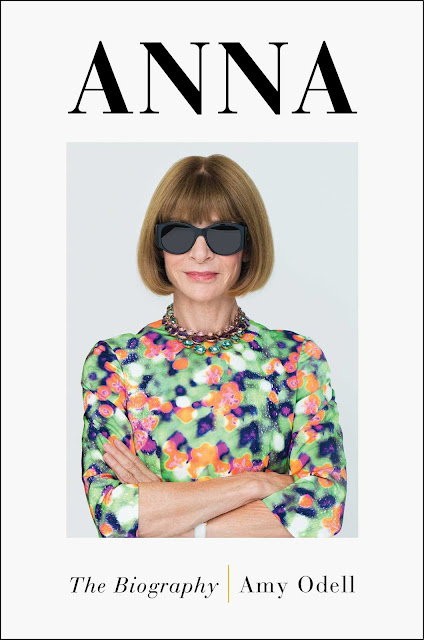 ANNA by Amy Odell is out May 3rd and is available in hardcover format from Indigo or e-book and audiobook format from Kobo.

Labels: in conversation with simonschuster
Location: Vancouver, BC, Canada