Extraordinary Ways to Grill Fruits and Vegetables, from the Master of Live-Fire Cooking

With so many cookbooks on offer these days, picking up a new one can be overwhelming. It seems that suddenly everyone and their mother is a cook. I'm not a master in the kitchen, nor will I ever claim to be. In fact, when my partner moved in with me, he was shocked when he opened my fridge to discover half a bottle of Riesling and a year-old jar of Dijon mustard. It was no surprise then that the pantry was bare, except for the post-it note on the wall with a number for the local sushi joint.
However, just because I don't venture into the kitchen often doesn't mean I don't like cooking. I actually love it. I grew up watching the Food Network, reading memoirs by Frank Bruni and Ruth Reichl, subscribing to most of the gourmet magazines, and reading about all the new restaurants in the New York Times.
You won't find many cookbooks on Avocado Diaries, and that's because I'm selective about what I include. I always say, I want to bring you the best. I'm also finding my way back into the kitchen after years of avoiding it due to a lack of confidence.
Cooking, I'm learning, is a process. 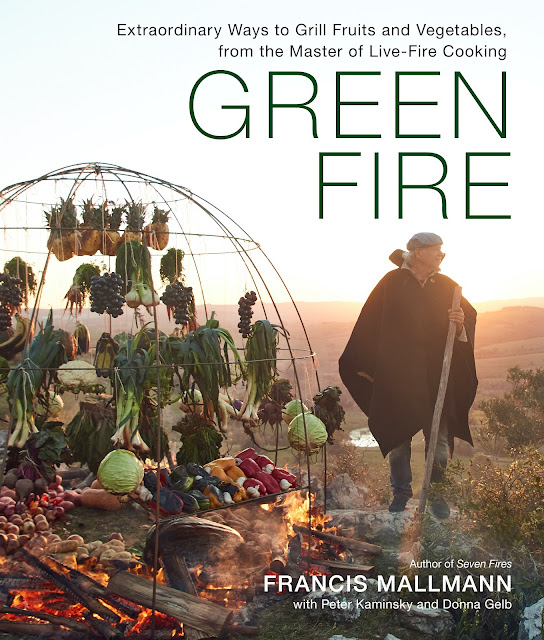 A recent cookbook to cross my path is a forthcoming offering by celebrity chef, Francis Mallmann. I first came across Mallmann's spectacular talent on an episode of the Netflix show Chef's Table, and was intrigued by his history. Jeff Gordinier of Esquire once beautifully referred to Francis as “a man whose approach to cooking and living feels like an homage to a forgotten time and place.”
Although I already had a formed opinion about the chef, his latest cookbook caught my eye. The stunning cover, captured by photographer William Hereford, drew me closer.
On the opening pages of Green Fire, Frances takes us back to his teenage years, when he lived in a small house in Bariloche. He talks with great passion about his little garden, “mine was quite simple,” he writes, “just carrots, parsley, and a few other herbs, but I protected them as if they were a treasure.”
After expressing his unconditional love for meat through the years, Mallmann is inviting us to join him in the garden again, where vegan and vegetarian recipes are the stars of his latest book.
In the first chapter, he takes us through the faces of fire, and explains in great detail why things taste better when cooked outdoors. Reading about the elements, I feel a yearning to sit by the fire — to feel the wind on my face and to breathe in the scent of the pine trees, grass, and flowers. While describing the practicalities of heat, Frances ignites a fire within me.
The book then guides us through cooking with different kinds of woods, embers, and coals. Mallmann also gives advice on the different tools for cooking, and how they impact flavour.
We then reach an array of recipes. Green Fire features more than eighty dishes that showcase Mallmann’s impressive seasonings, sauces, and finishings with Argentine influences.
He starts out with potatoes, which as an Irishman, delights me. I feel a craving for home as I read his recipe for Crispy Potato Strips and Parsley Salad with Garlic Cream.

Continuing with Green Fire, the book includes recipes for dishes featuring other vegetables like Tomatoes, Eggplants, Beans, Corn, and Beets.
If you feel comfortable with Mallmann's instructions for igniting a fire, his recipes are straightforward. They're unique, and seemingly bursting with flavour. There's also plenty that you can cook indoors.
Frances Mallmann has outdone himself with this gorgeous book. Complimenting each recipe is a beautiful display of photographs. You'll find intimate pictures of a cheerful Frances throughout—enjoying a coffee from the comfort of his bedroom, and laughing as he rows his boat.

Join me tomorrow again as I'll be sharing a recipe for the Roasted Strawberries with Ricotta and Mint from Green Fire.

Francis Mallmann is the reigning star of food television in the Spanish-speaking world, and the most famous and popular chef in South America. He is the owner of a number of restaurants, which have been named among the top 10 places to eat in the world. Mallmann was also the subject of the Netflix documentary series Chef’s Table.

Green Fire is available for pre-order (releasing May 10) in hardcover format from Indigo and in e-book format from Kobo. Check Penguin Random House Canada for additional retailers.