In conversation with Kim Kushner

Kim Kushner is a culinary educator and the author of three bestselling cookbooks: I ♥ Kosher, The New Kosher, and The Modern Menu.
Kushner was raised in Montreal, spent summers with family in Israel, and learned to cook at an early age from her Moroccan-born mother. She's a graduate of the Institute of Culinary Education in Manhattan and has developed recipes for international publications including Food & Wine and Chile Pepper. Her experience and knowledge in the kitchen further expanded when she worked as a private chef, and in 2005, she launched Kim Kushner Cuisine. Kim now travels the world teaching her wildly popular cooking classes, while also managing a busy life as a mother of four.
She's known for her flavour-packed recipes that are made with straightforward techniques, bringing ease, time-saving, and creativity approaches to the kitchen. Kushner is well known in New York City and across the globe for her healthy and hearty dishes made from locally grown produce.
She has appeared on the Today Show and has been featured in the New York Times International Edition, Huffington Post, Saveur, and the Chicago Tribune, and is recognized as a leader in redefining kosher cuisine.
Fans of the globally renowned kosher chef will be thrilled to hear that the author has a new book on the table (dare we say it), The Modern Table is hitting shelves May 10th. Kushner's forthcoming offering, publishing with Figure 1, has received favourable reviews from many, including Publishers Weekly, who stated, "Start to finish, this provides fresh ways to nurture and enhance the spirit of a kosher home." The cookbook includes recipes for mouthwatering dishes like Garlic-Confit Chicken with Lemon and Thyme, Baby Yams with Saffron Cream, and Orange Blossom Chiffon Cake with Rose Petals.
I caught up with Kim ahead of the book's release to talk about what advice she has for beginners in the kitchen (me), how she manages to stay ahead of the game while maintaining a successful business and a family, what it was like working on a cookbook during a global pandemic, and where she likes to eat in the greatest city on earth, New York.
Congratulations on your fourth cookbook! Reading your bio, I'm in awe of your culinary talent, and that you learned to cook at such a young age. I avoid the kitchen at all costs, and I'm lucky if my partner lets me near the microwave. I want to learn, but I don't know where to start. Do you have any advice for beginners?
My advice for beginners would be to pick 1 or 2 items that really interest you to cook. Then find a simple recipe or cookbook that can help guide you through it. You have to want to do it, though! My recipes are very simple. You’ll notice when you look through The Modern Table that most of the recipes require just a few ingredients and that directions are just a few lines long—very simple and straightforward!

Not only have you written four cookbooks, but you've also had four children. How do you manage a successful business and life as a mother?
It’s not easy! I don’t believe that there is a balance. I’m always giving something up. But there is enough time in a day and in a lifetime to make it all fit in, somehow. Some days are more smushed together than others. It’s about having a passion—I am passionate about my family first, but I’m lucky enough that my work involves bringing people together and feeding them—which is “motherly” in and of itself.
The Modern Table, your latest book is packed with 75 simple and delicious Kosher recipes. I'm very excited about the Rhubarb & Berry Galette you posted on Instagram. What was it like putting this book together during a pandemic? I imagine lots of virtual meetings and emails between New York and Vancouver, where your publisher, Figure 1 is based.
I have been so lucky to come together and work with this incredible team, even during a pandemic it almost seemed easy. Yes—we did zoom quite a bit, then we shot the book in person with an incredibly talented team in New York City when Covid cases were low, so it was really a blessing for us all!
I could be wrong, but I'm sure there are days when you feel like you don't want to cook. Do you have any favourite restaurants in New York?
Believe it or not, I cook at least six nights a week (for my family). But I also order in for myself probably four or five nights a week!!!!  I love sushi, and middle eastern food. My favorites are kappo masa, any of Einat Admony’s restaurants and ALENBI in Brooklyn.

Who are some chefs that inspire you and your work as an author and teacher?
Ruth Rogers and Rose Grey from the River Café in London are the women who inspired me at the very beginning. Claudia Rosen and Bonnie Stern are legendary in my eyes. I love everything Nina Parker does and restaurateur Eyal Shani simply a genius.
What's the last great book you read?
Exodus by Leon Uris. Re-reading it now!! 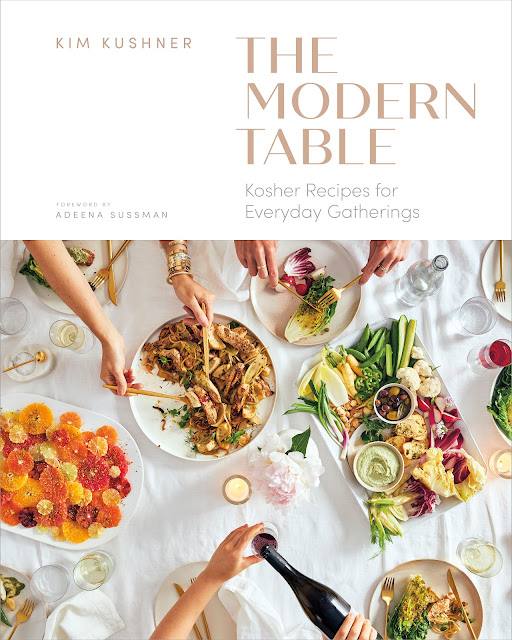 The Modern Table by Kim Kushner is available for pre-order (releasing May 10th) from Indigo.