Starbucking: The adventures of one man who plans to visit every Starbucks in the world

Winter grew up in Houston to immigrant parents and began programming computers in the fifth grade. He was selected to intern with Exxon while still in high school and went on to graduate from the University of Texas with a degree in Computer Science.
His expectations of living as a well-off programmer and dreams of owning his own company didn’t plan out how he expected them to, and he ended up becoming a Starbucks devotee, later setting his heart on visiting every Starbucks in the world.
His lifestyle has since evolved to accommodate that goal, and Winter has visited more than 16,700 Starbucks since. He’s in the process of writing a book about Starbucking, and is currently looking for a literary agent or publisher.
A huge Starbucks fan myself, I came across Winter's book proposal on Publisher's Marketplace and felt inclined to interview him about his quest. I don't know about you, but I already want to pre-order the book.
The first Starbucks I ever visited was located at 39th Street and 8th Avenue in New York City. I was doing an internship at New York Fashion Week at the time, and must have visited the store up to ten times a day. The smell of coffee beans at that Starbucks still feels so nostalgic to me, but unfortunately it’s closed now. Did you ever visit that location?
Yes, 39th & 8th was one of the earliest NYC Starbucks I visited, way back on July 4, 2000. I see that it closed recently, during the pandemic, like dozens of NYC stores, and I imagine that your memories of that cafe are more recent than my visit. Here is my original photo of the store:
I feel a pang of sadness each time a Starbucks closes. The most recent closer was the gorgeous Starbucks Reserve on Vancouver’s Main Street. Having visited more than 16,000 locations, which Starbucks do you feel most attached to?
I can relate to how you feel about Starbucks closures. I used to feel the same way myself, and if it was a store that I had never managed to see, I felt an emptiness in the pit of my stomach. I feel that less now that my life is more balanced and my coffee preferences have shifted away from Starbucks to craft coffees. Still, there are two Starbucks, both closed, that I still feel sad about, because of the memories. Both are in Plano, TX, both at the intersection of Park & Preston.
The one next to the Barnes & Noble became my original “third place” Starbucks where I hung out most nights for years, made dozens of friends, and even worked for a month. The other, in the Preston Park Village shopping centre, was a short walk across a parking lot from my apartment, and that was where I conceived of the idea to visit every Starbucks. I am still sad that they both closed, because they are so personal to me.

I have a growing collection of Starbucks city mugs from my travels around the world. Do you feel compelled to collect merchandise from each store you visit?
I used to collect Starbucks t-shirts actively, often receiving them from managers after I explained my Starbucking project, and occasionally buying some on eBay, and I also collected mugs and other items, like tumblers, aprons, Bearistas that were gifted to me during my travels or by friends. I had limited room in a small closet in my parents' house, however, so I stopped collecting everything but Starbucks cards, which are quite small.

What’s are the most unique food and beverage items you’ve tried at Starbucks?
Believe it or not, I have no memories of ever trying any of the exotic Starbucks food offerings found in Asian Starbucks, and the reason is simply that I'm a bit of a foodie, and when overseas I am often seeking out foods from local restaurants, often hole-in-the-walls or street food. In fact, other than Starbucks or trying out notable local chains, I tend to eschew chain restaurants. The one exception are breakfast breads and pastries not found in North America, and in some Latin American Starbucks they have pan de queso. Not unusual by Latin American standards, of course, but not something found at Starbucks up here.

Living so close to Seattle, I’ve felt an urge to visit many times just for a trip to the Pike Street Reserve location. How many times have you been there?
Not quite sure which store you are referring to, because there are a number of noteworthy stores in Seattle. Most people ask me about the Pike Place store, at 1912 Pike Place, which is billed by Starbucks as their original location, although it is not actually. If that's the one you mean, I've been inside two or three times, and I've been outside a few more to take better photos, which is challenging because the store faces west, but in the evening the market is almost always crowded.
If you mean 1st & Pike, which opened in March 2009 and might have been a Reserve store, then I've only been once.
Alternatively, you might be referring to the Pike Street Roastery, at 1124 Pike Street—the sign on the door might actually read “Reserve Store and Roastery” or something like that. I've been to that store two or three times because the Roasteries are some of the coolest Starbucks in existence, always something exciting to see.

You’re currently looking for a publisher for a manuscript that’s almost completed. If you could sell your book to me in a sentence, what would you say?
Starbucking' tells the amazing tale of how one person's quest to achieve the impossible task of visiting every Starbucks in the world led him to find the self-actualization that comes from a purpose-driven life.
I’m currently drinking a Venti Earl Grey tea with SF vanilla syrup and a splash of milk. No one makes it like Starbucks. The only thing missing is a copy of your book, which I wish I had, after reading your proposal. What’s your current drink of choice?
Ironically, my drink of choice is regular filter coffee from almost any craft coffeehouse or roaster, but NOT Starbucks. In fact, as I answer your questions, I am drinking a Pike Place roast from a new Starbucks in Virginia Beach, and it is truly awful—burned and bitter, not roasted or brewed to the standards that Starbucks had in the 90s.
Veering away from Starbucks now, tell me three of your favourite craft coffee shops.
Coava Coffee in Portland, is still my all-time favourite. Their roasting profile and bean selection agrees with me, and I enjoy coffee brewed with the Chemex method, which is all that they use for their filter coffee. While I have had individual cups from other roasters that I considered better, I return to Coava every time I'm in Portland, typically have a few cups over a couple of days, and I'm never disappointed.
Sight Glass Coffee in San Francisco is consistently good and served me up my single best cup, which I gave a 9.0 (out of 10) to--it was a natural-processed Kenyan peaberry called Kiawamururu.
The #3 slot could go to a number of roasters, but I will choose KLVN Coffee Lab out of Pittsburgh simply because I keep thinking about that coffee and long to have some more. I've only had one cup, sometime in 2020 during the pandemic, and sadly I've not been able to return through Pittsburgh during their business hours since. 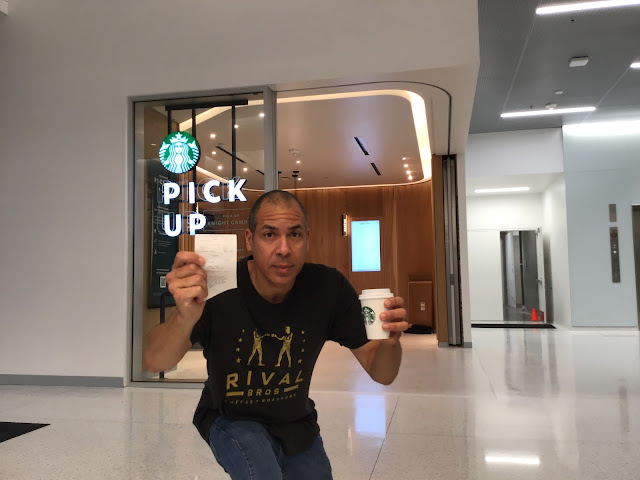 Want to learn more about Winter, his Starbucking adventures, and his book? Check out his website which includes links to his social media profile and contact information.

Labels: in conversation with nonfiction
Location: Vancouver, BC, Canada