Joan Is Okay by Weike Wang

“The medical system wasn’t perfect, but I still admired it for being a hierarchical masterpiece of specialized skill. Moreover, how could a system be that flawed if it had allowed someone like me in?”

Joan is a thirtysomething ICU doctor at a busy New York City hospital. The daughter of Chinese parents who came to the United States to secure the American dream for their children, Joan is intensely devoted to her work, happily solitary, successful. She does look up sometimes and wonder where her true roots lie: at the hospital, where her white coat makes her feel needed, or with her family, who try to shape her life by their own cultural and social expectations.

Once Joan and her brother, Fang, were established in their careers, her parents moved back to China, hoping to spend the rest of their lives in their homeland. But when Joan’s father suddenly dies and her mother returns to America to reconnect with her children, a series of events sends Joan spiralling out of her comfort zone just as her hospital, her city, and the world are forced to reckon with a health crisis more devastating than anyone could have imagined. 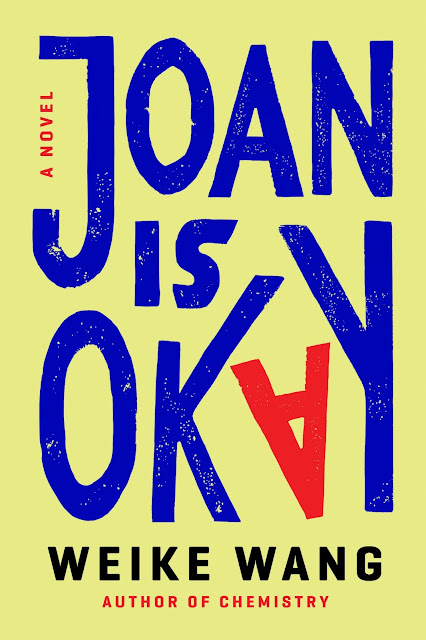 I was hoping for dry wit and sharp humour, and Weike Wang delivers it exceptionally in this brilliant novel. For lovers of Wang's debut novel, Chemistry, and Rachel Khong's Goodbye, Vitamin, this book perfect is for you.

On the opening pages, readers are introduced to the protagonist, a thirty-six-year-old Asian American woman named Joan, with the story being told entirely from her perspective, and shifting seamlessly between old memories of her growing up in America with immigrant parents and her present days spent working as an ICU attending physician at a hospital in Manhattan.

Joan is an honest, highly intelligent, and practical character. She's a Harvard graduate, single, and married to her job at the West Side Hospital, a role that she believes defines her. She's the polar opposite to her Yale educated brother, Fang, a hedge fund manager who lives a lavish life in Greenwich. Fang is quite the character too, and is constantly trying to persuade Joan to leave the city and start her own private practice in the suburbs.

I got a thrill out of Joan's interactions with others, including her coworkers Madeline and Reese, her inappropriate but hilarious doorman, and her next door neighbour Mark, who develops well as the book progresses.

The way in which Weike writes is unique, her signature prose is deadpan and amusing from start to finish. It's the exact kind of humour I enjoy, with so many great witty remarks throughout that had me laughing out loud. There are some serious topics within, such as when Joan is grieving the death of her father, and when COVID-19 pandemic hits, but it doesn't take away from the lightness of this book.

The Coronavirus tie-in was smart of Wang, who has a doctorate in public health, so she pulled this off exceptionally well and relayed an accurate account of events as they unfolded around the world. I think all readers will be able to relate to that part of the book.

Joan is Okay was fantastic. I was sad to reach the end because I hoped to hear more from some of the characters that I'd grown fond of. Overall though, it was well written, there was some excellent character development, and it was highly enjoyable. Well worth the read!

Weike Wang is a graduate of Harvard University, where she earned her undergraduate degree in chemistry and her doctorate in public health. She received her MFA from Boston University. Her fiction has been published in literary magazines, including Alaska Quarterly Review, Glimmer Train, and Ploughshares, which also named her debut novel, Chemistry, the winner of its John C. Zacharis Award. A “5 Under 35” honouree of the National Book Foundation, Weike currently lives in New York City.

Joan is Okay is available for pre-order (releasing January 18th) in hardcover format from Indigo and in e-book or audiobook format from Kobo. Check Penguin Random House Canada for additional retailers.

Thank you to Penguin Random House Canada for my copy in exchange for this honest review.