“Sometimes I ask myself why I stay. But I have known money long enough to realize that it always comes with strings attached. And I have known the world long enough to know that at its core, it’s a game. Either you play or you are the one being played with.”

Lyla has always believed that life is a game she is destined to win, but her husband, Graham, takes the game to dangerous levels. The wealthy couple invites self-made success stories to live in their guesthouse and then conspires to ruin their lives. After all, there is nothing worse than a bootstrapper.

Demi has always felt like the odds were stacked against her. At the end of her rope, she seizes a risky opportunity to take over another person’s life and unwittingly becomes the subject of the upstairs couple’s wicked entertainment. But Demi has been struggling forever, and she’s not about to go down without a fight.

In a twist that neither woman sees coming, the game quickly devolves into chaos and rockets toward an explosive conclusion.

Because every good rich person knows: in money and in life, it's winner take all. Even if you have to leave a few bodies behind. 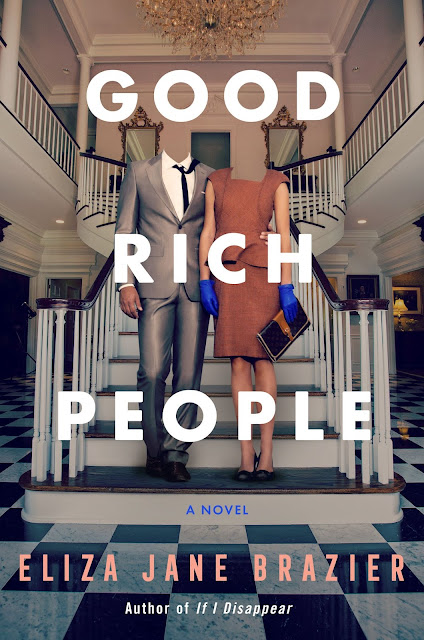 Oh my god, what a ride! I knew I would like Good Rich People as soon as I read the synopsis. It sounded dark, twisty, and absolutely gut-wrenching, and the early reviews were promising.

Eliza has crafted an impressive and unique storyline paired with a compelling cast of characters that made this an addictive read. I really wanted to savour this one, but ended up devouring the entire book in just a few hours, unable to put it down.

The first character we meet is Lyla Herschel, with the beginning of the story being told from her perspective. She's an interesting character, and through Brazier's prose, I really started to build a picture of her in my mind. She lives in a state-of-the-art home on the edge of a cliff in Los Angeles, which she shares with her attractive husband Graham and vicious mother-in-law Margo. On the surface, Lyla seems like the typical Beverly Hills housewife, filling her time and her wrinkles with plastic surgery and lavish Moët lunches with the ladies, but underneath it all, she's quite a complex and layered character.

The reader is then introduced to mother and son duo, Graham and Margo Herschel, two characters with too much time, too much money, and not enough excitement in their life. To combat their boredom, they rent out the guesthouse on the property and take turns playing twisted psychological games with the tenants who live there, conspiring to ruin their lives.

“The game is simple, in theory, but in practice it always gets messy. The tenant is the pawn. The landlord is the player. The family is the audience. We observe from a distance, talk it over at private dinners.”

When a new tenant called Demi moves in, Graham and Margo decide it's about time Lyla steps up to the plate to play. As much as she doesn't want to, she's desperate to prove her worth to her husband and mother-in-law.

Once Demi is introduced, the suspense really starts building. She has an intriguing backstory that adds layering and depth to the plot. After her arrival, the story is told from both Lyla and Demi's points of view, so the reader gets a real sense of what's going on under the surface for each of them. The alternating points of view are seamlessly written, and there's much more to Demi than meets the eye.

So, will the new tenant be enough to satiate the Herschel family? Or is she smarter than they think? What's that saying, two can play that game?

Brazier held my attention from start to finish with this book. I became so completely absorbed by the characters and the constant unexpected plot twists. Eliza also manages to capture so accurately the complete ridiculousness of the ultra wealthy, to the point that it's hilarious at times. Good Rich People is intoxicating, well written, and highly engaging.

Eliza Jane Brazier does suspenseful thriller so well. As soon as I finished this one, I went searching for her debut, If I Disappear.

Eliza Jane Brazier is an author, screenwriter, and journalist. She currently lives in California, where she is developing her books for television.

Thank you to Berkeley Publishing Group for my advanced reader's copy in exchange for this honest review.