The Next Supper by Corey Mintz

The End of Restaurants as We Knew Them, and What Comes After

“It’s Monday, March 16, 2020, the day the restaurants died. Like most people, I’ve just spent the weekend watching the world come to a sudden halt.”

A searing expose of the restaurant industry, and a path to a better, safer, happier meal.
In 2019, the restaurant business was booming. Americans spent more than half of their annual food budgets dining out. In a generation, chefs had gone from behind-the-scenes labourers to TV stars. The arrival of Seamless, DoorDash, and other meal delivery apps was overtaking home cooking.
Beneath all that growth lurked serious problems. Many of the best restaurants in the world employed unpaid cooks. Meal delivery apps were putting many restaurants out of business. And all that dining out meant dramatically less healthy diets. The industry may have been booming, but it also desperately needed to change. And, then, along came COVID-19. 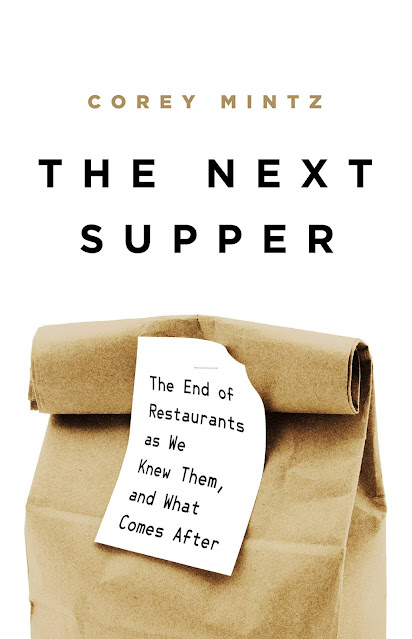 And along with COVID-19, came a long line of Toyota Prius’ lined up along my street in Vancouver. Out of each one, stepped a man or woman carrying a little brown bag with a receipt taped to it, quite like the one on the cover of Corey Mintz’ new book The Last Supper. From the street, they walked toward rows of apartment buildings, where they would buzz and say something along the lines of, “hello, this is Uber/DoorDash/SkipTheDishes, and I have your order!”
I will be the first to admit that these apps came to my rescue at the beginning of the pandemic. There was a time when I was using them up to three times a day. I would even order my morning Starbucks from them. I’d check my phone eagerly as they approached my building, slip my mask on, and head to meet the driver at the front door. At times, he or she would be there, but sometimes it was as though a ghost had delivered my goods, leaving them unguarded on the doorstep. How bizarre, I’d think. How 2020.
Lately, I started to feel something amiss with these apps. Mostly, the social connection that I felt when I used to actually go to a restaurant. I miss being able to have a chat, even if it was just asking for condiments or a knife and fork. With an already 6ft distance between me and my friends, I can’t help but feel these apps are just driving us even further apart from one another.
I’ve also noticed myself growing more irritated with apps like Uber Eats and DoorDash, with their unrealistic times of arrival or the foods arriving in a state of disarray from being squashed in the backseat of someone’s filthy car. They tell me I’m a VIP customer at Uber because I spent so much money during the pandemic last year. I said it with pride at first, as if it really meant something. Now, I’m just happy it connects me with a human in 5 minutes or less so that I can complain when they screw up for the 3rd time in a week.
It’s just not the same. I find myself repeating internally, again and again.
With Mintz's book, I was hungry to find out more about the apps driving not only our food, but also our restaurants, I wanted to satiate a craving for knowledge that I had, and hoped it wouldn’t leave me with a bitter taste in my mouth.
I realized very early on that I was going to be in for quite a shocking adventure. I think during the beginning of the pandemic, when I was using third party delivery apps a lot more often, that I saw a side of the restaurant industry that I wanted to see, and not the side that actually existed. I convinced myself everything was fine, that restaurants were thriving with takeout orders, business was booming. I didn’t stop to consider that they were at half to no capacity, with their dining rooms as empty as my fridge. I didn’t think of the tip-less servers, or the restaurant owners, and how COVID-19 had thrown them directly into their own broilers to burn.
I just put on my rose-tinted glasses, pulled out my phone and said, “I’m supporting local businesses with my Uber Eats order!”
“We learn as we go, about many things” Mintz writes in the book.

I learned right away from the book that most third party delivery apps such as Grubhub, Uber Eats, Foodora, and others, take a thirty percent commission from small businesses that operate at 4 to 12 percent profit margins. A statistic that shocked me. While some Silicon Valley tech executives swam in million-dollar bills, small business owners were struggling to pay their employees and stay afloat, with many being forced to close.
When talking about the ‘tech companies’, in Corey’s opinion “they are a predatory enterprise that has figured out how to use technology to get between restaurants and their customers and then sell them back for a cut of the action.”
Right away, The Last Supper made me think twice about ever using a third party food delivery app again. I live in Vancouver’s city centre, surrounded by restaurants offering an array of takeout options.
Corey continues, “A decade of obsession over the superficial trappings surrounding what we eat has left so many of us more hungry, angry, and cheated than ever. It’s a hole dug deeper by the unfair burden placed on the service industry during the COVID-19 pandemic.”
I did feel an anger welling within me at certain points of the book, as though I had been cheated by these delivery apps. But like Corey says, we learn as we go.
When referring to the long term effects on our economy, Corey says, "If I had to guess, I’d say that many of the restaurateurs who have pivoted to leaner takeout operations will continue that way, at least for a couple of years, and that when pockets are flush again, we’ll see the pendulum swing back to a lot of the excess we saw before. It won’t look the same; while the Great Recession was a disruption, this is an extinction-level event."
I learned a lot from a chapter called The Instagram Meal, finding it shocking to think that when people open restaurants now that at least some part of the menu or dining room is conceived just for photography. It just completely amazes me to think that, but I totally understand it. It’s impossible to go to a restaurant now, especially a new one, without seeing photoshoots happening all around you. We’re living in the age of #foodporn.
There’s another chapter, The Fast-Food Restaurant, a.k.a. The QSR, and while I do enjoy these kinds of places (Starbucks, Chipotle, and some others), it really saddened me to think about the state of the industry. When talking about supply chain for quick service restaurants, one line in particular stung me like a bee:
“Would you buy a tomato,” Asbed asks me as I eat my burger, “if you knew it was picked by slaves?”
Corey goes on to say that most of us would not, if we were given the choice. "There’s no fast-food restaurant with a clean supply chain," he states. Unless we pay more, or go to a farmer’s market for our food, then we’re likely eating produce picked by people in slavery-like conditions. And even then it’s still not guaranteed.
It was fascinating to read about In-N-Out in this chapter, a restaurant I respect for its family values. When referring to the rise of third party delivery apps, Corey says "In-N-Out resisted the temptation to have someone else serve their food to customers. In 2015, when DoorDash started listing In-N-Out for delivery, without permission, In-N-Out sued."
It’s clear from The Next Supper that Corey Mintz has an incredible wealth of restaurant industry knowledge.
I gained insight and knowledge into a topic that I had no idea about before, taking something from each chapter.
Corey leaves us with a bold statement and a question, "What is happening right now is a tragedy. A bigger tragedy would be to learn nothing from it, while blindly reproducing the same, broken, cruel system. In the wake of COVID-19’s dismantling of the restaurant industry, it’s time to ask, how can we build a better dining culture and supply chain rather than replicating the inequities of the previous one?"
Corey Mintz is a freelance food reporter (New York Times, Globe and Mail, Eater and others), focusing on the intersection between food with labor, politics, farming, ethics and culture. He has been a cook, a restaurant critic and is the author of How to Host a Dinner Party, which chronicled 192 dinner parties he hosted with fascinating people including politicians, refugees, criminals, artists, academics, acupuncturists, hi-rise window washers, competitive barbecuers and one monkey.

The Next Supper is available in hardcover at Indigo and in e-book format on Kobo. Check GoodReads for additional retailers.