“We’re both pretty good at keeping up appearances and I find people see what they want to see. But behind closed doors, things have been wrong with Mr. and Mrs. Wright for a long time.”

When Adam and Amelia win a weekend away to Scotland, it might be just what their marriage needs. Self-confessed workaholic and screenwriter Adam Wright has lived with face blindness his whole life. He can’t recognize friends or family, or even his own wife.

Every anniversary the couple exchange traditional gifts--paper, cotton, pottery, tin--and each year Adam’s wife writes him a letter that she never lets him read. Until now. They both know this weekend will make or break their marriage, but they didn’t randomly win this trip. One of them is lying, and someone doesn’t want them to live happily ever after. 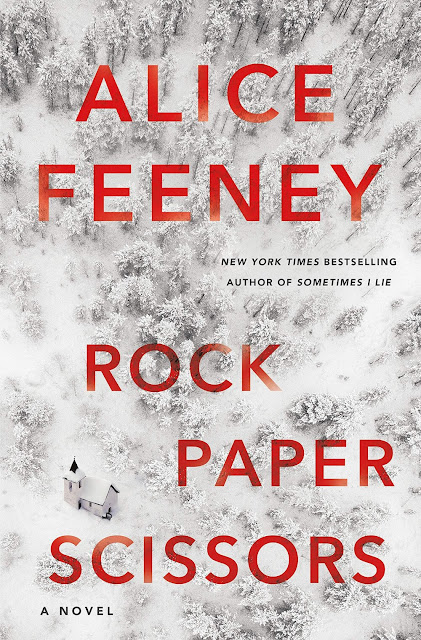 What's the last book that kept you up all night?

Rock Paper Scissors was a fabulous domestic thriller that was impossible to put down once I started. It was my first Alice Feeney novel, and it most certainly won't be my last. I discovered a new favourite author while reading this one.

The novel follows Amelia and Adam Wright from their home in London to Blackwater Loch in the Scottish Highlands, where they’ve won a weekend stay at an old converted chapel in the middle of nowhere. Supposedly the weekend that will make or break their marriage, and it turns out they’re not the only two on the property.

The book is filled with thrilling plot twists and turns that will keep you on your toes guessing throughout.

Alice expertly sets the scenes in this book, each one carefully constructed and put into play for a reason. Her writing is addictive, and once I started there was no turning back.

The alternating perspectives from Adam and Amelia throughout really added depth and layering to the story. Seeing how they really feel about each other gives the reader more insight into their dysfunctional relationship.

The chapters are short and engaging, and each one ends on a chilling line that will leave readers hungry for more. I barely even stopped to take notes while reading, I was so completely engrossed in it and wrapped up in the lives of the Wright family.

Rock Paper Scissors kept me engaged from cover to cover. When I would think I had it all figured out, another plot twist would occur and take me by surprise.

Feeney's imagination and writing skills are one of a kind, and I can't wait to read more of her work and to see this book adapted for TV.

By the time I reached the end my hairs were standing at attention and I had chills all over. I can't recommend this book enough.

Alice Feeney is a New York Times bestselling author and journalist. Rock Paper Scissors is her fourth novel and is being made into a TV series for Netflix by the producer of The Crown. Alice was a BBC Journalist for fifteen years before becoming an author. She lives in Devon with her family.

Rock Paper Scissors is available in paperback or hardcover at Indigo and in e-book or audiobook format from Kobo. Check GoodReads for additional retailers.