“We sit near the lake and stare out at the water. Clouds move slowly across a pink sky. Sometimes, I wish the sun would never set, so we can stay here, enjoying each other's company, talking like we always do, laughing at inside jokes, pretending like nothing could ever go wrong.”

Seventeen-year-old Julie has her future all planned out—move out of her small town with her boyfriend Sam, attend college in the city, spend a summer in Japan. But then Sam dies. And everything changes.
Heartbroken, Julie skips his funeral, throws out his things, and tries everything to forget him and the tragic way he died. But a message Sam left behind in her yearbook forces back memories. Desperate to hear his voice one more time, Julie calls Sam’s cellphone just to listen to his voicemail.
And Sam picks up the phone.
In a miraculous turn of events, Julie’s been given a second chance at goodbye. The connection is temporary. But hearing Sam’s voice makes her fall for him all over again, and with each call it becomes harder to let him go. However, keeping her otherworldly calls with Sam a secret isn’t easy, especially when Julie witnesses the suffering Sam’s family is going through. Unable to stand by the sidelines and watch their shared loved ones in pain, Julie is torn between spilling the truth about her calls with Sam and risking their connection and losing him forever. 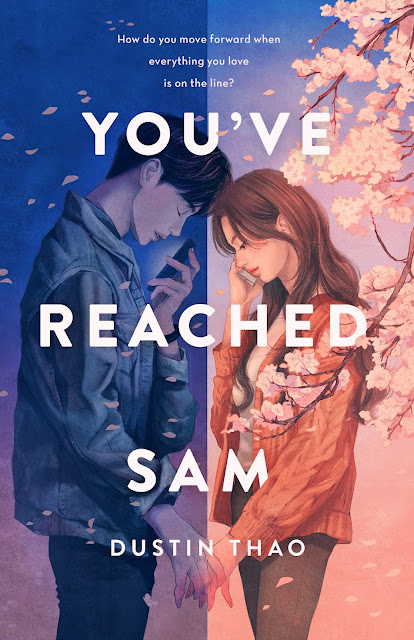 What I thought
Major tearjerker alert! This book should come with an box of Kleenex.
I had been excited to read You've Reached Sam ever since seeing the gorgeous cover and reading the blurb, and am so grateful to Wednesday Books and Raincoast for the advanced reader’s copy. I knew this wouldn’t be an easy read, with the strong themes of grieving, love, and loss throughout.
You've Reached Sam explores in depth the loss of a loved one, something I think many of us can relate to, but never want to have to experience first hand. I actually had to put off reading this one for a while, not sure where it would take me, my own fear of shedding tears and being reminded of those I've lost held me back from picking it up, but I'm so glad I eventually did.
The book opens on a series of dreams from Julie's perspective as she looks back on precious moments shared with Sam, the first of which is when we meet her and Sam, the two of them students who spark a romance over a long conversation at Sam’s coffee shop. She remembers the time he left her his number at her bookshop in a hand folded cherry blossom and moments together at their special spot by the lake.
Julie then cycles through the various stages of grief in an accurate portrayal, including denial, avoidance, regret, blame, isolation, and then throwing out every reminder of Sam. What's deeply saddening is that no matter how much she gets rid of, she's still surrounded by him, by the constant memory triggers that bring back moments they've shared together. They had all of these plans for the future, and reminders of them are everywhere, which makes this all the more heartbreaking.
The first time Julie calls Sam after losing him, and he miraculously picks up, I had goosebumps. I thought of those I've lost, the times I've called just to hear their voicemail, and thought to myself, what if they picked up one last time? What if I had a second chance to say goodbye?
Julie gets this opportunity through heartfelt phone calls with Sam after his passing, and it's so painfully tragic to feel her fall for him all over again, knowing that their reconnection will be short-lived. At the same time, these calls help Julie to process her grief and begin to move on.
Although the story is told from Julie's perspective throughout, the reader also experiences the grief from Sam's best friend Oliver, his cousin Mika, and brother James, with each character coping with the loss in their own way.
This is a beautiful debut from author Dustin Theo. The writing is so beautiful that the characters almost felt real, and the emotions experienced whilst reading were most definitely real. I felt my heart fluttering in my chest throughout, tears welling in the corners of my eyes with each turn of the page. The stunning way that Theo writes about Julie and Sam's romance is palpable.
You've Reached Sam had me captivated from the very first page and held my attention right until the end. I read the entire book in one sitting.
This is a breathtaking story that did not disappoint.
Dustin Thao is a Vietnamese American writer based in Chicago. He graduated from Amherst College with a B.A. in Political Science, and is currently in a PhD program at Northwestern University. He writes contemporary fiction, and You’ve Reached Sam, published by Wednesday Books, is his debut novel.

You've Reached Sam is available for pre-order (releasing tomorrow) in hardcover format from Indigo and in e-book format from Kobo. Check GoodReads for additional retailers.

Thank you to Raincoast Books and St. Martin's Press for the advanced reader's copy of this book in exchange for an honest review.