We Were Never Here by Andrea Bartz

“I was alone. The space around me was like something solid, chilled air and night sounds and the cosmos pushing in on me, vibrating on my lips, my scalp, my eardrums. I felt a sudden instinct to pierce it all with a wild scream.”

WE WERE NEVER HERE

Emily is having the time of her life—she’s in the mountains of Chile with her best friend, Kristen, on their annual reunion trip, and the women are feeling closer than ever. But on the last night of the trip, Emily enters their hotel suite to find blood and broken glass on the floor. Kristen says the cute backpacker she brought back to their room attacked her, and she had no choice but to kill him in self-defense. Even more shocking: The scene is horrifyingly similar to last year’s trip, when another backpacker wound up dead. Emily can’t believe it’s happened again—can lightning really strike twice?
Back home in Wisconsin, Emily struggles to bury her trauma, diving headfirst into a new relationship and throwing herself into work. But when Kristen shows up for a surprise visit, Emily is forced to confront their violent past. The more Kristen tries to keep Emily close, the more Emily questions her motives. As Emily feels the walls closing in on their cover-ups, she must reckon with the truth about her closest friend. Can Emily outrun the secrets she shares with Kristen, or will they destroy her relationship, her freedom—even her life? 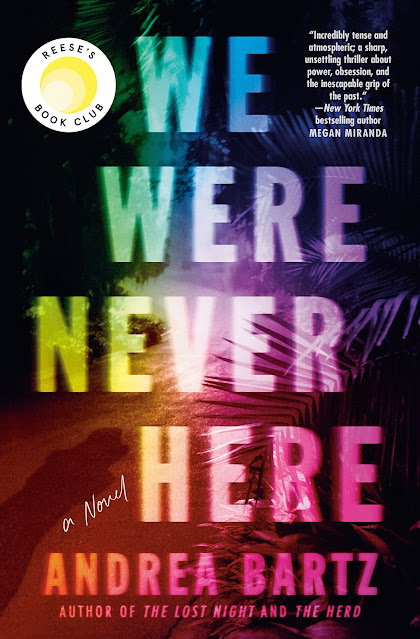 What I thought
We Were Never Here is a Reese Witherspoon Book Club pick, and I always trust Reese when it comes to books, having enjoyed several of her other choices. I've also seen this book popping up all over social media lately, so I was thrilled to finally pick up a copy of my own.
Andrea Bartz sets the mood right away with this chilling and richly atmospheric novel. Once I started, there was no looking back. Bartz’s prose is intoxicating, and had the power to draw me in right away and hold me captive, commanding my attention, from beginning to end.
On the opening pages, readers meet protagonists Emily and Kristen, two best friends nearing thirty who are travelling around Chile together. They’ve been each other’s ride or die for more than a decade.
The story is told from Emily’s point of view throughout, and right from the beginning I was curious about her background and the fresh trauma she was dealing with. It was clear that whatever happened on their previous trip together, happened to them both, forging an unbreakable bond between them.
There are subtle thrills cleverly distributed throughout the book, and a climax pending that will keep readers turning the pages right until the end.
Bartz is a master at crafting intriguing characters and storylines with surprising plot twists and turns. We Were Never Here is an excellent slow burn psychological thriller, with the suspense heating up on the opening pages and simmering at a steady pace throughout.
As the story progresses, and Kristen’s character becomes more developed, the pace starts to pick up and readers will find themselves questioning her motives.
Overall, this was unputdownable. Thriller and suspense isn’t my go-to genre, but I’ve been reading more of it lately, and found this one to be a brilliant and engaging work of fiction that kept me up well into the night.
Andrea Bartz is a Brooklyn-based journalist and New York Times bestselling author of We Were Never Here, The Lost Night, and The Herd. Her work has appeared in The Wall Street Journal, Marie Claire, Vogue, Cosmopolitan, Women’s Health, Martha Stewart Living, Redbook, Elle, and many other outlets, and she’s held editorial positions at Glamour, Psychology Today, and Self, among other publications.

We Were Never Here is available for purchase in hardcover format from Indigo or in e-book or audiobook format from Kobo. Check Penguin Random House Canada for additional retailers.