The Atmospherians by Alex McElroy

“We'll call it The Atmosphere," he said "The men will be Atmospherians. It's a film term. Another word for extras: people who provide the atmosphere and stand in the background. What better aspiration for men? To cede power, the spotlight, to let others speak, let the action continue without them.”

Sasha Marcus was once the epitome of contemporary success: an internet sensation, social media darling, and a creator of a high profile wellness brand for women. But a confrontation with an abusive troll has taken a horrifying turn, and now she’s at rock bottom: canceled and doxxed online, fired from her waitress job and fortressed in her apartment while men’s rights protestors rage outside. All that once glittered now condemns.
Sasha confides in her oldest childhood friend, Dyson—a failed actor with a history of body issues—who hatches a plan for Sasha to restore her reputation by becoming the face of his new business venture, The Atmosphere: a rehabilitation community for men. Based in an abandoned summer camp and billed as a workshop for job training, it is actually a rigorous program designed to rid men of their toxic masculinity and heal them physically, emotionally, and socially. Sasha has little choice but to accept. But what horrors await her as the resident female leader of a crew of washed up, desperate men? And what exactly does Dyson want? 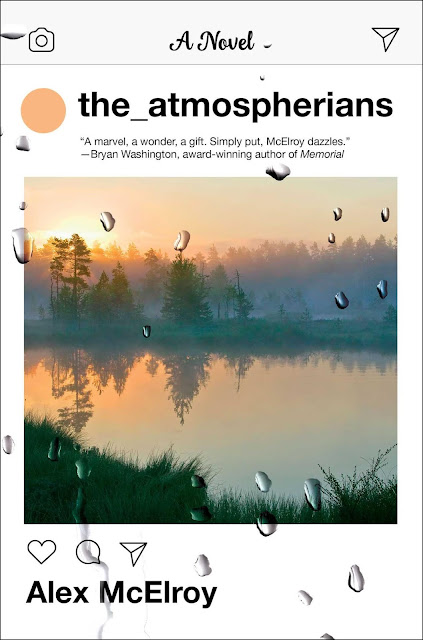 What I thought
I felt drawn to read this book after reading an article that the author, Alex McElroy, wrote for The Atlantic about de-romanticizing eating disorders when writing about them.
The Atmospherians drew me in right away. It wasn't even the first paragraph, or the first chapter, but the first line that hooked me and left me wanting more. The entire book flowed like this, seamlessly through different time periods, from one vivid scene to the next.
The book revolves around two main characters: Sasha, a disgraced wellness influencer who has fallen from her throne after one of her followers blamed her for his future live-streamed suicide, and her best friend Dyson, a struggling actor with severe body image issues.
It starts out with Sasha being harassed and Dyson showing up at her door with the offer to start a cult with him. Out of sheer desperation, after losing her wellness brand, her job, and her boyfriend, she agrees to start The Atmosphere, a cult to radically transform toxic men.
McElroy sets the scene for The Atmosphere early on, its fifteen acres of complete isolation spread across the northern rim of the Pine Barrens, “its rugged ugliness, the gaudy sheds, the paint-chipped barn, the grass thirsty for water, the generator, sparrows looping through the sky.”
Sasha and Dyson are both intriguing characters in their own ways, and there’s some great character development with both as the story progresses. Especially with Dyson, I found the link between his toxic father, disordered eating, and his self-sacrificing ways deeply thought-provoking.
Part two of the book dives much deeper into Dyson’s eating disorder, offering an accurate account, and may be triggering to some.
I found myself constantly wanting to jump ahead to see what was next for Sasha, Dyson, and the Atmosphere. The unique storyline and evolving plot demanded my attention and kept me engaged from start to finish. It felt like a rollercoaster ride I couldn't, and didn't want to, get off.
The Atmospherians as a whole is an exploration of toxic masculinity, body image, social influence, and cravings for fame and power. It's filled with dark humour and wit, and was so completely addictive.
All in all, this was a terrific read. I just kept thinking all the way through how well-written it was. I’m definitely looking forward to reading more from McElroy in the future.
Alex McElroy (they/them) is a nonbinary writer based in Brooklyn. Their writing has appeared in The Cut, Harper’s Bazaar, The Atlantic, Tin House, BuzzFeed, Esquire, and elsewhere. They have received fellowships from the Bread Loaf Writers’ Conference, the Tin House Summer Workshop, the Sewanee Writers’ Conference, and the Elizabeth George Foundation. The Atmospherians is their first novel.

The Atmospherians is available for purchase in hardcover format from Indigo and in e-book or audiobook format from Kobo. Check Simon & Schuster for additional retailers.

I purchased my copy from Kobo.