Gerald, a mid-level employee of a New York–based PR firm has been uploaded into the company’s internal Slack channels—at least his consciousness has. His colleagues assume it’s an elaborate gag to exploit the new work-from home policy, but now that Gerald’s productivity is through the roof, his bosses are only too happy to let him work from... wherever he says he is.

Faced with the looming abyss of a disembodied life online, Gerald enlists his co-worker Pradeep to help him escape, and to find out what happened to his body. But the longer Gerald stays in the void, the more alluring and absurd his reality becomes.

Meanwhile, Gerald’s colleagues have PR catastrophes of their own to handle in the real world. Their biggest client, a high-end dog food company, is in the midst of recalling a bad batch of food that’s allegedly poisoning Pomeranians nationwide. And their CEO suspects someone is sabotaging his office furniture.

And if Gerald gets to work from home all the time, why can’t everyone? Is true love possible between two people, when one is just a line of text in an app? And what in the hell does the :dusty-stick: emoji mean? 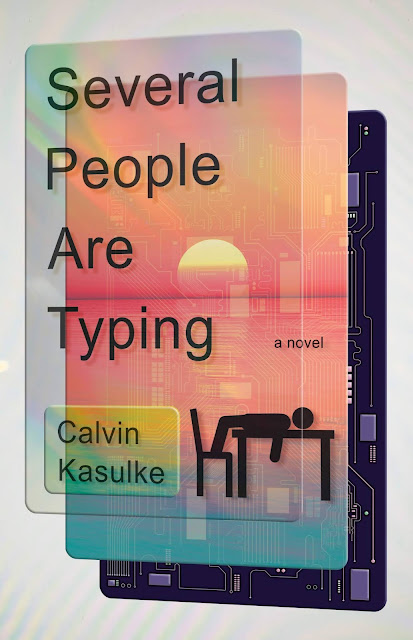 Whether we like it or not, the pandemic has forced many of us away from our offices and into our homes. I have a few friends who have just started new jobs and only know their colleagues by their Slack profile pictures. I'm sure some of my readers can relate. COVID-19 has pushed us into a new age of virtual happy hours, Zoom meetings, shared Google Docs, and productivity applications.

I was delighted to read this debut novel by Calvin Kasulke, knowing it would be relatable, and finding it as hilarious as it was absurd. Several People Are Typing was absolutely brilliant, and probably one of the most unique books I've ever read. The prose is most definitely a sign of the times we find ourselves living, and a completely accurate portrayal of what it's like to work online.

The entire novel is written in Slack formatted messages and emojis, and clocks in at just over two hundred pages which made it a light, quick and easy read. Once I started, I couldn't stop, and read the entire book in one sitting, becoming entirely consumed by the characters and storyline.

I especially loved the amusing Slack channel names, Gerald and Pradeep’s chats, and the other employee interactions that took place over direct messages. The side stories, like Beverly and Tripp's secret office romance and the Bjärk dog food PR crisis made this a more engaging and hysterical read.

As someone who uses Slack religiously, and used to work for a consumer PR firm, I found this book to be relatable in so many ways. It might be a harder book to get into if you're not used to the Slack lingo, but with many of us working from home, and likely using the app, hopefully you'll find some humour in this one.

I can't recommend this enough. If you use Slack or any form of instant messenger for internal communications at work, this is an absolute must-read.

Calvin Kasulke is a writer based in Brooklyn, New York. A Lambda Literary Fellow, his writing and reporting have been featured in VICE, BuzzFeed, and Electric Literature. Several People Are Typing is his debut novel.

Several People Are Typing is available for purchase in hardcover format from Indigo and in e-book or audiobook format from Kobo. Check Penguin Random House CA for additional retailers.

Thank you to Doubleday Canada for my copy in exchange for this honest review!