A Memoir of Food and Family

PLENTY: A MEMOIR OF FOOD AND FAMILY

Food writer Hannah Howard is at a pivotal moment in her life when she begins searching out her fellow food people—women who’ve carved a place for themselves in a punishing, male-dominated industry. Women whose journeys have inspired and informed Hannah’s own foodie quests. On trips that take her from Milan to Bordeaux to Oslo and then always back again to her home in New York City, Hannah spends time with these influential women, learning about the intimate paths that led them each toward fulfilling careers. Each chef, entrepreneur, barista, cheesemaker, barge captain, and culinary instructor expands our long-held beliefs about how the worldwide network of food professionals and enthusiasts works.
But amid her travels, Hannah finds herself on a heart-wrenching private path. Her plans to embark on motherhood bring her through devastating lows and unimaginable highs. Hannah grapples with personal joy, loss, and a lifelong obsession with food that is laced with insecurity and darker compulsions. Looking to her food heroes for solace, companionship, and inspiration, she discovers new ways to appreciate her body and nourish her life. 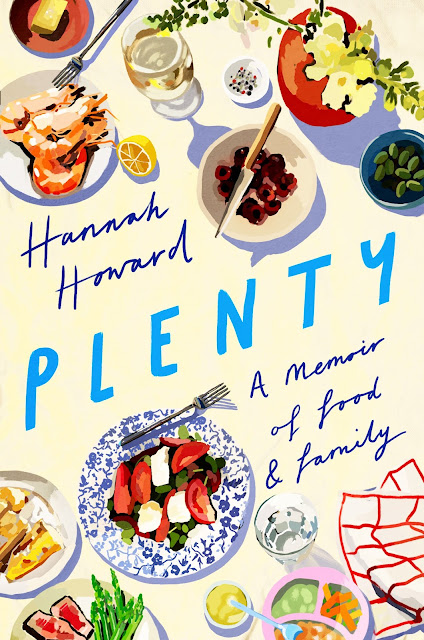 What I thought
I gravitated toward this memoir with hopes that it would be somewhat similar to Ruth Reichl's Save Me the Plums or Frank Bruni's Born Round, both of which I adored. It was in some senses like those books, but in other ways, Plenty was different in that Hannah Howard brought something refreshing to the table with this memoir by infusing her own personal triumphs with tales of many women in the culinary world who have inspired her.
The book itself is extremely well-written and adventurous. I enjoyed getting to know more about Hannah, what it was like for her growing up and working the food scene in New York, and her serious passion for food, “I loved food entirely,” she writes.
Howard has an insatiable drive and energy, which was clear back when she was interning at the Artisanal Premium Cheese Center, up until now with writing this important and timely book to highlight other driven women like herself.
I learned a lot from this book—a wealth of knowledge about how restaurants are run and the hierarchies within them, to fascinating facts about the food itself. Reading about Howard's worldly culinary adventures and enviable travel writing assignments was especially engaging.
Throughout the book, the reader meets a number of fantastic self-made women making a name for themselves in the culinary world, whether they're working as successful travel writers, hosting globally attended cooking classes via Skype, or running barge tours around France, they're all pursuing something that they're incredibly passionate about.
I really felt like I took a trip with this book, a true culinary journey from the Upper East Side in New York to all the places Hannah describes and talks about in the book like Oslo in Norway, Vergiate in Italy and Burgundy in France, to name a few. Howard really connects with her readers and invites them on those trips with her. And at a time when we can't travel due to COVID-19, it was fun to imagine those places in my mind.
Overall, Plenty was a delicious read. It could feel a tad disjointed at times, lacking some structure, but I believe Howard was successful in what she set out to do with this book which was to share more of her story and the stories of women who have inspired her. It's clear that Hannah is an incredibly talented writer. This was a great read.
Hannah Howard is a writer and food expert who spent her formative years in New York eating, drinking, serving, bartending, cooking on a line, flipping giant wheels of cheese, and managing restaurants. She writes about delicious things, teaches food writing classes, and might just spend all day at a market shopping for fruits and veggies.
Her work has been featured in New York Magazine, VICE, SELF, mic Thrillist, Serious Eats, Bust, refinery29, Salon, and the Chicago Review of Books. She lives in Brooklyn with her husband, cute puppy, and very cute daughter.

Plenty: A Memoir of Food and Family is available for purchase in hardcover format at Indigo and in e-book format on Kindle. Check GoodReads for additional retailers.

Thank you to Little A Publishing for my copy of this book in exchange for an honest review.