Love in the Big City by Sang Young Park

“At the sight of his neat profile, the whole world fell silent. As if we were the only two people left in it. I wanted to lift my hand and touch his forehead, nose, and lips, but I was afraid of waking him. Instead, I carefully brought my forefinger under his nose and felt his shallow breathing”

LOVE IN THE BIG CITY

Love in the Big City tells the story of a young gay man searching for happiness in the lonely city of Seoul. It is an energetic, joyful, and moving novel that depicts both the glittering nighttime world of Seoul and the bleary-eyed morning-after. Young is a cynical yet fun-loving Korean student who pinballs from home to class to the beds of recent Tinder matches. He and Jaehee, his female best friend and roommate, frequent nearby bars where they push away their anxieties about their love lives, families, and money with rounds of soju and ice-cold Marlboro Reds that they keep in their freezer.

Yet over time, even Jaehee leaves Young to settle down, leaving him alone to care for his ailing mother and to find companionship in his relationships with a series of men, including one whose handsomeness is matched by his coldness, and another who might end up being the great love of his life. 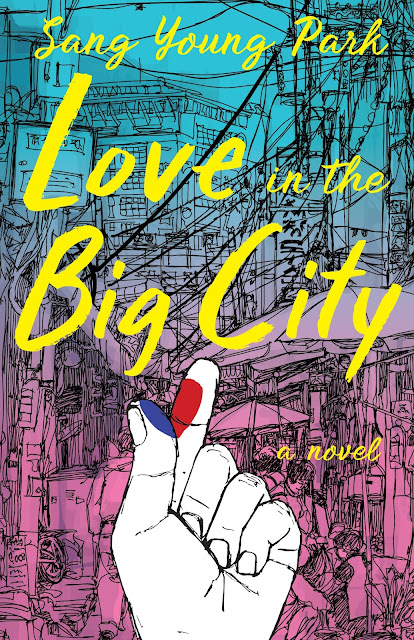 I was absolutely thrilled to read this debut LGBTQ+ novel by Sang Young Park. I love reading books that have come from other parts of the world and been translated into English. It always feels like a gift to be graced with international literary talent. I also read that it was one of the highest selling debuts of recent years in South Korea, and the first LGBTQ+ novel to be released in the country.

Love in the Big City is a unique story that took me on a vivid and culturally rich journey to Seoul for the day. The book is split into four smaller stories, each one set at a different period of Young's life, delving into his relationships with friends, loved ones, and his religious and sick mother, with whom he has a fraught relationship.

The book as a whole is an exploration of loneliness, relationships, and dysfunctional family dynamics, and is told from Young's perspective throughout. I enjoyed getting to know him as the story progressed. He’s an intriguing character, and it pained me at times to read about the homophobia he was subjected to. It felt as though Young never truly felt as though he could say what he was thinking, often holding back on speaking the truth, perhaps out of fear or judgment. The other characters that appear throughout the book like his best friend Jaehee, his mother, and his older lover are interesting and well-developed.

The most moving and engaging parts of the book for me were three and four, in which we get to see a different, more relaxed side to Young. These emotionally charged stories are about his intimate relationship with a man named Gyu-ho, and explore themes of love, long term relationships, and heartbreak.

I felt engaged and connected with Love in the Big City right from the first page. All in all, this was a great read and a special book. I look forward to seeing it hit the shelves on November 9th.

Sang Young Park was born in 1988 and studied French at Sungkyunkwan University. He worked as a magazine editor, copywriter, and consultant for seven years before debuting as a novelist. The title story of his bestselling short story collection, The Tears of an Unknown Artist, or Zaytun Pasta, was one of Words Without Borders’ most read pieces ever. He lives in Seoul.

Love in the Big City is available for pre-order (releasing November 9th) at Indigo. Check GoodReads for additional retailers.

Thank you to Grove Atlantic and NetGalley for this advanced reader's copy in exchange for an honest review.