“Everything was shared. A rhythm, the way the Alvarados moved along the hours and days and weeks of those calendars, year after year, had served as a thread of sorts that tied her family together.”

L.A. is parched, dry as a bone, and all Oscar, the weather-obsessed patriarch of the Alvarado family, desperately wants is a little rain. He’s harboring a costly secret that distracts him from everything else. His wife, Keila, desperate for a life with a little more intimacy and a little less Weather Channel, feels she has no choice but to end their marriage.
Their three daughters—Claudia, a television chef with a hard-hearted attitude; Olivia, a successful architect who suffers from gentrification guilt; and Patricia, a social media wizard who has an uncanny knack for connecting with audiences but not with her lovers—are blindsided and left questioning everything they know. Each will have to take a critical look at her own relationships and make some tough decisions along the way. 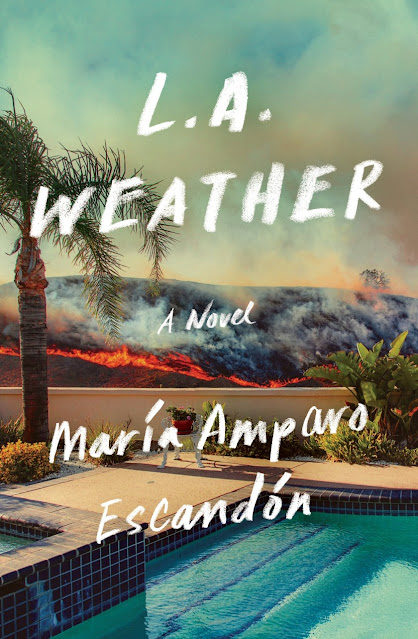 What I thought
I love Los Angeles and I love family dramas so I adored L.A. Weather. A fantastic Reese Witherspoon book club pick that I couldn't get enough of. In Reese we trust when it comes to book choices, and this one didn't disappoint.
Readers meet Olivia, Claudia, and Patricia, the three Alvarado daughters at the beginning of L.A. Weather. They're brought together by a tragic event that involves Olivia’s kids, Diane and Andrea, at their grandparent’s home in Los Angeles.
Drama strikes once more shortly after, and the Alvarado family are brought together again when Keila announces that she'll be divorcing their father, Oscar. The announcement shakes the kids to their core, and they can't comprehend why their mother would divorce him after thirty-nine years of marriage. What they don’t know is that the reason Oscar has become so withdrawn and hopeless, is because he’s harbouring a secret that’s weighing heavily on him.
The reader learns a lot more about the Alvarado family throughout the book, which takes place over the course of one year. We learn about their jobs, partners, kids, and where they live. They’re all intriguing in their own manner, each one well-educated and highly successful in their respective field. As well as the parents, the daughters are each going through and confronting their own marital and health problems.
Escandón breathes oxygen into her characters, really bringing the Alvarado family to life in this book. A seemingly ordinary Mexican American family is made to feel extraordinary. I felt really engaged from the beginning, and the constant family drama and dysfunctional interactions kept me reading compulsively from beginning to end.
Maria's prose is so strong and vividly descriptive. Just reading L.A. Weather, I felt like I was a part of the story, where I was allowed unrestricted access to the Alvarado family and all that came with them.
Absorbing, beautifully written, and hilarious at times, L.A. Weather was a heartwarming character driven novel that was well worth the read.
María Amparo Escandón is a Mexican born, US resident, best-selling bilingual novelist, short story writer, screenwriter, and film producer. Her award-winning work is known for addressing bicultural themes that deal with the immigration experience of Mexicans crossing over to the United States. Her stories concentrate on family relationships, loss, forgiveness, faith, and self-discovery. Her work has been translated into over 21 languages and is currently read in more than 85 countries.

L.A. Weather: A Novel is available for purchase in hardcover format from Indigo and in e-book or audiobook format from the Amazon Kindle store. Check GoodReads for additional retailers.