Told in the intimate voices of unique and endearing characters of all ages, these tales explore desire and heartache, loss and discovery, moments of jolting violence and the inexorable tug toward love at all costs.
A bookseller's unspoken love for his employee rises to the surface, a neglected teenage boy finds much-needed nurturing from an unlikely pair of college students hired to housesit, a girl's loss of innocence at the hands of her employer's son becomes a catalyst for strength and confidence, and a proud nonagenarian rages helplessly in his granddaughter's hospital room.
Romantic, hopeful, brutally raw, and unsparingly honest, some even slipping into the surreal, these stories are, above all, about King's enduring subject of love. 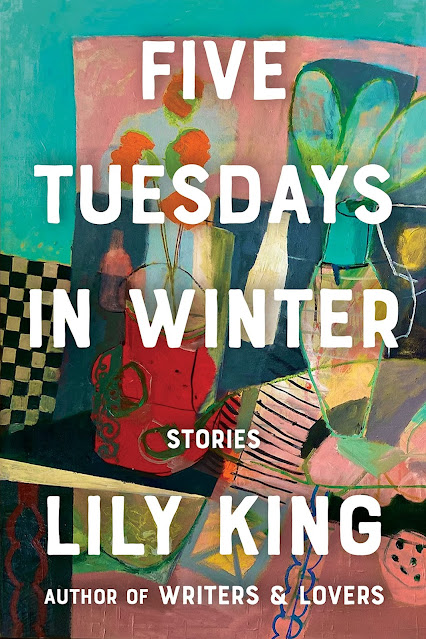 What I thought
Five Tuesdays in Winter is a gorgeous collection of ten short stories. Love, loss, and human connection are the foundational themes of each tale, and King does a beautiful job of portraying these themes throughout.
Out of the ten, there were two tales that truly captured my heart and stayed with me long after I finished reading them. The first was one called Five Tuesdays in Winter, which is about Mitchell, a bookstore owner whose wife left him because of his inability to show emotion. Deeply affected by this loss, he now has a fear of showing a growing affection for his employee Kate. The two bond over mushroom soup while Mitchell ponders over whether to get her a gift for her upcoming birthday, which falls on Valentine's Day.
The second story was called When in the Dordogne, and is about a young high school boy who is left in the care of two college sophomore students named Ed and Grant while his parents take off for the summer to deal with his father's breakdown.
Ed and Grant show the boy a new way of living, giving him the courage to live a more free and unrestricted life, unbound from the rules and shame his parents place on him. When in the Dordogne is vibrant, uplifting, and full of life. A story with a lot of reading between the lines, it was unique and compelling, and left me wanting more.
Although I’ve just highlighted two, other heartbreaking tales such as Hotel Seattle and Waiting for Charlie were deeply moving and thought-provoking. I never knew what to expect when finishing one story and beginning a new one.
Five Tuesdays in Winter was a reminder of why I love short stories, because each one has the power to take you somewhere new, and that's exactly what the stories in this book did. Every story in the book felt like a journey to a new place, with Lily's prose powerful enough to evoke an array of emotions with each one I read. The stories are thoughtfully crafted and appealing, with a cast of characters that leave you with a desire to know more about them.
I felt drawn in and engaged from the first page, and found it hard to put this one down, reading the entire book in one sitting. It was my first time reading Lily King's work, and I actually have a copy of her book Writers & Lovers on my shelf, which I now feel drawn to pick up after finishing this one.
Lily King is the award-winning author of five novels. Lily’s first short story was published in Glimmer Train in 1991. Other stories, essays, and reviews have since appeared in a variety of publications, including The New York Times, The Washington Post, Vogue, The Los Angeles Review of Books, One Story, The Harvard Review, Ploughshares, and several anthologies. Her novels have been published in 20 languages.

Thank you to Grove Atlantic and NetGalley for my advanced reader's copy in exchange for this honest review.