“You can choose the right shot, you can have a good swing and good technique, you can do everything right, and it can still go wrong. No player, no matter how good, makes one hundred percent of their shots.”

The Delaneys are fixtures in their community. The parents, Stan and Joy, are the envy of all of their friends. They’re killers on the tennis court, and off it their chemistry is palpable. But after fifty years of marriage, they’ve finally sold their famed tennis academy and are ready to start what should be the golden years of their lives. So why are Stan and Joy so miserable?

The four Delaney children—Amy, Logan, Troy, and Brooke—were tennis stars in their own right, yet as their father will tell you, none of them had what it took to go all the way. But that’s okay, now that they’re all successful grown-ups and there is the wonderful possibility of grandchildren on the horizon.

One night a stranger named Savannah knocks on Stan and Joy’s door, bleeding after a fight with her boyfriend. The Delaneys are more than happy to give her the small kindness she sorely needs. If only that was all she wanted.

Later, when Joy goes missing, and Savannah is nowhere to be found, the police question the one person who remains: Stan. But for someone who claims to be innocent, he, like many spouses, seems to have a lot to hide. Two of the Delaney children think their father is innocent, two are not so sure—but as the two sides square off against each other in perhaps their biggest match ever, all of the Delaneys will start to reexamine their shared family history in a very new light. 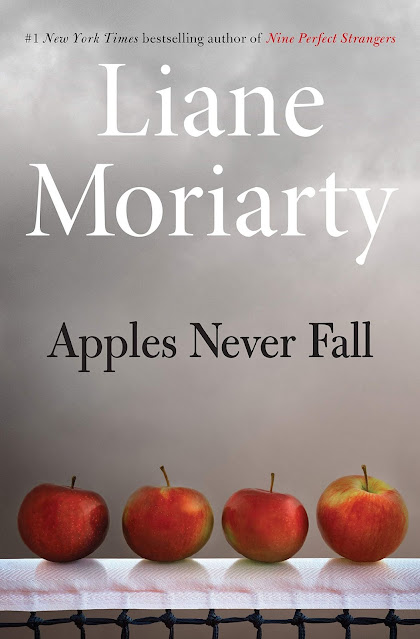 This was my first Liane Moriarty book, which surprised me because I was such a fan of the adaptations for her novels Big Little Lies and Nine Perfect Strangers.

I was drawn to read Apples Never Fall in particular because I've been on a bit of a thriller kick lately and the reviews for this one are fantastic. I consumed the entire novel in just a few sittings, so it definitely didn’t disappoint.

One evening, a young girl called Savannah shows up at their door after a domestic altercation with her boyfriend. They invite Savannah to stay and suddenly it's as though a void has been filled for Joy. She has someone to care for again. The kids find out about Savannah and their suspicion about this strange girl staying with their parents begins to build.

The story then transitions to the following year on Valentine’s Day when Joy Delaney mysteriously disappears and an investigation is sparked.

I liked how seamlessly the book moved back and forth through passages of time with the story being told from different points of view from before Joy’s disappearance to afterwards. Having these varying perspectives made for fantastic character development and thickening of the plot.

Readers learn a lot about the Delaney family in the book, and as the story progresses and suspense and suspicion build, the reader comes to understand the importance of Savannah as a character and her possible relation to Joy's disappearance. The Delaney kids are all interesting and unique characters, with each one going through their own issues and harbouring secrets from the rest of the family.

What I thought was particularly unique was the introduction of bystanders as developed characters. Using these additional cast members really helped paint an accurate picture of the surroundings of the main characters as events unfolded.

Apples Never Fall is strong in character description and development. The characters are each brought to life with Moriarty's vivid prose. Each of the Delaneys and Savannah develop well as the plot progresses, keeping the reader engaged and entertained throughout. There’s even a bit of humour to the writing.

I can see why Moriarty has a huge following. Her writing is phenomenal, the kind that flows seamlessly from one line to the next. Apples Never Fall was an addictive read for me, and I didn't want to reach the end.

Apples Never Fall is available for purchase in hardcover format from Indigo or in e-book or audiobook format from Kobo. Check GoodReads for additional retailers.