“Face your truth. Even if it’s scary. When you believe in yourself and your talent, no one can take that away from you. But no one can give it to you either. No compliment, no role, no review. That is your journey.”

Aspiring actor August Greene just landed a coveted spot at the prestigious School of Performing Arts in New York. There’s only one problem: His conservative parents won’t accept that he’s transgender. And to stay with his aunt in the city, August must promise them he won’t transition.

August is convinced he can play the part his parents want while acting cool and confident in the company of his talented new friends.

But who is August when the lights go down? And where will he turn when the roles start hitting a little too close to home? 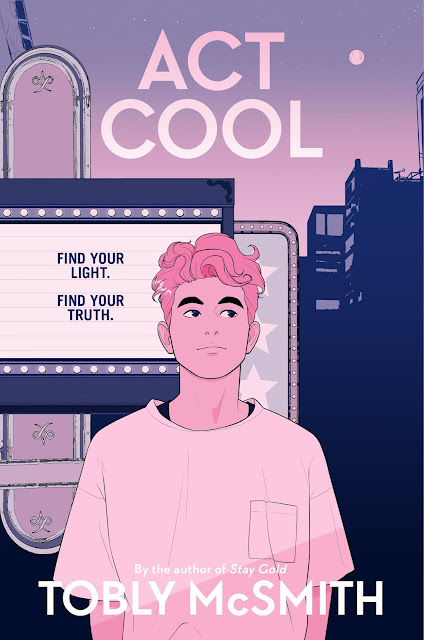 I can't remember the last time I was this excited to read a new book. This one has been on my list for quite a while and I was thrilled to receive a copy from HarperCollins Canada.

Act Cool is ultimately a book about self-acceptance with strong LGBTQ+ themes throughout. It's a timely and important read, not only for teens and young adults, but for everyone.

The book follows the life of main protagonist, August Greene, a trans teenager struggling with finding himself. We meet him when he's recently run away from his mother and stepfather who live in the conservative town of West Grove, Pennsylvania.

He's fresh to New York City, auditioning for the acclaimed and prestigious School of Performing Arts, and living with his aunt Lilian, a fun-loving and accepting artist and closeted lesbian, who also feels forced to hide her identity from her religious family.

Aunt Lil is a wonderful character who supports August in every aspect of discovering his true identity. She took him in after finding out his parents were considering sending him to a conversion therapy called Brand New Day which pushed August to experience dark thoughts and suicidal ideation.

“Things got dark after coming out to my parents. I was lost. And uncomfortable in a body that continued to defy me with the beginning of boobs and hips.”

August is a complex character, a talented actor used to playing the part of daughter for his parents, and various other parts for other people in his life. But it's just now, with aunt Lil and his new friends at school that he's truly discovering who he is, rather than the parts he's become an expert at playing.

What's clear is just how much our main protagonist seeks acceptance off the stage living a new life where he feels lost, and I was glad he got some of that immediate acceptance fulfilled from his outgoing friends at school.

The book explores a lot of intense real life emotions that will be relatable to many, especially the response from August's non-accepting parents, which angered me throughout. It's heartbreaking to see how much he misses his mom despite her forcing August to live life as a female, with severe consequences if he doesn't.

Act Cool was highly readable, enjoyable, and engaging. I came to really love the range of vibrant and diverse characters as the story developed, especially Aunt Lilian, Juliet, and Elijah. There's also some great LGBTQ+ representation and use of pronouns throughout.

Overall, I found this book to be a deeply touching and heartwarming, and it was written in a beautiful way. I recommend it for anyone who has struggled with gender, identity, or sexuality.  It was my first Tobly McSmith novel, and now I can't wait to purchase a copy of his debut, Stay Gold, which I've heard great things about.

Tobly McSmith is the co-creator/writer of seven somewhat successful musical parodies, including Friends! The Musical Parody. Tobly was born in Texas. He now lives in New York City with his two cats, Buster and Bananas McSmith. Tobly is proud to be transgender.

Act Cool is available for purchase in hardcover format from Indigo and in e-book or audiobook format from Kobo. Check HarperCollins Canada for additional retailers.

Thank you to HarperCollins Canada for my copy in exchange for this honest review.