We're Not Broken by Eric Garcia

“I hope that parents and loved ones of autistic people take the lessons of this book to heart so that they can be effective allies.”

With a reporter’s eye and an insider’s perspective, Eric Garcia shows what it’s like to be autistic across America. In We’re Not Broken, Garcia uses his own life as a springboard to discuss the social and policy gaps that exist in supporting those on the spectrum. From education to healthcare, he explores how autistic people wrestle with systems that were not built with them in mind.

At the same time, he shares the experiences of all types of autistic people, from those with higher support needs, to autistic people of color, to those in the LGBTQ community. In doing so, Garcia gives his community a platform to articulate their own needs, rather than having others speak for them, which has been the standard for far too long. 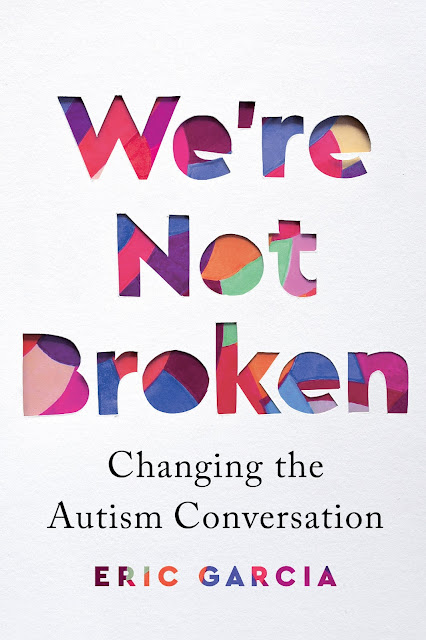 I felt compelled to read this book after reading Eric's article, I'm Not Broken, published by The Atlantic.

I knew very little about autism before reading the article, aside from what I had seen portrayed in television and the media. I can only really think of the heartfelt Netflix show Atypical when I think of autism, which I had always just assumed was doing a good job at portraying the protagonist Sam's struggle on the spectrum.

That was about as far as my knowledge on the subject went, and despite it being a good show in my opinion, it only really shows the struggle of one person, who I’ve come to learn through Eric, is the exact stereotype (a white male working in technology).

Garcia actually references Atypical in his the relationships section of his book, saying that the problem with these shows is that, “they perpetuate the stereotype that autistic men don’t know how to treat women with respect.”

Reading Garcia's book, I was shocked to learn about the misinformation that’s spread about autism in recent years. In his introduction, Eric talks about the false link between vaccines causing autism, a claim that was popularized by celebrity Jenny McCarty on CNN and The Oprah Winfrey Show, then later claimed by Donald Trump.
I also learned that there are beliefs that autism only affects white men, that autistic people are incapable of holding jobs outside of the technology field, and that those on the spectrum are unable to have relationships or live independently. Perhaps most shocking are the claims that state a connection between autism and violent behaviour, with people referencing mass shooters in the United States, who they believe are on the spectrum.

“There is too much mythology and not enough data, an unfortunate reality that desperately needs to be counteracted,” Garcia states in his book.

We're Not Broken is a well researched, fantastically written, and compelling book. I appreciated Garcia's honesty and vulnerability when sharing his own story of living in America with autism. I loved reading about his passion for music, politics, and journalism, and how he interned at The White House and climbed the ranks to work at some of the biggest publications in Washington.

He also profiles others from underserved communities outside of the typical stereotypes, highlighting and interviewing people of colour, LGBTQ+ people, women, people from low income households, and people in all lines of work.

When talking about work in particular, Garcia says, “autistic people’s value and worth should not be tied to whether they are employable. It doesn’t matter if an autistic person holds a high paying job or receives government assistance; autistic people should be viewed with the same dignity that all people deserve.”

What is immediately clear from the book, and from those that Garcia encounters, is just how misunderstood autism is.

I was appalled to read about the kinds of inhumane treatments that have been used for autism, such as long term institutionalization to remove people with autism from the community, the use of a graduated electronic decelerator (GED) to administer shocks, secretin injections, and chelation therapy, which involves injecting a binding agent into the bloodstream to remove toxic chemicals.

Garcia mentions it in his book, and I’ve also heard in the media of parents who believe feeding their children a gluten-free diet is a cure for autism. The list of “cures” goes on, which you can read about in depth in the health chapter of the book.

Garcia has done a remarkable job at shedding a light on an extremely important topic, and it’s my hope that people can read this book and walk away with a new perspective and understanding of autism. I certainly learned a lot from this book.

We’re Not Broken is an essential read not only for parents, friends, doctors, teachers, and researchers, but for everyone.

Eric Garcia is a journalist based in Washington, D.C. Previously, he was an assistant editor at the Washington Post's Outlook section and an associate editor at The Hill and a correspondent for National Journal, MarketWatch and Roll Call. He has also written for the Daily Beast, the New Republic, and Salon.com. Garcia is a graduate of the University of North Carolina at Chapel Hill.

We're Not Broken is available for purchase in hardcover format from Indigo and in e-book or audiobook format from Kobo. Check GoodReads for additional retailers.

Thank you Mariner Books for this copy in exchange for an honest review.