The Bridge by Bill Konigsberg

“The George Washington Bridge shimmers at night, all these years later. So many glimmering stars along its north and south necklaces. We think of its majesty, we marvel at its beauty.”

Aaron and Tillie don't know each other, but they are both feeling suicidal, and arrive at the George Washington Bridge at the same time, intending to jump. Aaron is a gay misfit struggling with depression and loneliness. Tillie isn't sure what her problem is—only that she will never be good enough.
On the bridge, there are four things that could happen:
Aaron jumps and Tillie doesn't.
Tillie jumps and Aaron doesn't.
They both jump.
Neither of them jumps. 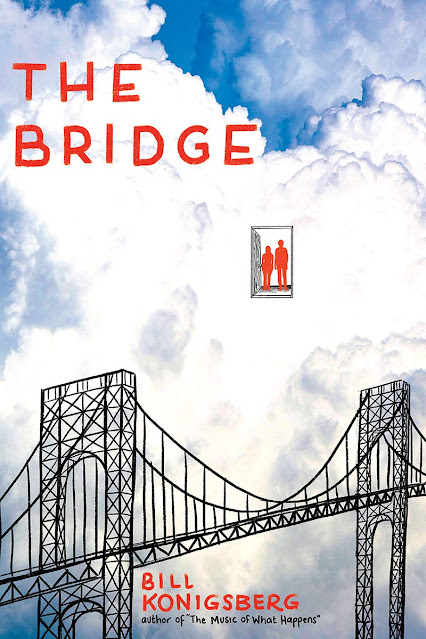 What I thought
I knew that The Bridge by Bill Konigsberg would be more of a challenging, and perhaps triggering read due to the subject, but I felt compelled to read it after reading that the book was inspired by Bill's own suicide attempt and survival.
I read a New York Times review that mentioned Konigsberg's “gratitude” that he got “a second chance at life,” and that the novel is about finding a way through the worst moments, with the right treatment and support systems.
The Bridge opens on April 17th at 3:54 P.M, when Aaron Boroff and Tilly Stanley find themselves standing on the George Washington Bridge. Right away, Konigsberg had my full attention, compelling me to keep reading, to find out more about Aaron and Tilly, and what had led them to this moment.
Neither of them expected the other to be here, but it's clear from the outset that life has become too much of a burden for the main protagonists, and so on this day, they plan to take their last steps overboard.
There are four stories in The Bridge, and each one starts out on the same day, at the same time. Throughout each of the four stories, with four different ending.
The book transitions seamlessly between the various characters in each short story, and shows what each person is feeling in the aftermath. We see the effect on the onlooker and their severe trauma, the families and their unfathomable grief, and the friends and others in the life of the victim, who each deal with it in their own way.
Deeply thought-provoking and beautifully written, at the heart of this novel are themes of love, friendship, openness, and acceptance. Also, the importance of support systems, and talking in times of distress.
The Bridge shows what can happen both when you avoid feelings, and when you talk about them. It shows what can happen if you go through with one goes through with the act of ending one's life, and if one doesn't.
Konigsberg did a really fantastic job with this novel. It really blew me away, and kept me completely captivated from cover to cover. I couldn't put it down, and read the book in just a few sittings over the course of one day.
The Bridge is an incredibly accurate portrayal and exploration of many themes, including teenage suicide, depression, bipolar disorder, LGBTQ+ struggles, and high school bullying.
When referring to the book, which took him two years to write, Konigsberg says, “My hope was to write a book about suicide and depression that was so real you could feel it in your bones, but that also felt hopeful, that left the reader with a sense that there was hope, because to me that's everything,” he continues, “I hope that one person with suicidal ideation or severe depression will read this book and decide to stay.”
In his author's note, Konigsberg states a strong belief in talking more about suicide, in order to demystify it. “We need to discuss the entirety of suicide, including the impacts. Including the alternatives.”
While I didn't find the book to be too triggering, I can't speak for everyone, so I highly recommend ensuring you have the right support systems in place when reading this, especially if you're prone to being triggered by talk of suicide.
If you ever feel you are a danger to yourself, or to anyone else, please call 911 or go to your nearest emergency room. You can also connect with the Canada Suicide Prevention Services 24/7/365 by calling 1-833-456-4566. Visit their website for more information.
Bill Konigsberg is the award-winning author of six young adult novels. Prior to turning his attention to writing books for teens, Bill was a sports writer and editor for The Associated Press and ESPN.com. He lives in Phoenix, Arizona, with his husband, Chuck, and their Australian Labradoodles, Mabel and Buford.

The Bridge is available for purchase in hardcover format from Indigo or in e-book or audiobook format from Kobo. Check GoodReads for additional retailers.

Thank you to Scholastic Press for my copy in exchange for this honest review.