A Memoir in Letters Never Sent

“In spite of my feelings of wrongness, of never being good enough, or valued or equal, I still, somehow, believed in love. Specifically, gay love.”

In 1992, Brian Francis placed a personal ad in a local newspaper. He was a twenty-one-year-old university student, still very much in the closet, and looking for love. He received twenty-five responses, but there were thirteen letters that went unanswered and spent years tucked away, forgotten, inside a cardboard box.

Now, nearly thirty years later, and at a much different stage in his life, Brian has written replies to those letters. Using the letters as a springboard to reflect on all that has changed for him as a gay man over the past three decades, Brian's responses cover a range of topics, including body image, aging, desire, the price of secrecy, and the courage it takes to be unapologetically yourself. 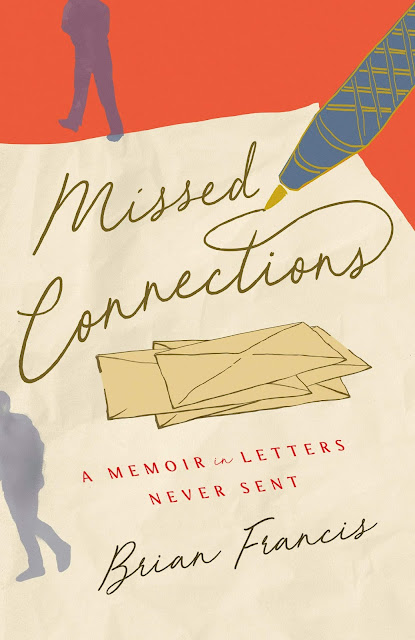 I featured this book in my top LGBTQ+ selects on Daily Hive for Vancouver Pride. I hadn't planned to review the book for Avocado Diaries, but I just absolutely fell in love with it, and wanted to share it with my readers here.

Missed Connections is a gorgeously written, heartwarming book with sprinklings of comedy throughout. It's charming, engaging, and deeply moving. The book opened my eyes to what coming out and being gay was like in the 80s and early 90s, right around when I was born. When I came out, it was to a different world. Albeit, it was still a world that didn't accept me for being me.

As a gay male in my 20s, I found the book so incredibly relatable. The first letter to Dwayne resonated with me a lot. In it, Brian talks about his ongoing struggles with his weight, shape, and body image.

“I’ll never have a body that I’ll be entirely comfortable with, one that will make me want to walk around naked in front of someone when the lights are on. A body that I’ll forget during sex, that I’ll send a photo of to a stranger as a selling point.”

Francis also talks about the gay bar scene in this letter, about how he wanted to be himself, but still felt a need to perform, and how when seeking companionship, he would find himself walking away feeling lonelier than the start of the night. The bar was where he sought solace, but instead he felt judged.

One of the letters, to a teacher called Craig, moved me to tears. In it, Brian talks about having to conform in order to fit into the socially accepted norms in high school. When talking about being crowned prom king, he states that it wasn’t really him, “He was someone I’d created to make everyone like him. Someone who had learned to play by everyone else’s rules in order to stay safe.” This heartfelt and emotionally charged letter focuses on life in school as a closeted gay, and anyone who has been there may be able to relate.

I attended high school many years after Brian, and it saddens me that not much had changed in those years. The hallways still reeked of disapproval, the need to hide my true self and be someone else was still very much alive. I graduated ten years ago now, and I only hope that the positive shift I’ve seen in recent years is also happening in schools. I hope high school feels safer for LGBTQ+ folks, because it didn’t for Brian over thirty years ago, and it still didn’t for me ten years ago.

All in all, this book was a real pleasure to read. I stayed up late into the night, curled up on my sofa with a blanket, reading it. I thoroughly enjoyed reading the initial replies to Francis’ newspaper ad, and his responses that followed thirty years later. Once I started this book, I couldn’t put it down. It was a compulsive read, and one that I’ll recommend to many of my friends who will also be able to relate.

Brian Francis is the author of three novels: Fruit, a 2009 Canada Reads finalist; Natural Order, which was selected by the Toronto Star, Kobo, and Georgia Straight as a Best Book of 2011; and the YA novel Break in Case of Emergency, a finalist for the 2019 Governor General’s Literary Awards. His most recent book is Missed Connections: A Memoir in Letters Never Sent, which was inspired by his play, Box 4901 (co-created with Rob Kempson), which premiered at Buddies in Bad Times Theatre in 2020 to sold-out audiences. He lives in Toronto.

Missed Connections is available for purchase in paperback format at Indigo and in e-book format from Kobo. Check Penguin Random House CA for additional retailers.

Thank you to McClelland & Stewart for this gifted copy in exchange for an honest review.