It Never Ends by Tom Scharpling

A Memoir with Nice Memories!

“When I talked into that mic and said whatever I was thinking, the universe literally handed me my voice. I might’ve taken on the name Tom Scharpling a couple of years earlier, but this was the moment that I truly became Tom Scharpling.”

Tom Scharpling is good at being funny, which is a miracle, considering what he's survived. Like hitting a deer and narrowly escaping with his life on the night of the 2016 election. But that's nothing compared to the struggles he had earlier in his life.
It Never Ends is his memoir of a life writing comedy amidst a lifelong struggle with mental illness, a story he has never told before. It’s the heartbreaking account of his intense coming-of-age, and the lengths he's undertaken to pull away from the brink of self-destruction.
Tom is the quintessential underdog, and he wears that status on his sleeve as a badge of honour. With this memoir, he lifts the curtain to let the light in on the turmoil that still follows him, even as he racks up accolades and achievements. But most importantly, he reminds us that while many of us carry trauma and shame, we are not alone. 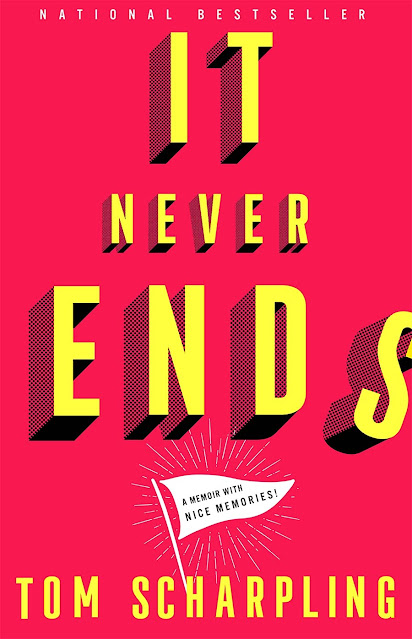 What I thought
Tom Scharpling had me laughing within moments of reading It Never Ends. The book opens with him discussing his reasons for writing a memoir, how he initially hesitated, and how DJ Khaled’s book The Keys eventually led him there.
When talking about the book and what it’s about, Tom states, “It’s a tale of triumph, of sadness, of overcoming the odds. But mostly it is a story about me getting mad at dumb stuff that happened to me or me making dumb stuff happen that made other people mad. Either which way, it is my life.”
I had no idea of the extent of Scharpling’s battles with mental illness or his ECT treatment and serious side effects as a result. When talking about ECT, Tom states, “I felt like a piece of my soul was removed every time I came out the other end.” Scharpling suffered severe memory loss due to ECT, losing the first eighteen years of his life.
One thing I loved about this book was that it could have been filled with sadness, but it wasn't, and maybe that's why Scharpling didn't go too deep into discussing his illness and subsequent treatment. His humour and career highlights sprinkled throughout made the book more of an uplifting read, and added some brightness to what could have been a dark and otherwise depressing read.
I felt Tom really leaned into his vulnerability in this memoir, and was brutally honest. Most of the book focuses on Tom's growing up, his love of music and comedy, and how he came to be on air with The Best Show, which made it more of a fun read.
All in all, this was a well written memoir that gave me great insight into Tom Scharpling's life, and some knowledge about the world of comedy and the entertainment industry along the way. I thoroughly enjoyed It Never Ends, and have a newfound love and appreciation for Tom Scharpling. Tom's fans are called Friends of Tom (FOT), and he's found a new friend in me with this book.
I received this book courtesy of Abrams, via Manda Group, and was delighted for the opportunity to read and review it.
Tom Scharpling is a comedian, television writer, producer, music video director, and radio host. For 18 years, he has hosted the weekly radio call-in comedy program The Best Show with Tom Scharpling. He is also known as the voice of Greg Universe on the hit Cartoon Network animated series Steven Universe. Previously he was a writer-executive producer for the Emmy Award-winning show Monk.

It Never Ends is available for purchase in hardcover format from Indigo and in e-book format from Kobo. Check GoodReads for additional retailers.

Thank you to Abrams for my gifted copy in exchange for this honest review.