In conversation with Lily Chu

Lily Chu is the debut author of The Stand In. She loves ordering the second-cheapest wine, wearing perfume all the time, and staying up far too late with a good book. She writes romantic comedies set in Toronto with strong Asian characters.

Congratulations on your debut book! I've read some phenomenal reviews. What inspired you to write The Stand In?

Thank you! I started writing The Stand-In in early 2020 after I’d been thinking over some issues regarding racism and representation that had come up (again) in the romance genre. I decided I wanted to write a book about a woman who shared my background, since I don’t often see biracial people in books. It also had to be funny, a feeling that intensified as writing became my escape in the early months of the pandemic.

It must have felt exciting to give protagonist Gracie Reed her voice through the audiobook. What was it like to record with Phillipa Soo?

I was thrilled when I found out Phillipa was going to narrate The Stand-In. I have so little cool about this I can’t even fake being cool about it.

One of my biggest regrets about the process is that I didn’t have the opportunity to watch any part of the recording or the hard work done by the editing and production teams because travel wasn’t possible. As part of the process, there’s a draft of the manuscript that’s adjusted for audio—for instance, instead of saying a character raised their voice, that dialogue tag can be removed, and it can be performed with a raised voice. I also put in notes on how I visualized the emotional resonance of specific scenes or lines. Then Phillipa and I had a call to discuss the characters in more detail, and why their voices might sound the way they do. It’s not something I needed to consider when writing, and it was an interesting exercise to talk through it.

I'm thrilled to hear the book is going to print next year. How do you feel about The Stand In hitting shelves?

I love having the audio experience and I think seeing it in print will be as exciting. We interact with content in different ways depending on the platform, so I’m looking forward to seeing how readers react to the text on the page. There’s also something very viscerally satisfying about holding an object that came out of your imagination.

Do you have any advice for aspiring authors out there trying to get their manuscripts published?

I’ve heard a ton of advice over the years and out of it all, this is what works for me.

Constant effort. I’m pretty lazy, so I need to write or edit or do something every day to keep the momentum.

Building a thick skin. I’ve been rejected at every stage of the publishing process so many times that I’m now resigned to, if not happy with, rejection.

Perseverance. Related to the above point. Whenever I hit a roadblock I try again or try something new.

Knowing when to stop. Eventually I need to stop messing around with a manuscript and give it to other people to read and critique.

You're based in Toronto, where there's no shortage of things to do. What do you like to do when you're not writing?

This is going to sound boring, but I walk around the city to look at people and eavesdrop on passing conversations. I usually return from these walks with a selection of things that I probably don’t need but have grabbed my attention in stores. Recently I came back with a pair of socks with cats on them, bandages, coffee beans, and a book about ninjas. My go-to strolls are:

Designer Special. Get off at Queen Station and go north along Yonge to Bloor. Then west through Yorkville and keep going for as long as you want.

Cross-Town. Start on the west side of Bloor at any point and go east over the Bloor Viaduct and onto the Danforth.

Waterfront. Start at Harbourfront and walk east or west along Lake Ontario. I like going west over the Humber Bridge and through the Butterfly Garden.

Chinatown/Market. Start at College Street and go south on Spadina through Chinatown. Then go west on Dundas and back north through Kensington Market.

Are you reading anything right now? Any must-reads you're hoping to get to over the next while?

There are too many must-reads! I recently got into honkaku, which is a genre of Japanese mystery story. I can never guess the ending and I always have to go back to see what I missed. I read The Tokyo Zodiac Murders by Soji Shimada in a day. I’m listening to One Last Stop by Casey McQuiston and reading Hummingbird Salamander by Jeff VanderMeer between rounds of editing. On the non-fiction side, I’m reading The Confidence Game by Maria Konnikova, about why we fall for con artists. 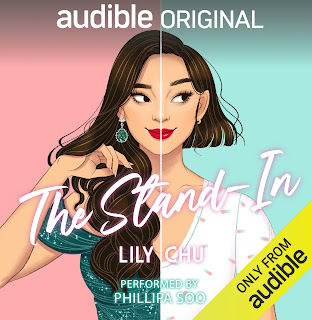 Gracie Reed is doing just fine. Sure, she was fired by her overly "friendly" boss, and, yes, she still hasn’t gotten her mother into the nursing home of their dreams, but she’s healthy, she’s (somewhat) happy, and she’s (mostly) holding it all together.
But when a mysterious SUV pulls up beside her, revealing Chinese cinema's golden couple Wei Fangli and Sam Yao, Gracie’s world is turned on its head. The famous actress has a proposition: due to their uncanny resemblance, Fangli wants Gracie to be her stand-in. The catch? Gracie will have to be escorted by Sam, the most attractive—and infuriating—man Gracie’s ever met.
If it means getting the money she needs for her mother, Gracie’s in. Soon Gracie moves into a world of luxury she never knew existed. But resisting Sam, and playing the role of an elegant movie star, proves more difficult than she ever imagined—especially when she learns the real reason Fangli so desperately needs her help. In the end, all the lists in the world won’t be able to help Gracie keep up this elaborate ruse without losing herself...and her heart.
LISTEN EXCLUSIVELY ON AUDIBLE
Labels: in conversation with
Location: Vancouver, BC, Canada