People From My Neighbourhood by Hiromi Kawakami

In twenty-six “palm of the hand” stories—fictions small enough to fit in the palm of one’s hand—Hiromi Kawakami creates a universe ruled by mystery and transformation.

PEOPLE FROM MY NEIGHBOURHOOD

A bossy child who lives under a white cloth near a t­ree; a schoolgirl who keeps doll’s brains in a desk drawer; an old man with two shadows, one docile and one rebellious; a diplomat no one has ever seen who goes fishing at an artificial lake no one has ever heard of.
These are some of the inhabitants of People From My Neighborhood. In their lives, details of the local and everyday—the lunch menu at a tiny drinking place called the Love, the color and shape of the roof of the tax office—slip into accounts of duels, prophetic dreams, revolutions, and visitations from ghosts and gods. 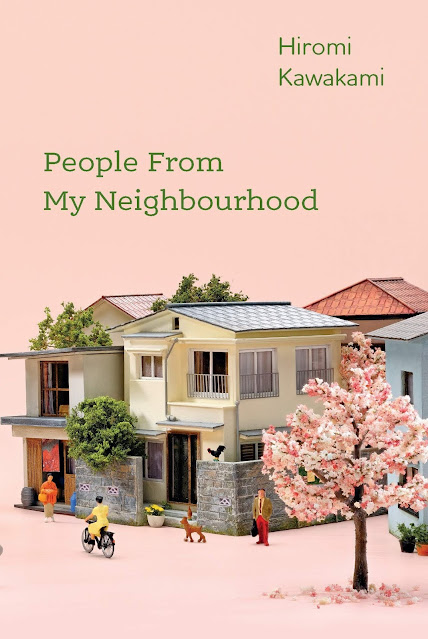 Twenty-six bizarre and surreal little stories of 2-3 pages each which kept me company at 3 o’clock in the morning when I couldn’t sleep, author Hiromi took me from a dream like state to a fantasy world.
The stories may only be a few pages, but each one packs a punch. I adore short stories like this, especially Japanese fiction, and would love to see more translated to English.

The book also stirred up my imagination and really got me thinking. I started considering the neighbours in my very own apartment building, each with their own story to tell. We only ever pass by each other on the way to the laundry or garbage room. Sometimes I see them when I take my dog outside, and even then it’s just a polite “hello, how are you?”
People From My Neighbourhood left me wondering who my neighbours really are, where they go every day and what they get up to in their free time. I spent much of the day deep in thought about this, and each time someone passed by me, I remembered the stories from this book and thought to myself “hmm, where’s she off to?”
My favourite part of this book is how all the neighbours actually connected in the end, each of them knowing a part of the other one's story. Just like a real suburban street, there’s gossip, whispers, true friendships, and chatter among those who live nearby.
If you need an escape from the real world, People in my Neighbourhood is a great book for you.
Hiromi Kawakami was born in Tokyo in 1958. Her first novel, Kamisama (God), was published in 1994. In 1996, she was awarded the Akutagawa Prize for Hebi o Fumu (Tread on a Snake) and in 2001 she won the Tanizaki Prize for her novel Sensei no Kaban (Strange Weather in Tokyo), which became an international bestseller. Strange Weather in Tokyo was shortlisted for the 2013 Man Asian Literary Prize and the 2014 International Foreign Fiction Prize. Hiromi Kawakami has contributed to editions of Granta in both the UK and Japan and is one of Japan’s most popular contemporary novelists.
Ted Goossen is a professor of Japanese literature at York University in Toronto, Ontario, Canada. His daughter is actress Jeananne Goossen.

People from my Neighbourhood is available for pre-order from Indigo and on Kobo. Check GoodReads for additional retailers. The title will be releasing November 2021.