Out North by Craig Jennex and Nisha Eswaran

Out North: An Archive of Queer Activism and Kinship in Canada by Craig Jennex and Nisha Eswaran is a fascinating and wide-ranging documentation of queer history, activism, and community that examines the vast collection of The ArQuives, the largest independent LGBTQ2+ archives in the world. In reproducing and returning to these historical materials, the authors speak to the possibilities of queer life, community, and kinship to challenge the limitations of the state.
There's so much to unpack in this stunning book, published by Figure 1, that I thought instead of a traditional review, it would be great to speak with the authors behind the project.
I had the chance to catch up with authors Craig and Nisha via email to talk more in depth about the book, the process, and the inspiration behind Out North. 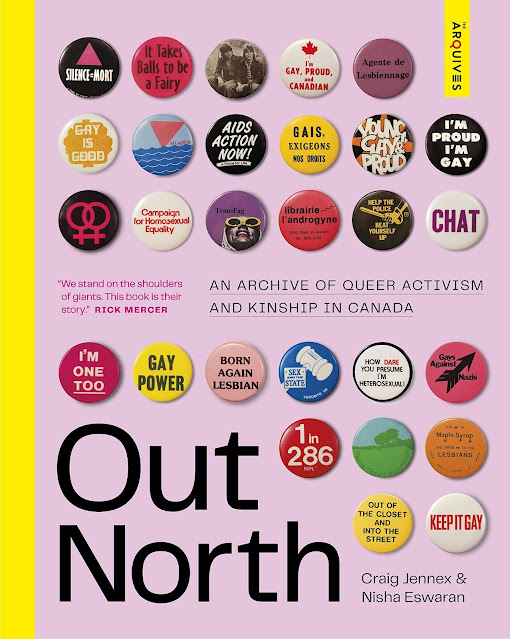 Craig Jennex is an Assistant Professor of English at Ryerson University and a scholar of LGBTQ2+ culture and politics, queer and feminist theory, and popular music studies. He is currently writing a book on the role of popular music (with particular attention to disco and womyn’s music) in the gay and lesbian liberation movement in Canada. He is co-editor (with Susan Fast) of Popular Music and the Politics of Hope: Queer and Feminist Interventions (Routledge 2019).
Nisha Eswaran is an academic and writer whose research focuses on British empire, South Asian nationalisms, and queer history. She holds a PhD in English Literature in the field of Postcolonial Studies from McMaster University in Hamilton. Her writing has appeared in Postcolonial Text, South Asian Review, The White Wall Review, Jamhoor, Kajal, and Briarpatch.

Out North: An Archive of Queer Activism and Kinship in Canada is available for purchase at Indigo. Check GoodReads for additional retailers.

Labels: figure1 in conversation with lgbt
Location: Vancouver, BC, Canada