Letters to Amelia by Lindsay Zier-Vogel

“Amelia is so much more than her relationship with Gene. So much more than her disappearance. Grace can picture her ducking under these red and rounded wings, the black block letters spelling out NR-79521. She can see her hands touching her face, nervous, and excited, the tomato soup from the Cochrane Hotel waiting for her in the cockpit.”

Grace Porter is reeling from grief after her partner of seven years unexpectedly leaves. Amidst her heartache, the thirty-year-old library tech is tasked with reading newly discovered letters that Amelia Earhart wrote to her lover, Gene Vidal. She becomes captivated by the famous pilot who disappeared in 1937. Letter by letter, she understands more about the aviation hero while piecing her own life back together.

When Grace discovers she is pregnant, her life becomes more intertwined with the mysterious pilot and Grace begins to write her own letters to Amelia. While navigating her third trimester, amidst new conspiracy theories about Amelia’s disappearance, the search for her remains, and the impending publication of her private letters, Grace goes on a pilgrimage of her own. 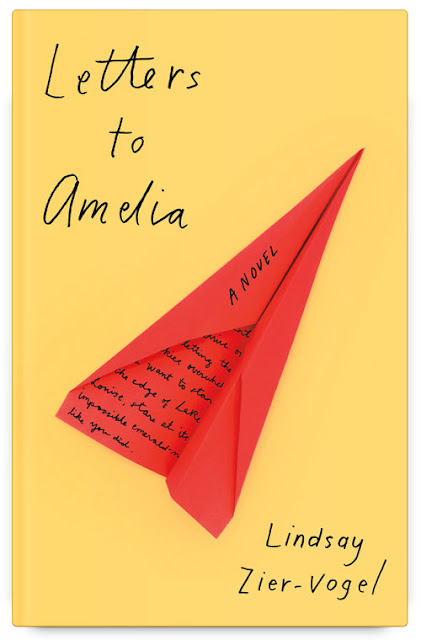 Review
Letters to Amelia is a gorgeous story of love, family bonds, and close friendships. It drew me in right away, and kept me up most of the night. I had a hard time putting this one down. Immediately I found Grace, the protagonist, to be so relatable. It felt the same with the other characters, Jenna, Carolyn, and Jamie, I felt like they were all friends of mine. Lindsay's conversational and down to earth tone made this novel a pleasure to read.
When Grace is given the box of letters, I felt my own heart start to beat faster, excitement building within me. It felt absolutely thrilling to think of Grace opening that box, especially in her time of need. Reading each letter, gorgeously written by Lindsay, had the power to transport me back in time. It's fascinating to think of Grace becoming so intertwined with Amelia, her adventures, and her love story, all the while she's caught up in her own journey.
“I can't stop listening to her perfect little heart,” she writes to Amelia, “I wish you could hear it, the whoosh, like waves falling on top of each other.”
With a prose so vividly descriptive, Letters to Amelia, will take you on an adventure from the streets of Toronto around Queen Street and Kensington Market, all the way to the beautiful pastures of Newfoundland, where you'll imagine walking around beautiful places like Harbour Grace and Cape Spear.
I didn't know much about Amelia Earhart before picking this one up, but felt that, like Grace, I got to know her more as the story progressed. As Grace was sitting at her desk in the reader's room Googling, I found myself doing the same.
The cherry on top was finding out about Amelia's landing in Derry, just an hour's drive from where I was born and raised. I had no idea and to think of her wandering around the very same streets that I spent so much time really brought a smile to my face.
Letters to Amelia made for an charming read. Toward the end, I felt so close to Grace and her story. This was an absolutely lovely, lighthearted, and beautifully written story.
Lindsay Zier-Vogel is a Toronto-based writer, arts educator and the creator of the internationally-acclaimed Love Lettering Project. After studying contemporary dance, she received her MA in Creative Writing from the University of Toronto. Her writing has been widely published in Canada and the U.K. Since 2001, she has been teaching creative writing workshops in schools and communities. Letters to Amelia is her first book.

Letters to Amelia is available for pre-order (releasing September 7th) at Book*hug Press or Indigo. Check GoodReads for additional retailers.

Thank you Book*hug press for the advanced readers copy.