In conversation with Sean Avery Medlin

Sean Avery Medlin (he/they) is a gamer and Hip-Hop nerd, whose only wish in this world is to watch an unproblematic Black sci-fi T.V. show. Till then, Medlin teaches creative writing and guides cultural work for organizations across the U.S., while also creating rap, poetry, prose, and performance. Their music, literature, and theater all question the limits of Black masculinity, media (mis)representation, and personal narrative.

Medlin has shared stages with Saul Williams, J. Ivy, and Lemon Andersen. Their work’s been featured in Afropunk, Blavity, the 2018–2019 Chicago Hip-Hop Theater Festival, and the 2020 Tucson Poetry Festival. Sean's Hip-Hop play and album, skinnyblk, along with all their previous work, is available online at their website.

I had the chance to chat with Sean about their debut book, 808s & Otherworlds: Memories, Remixes, & Mythologies.

I'm really excited about your book, 808s & Otherworlds, could you tell me about it and the inspiration behind it?

Well “808s & Otherworlds” really started off as a thesis project for my undergrad Creative Writing degree. Back then it was more memoir style, more essays, and because it wasn’t a published book I could quote big chucks of Hip-Hop and Neo-Soul artists that I like. This was all in 2016. Now the book is really a new thing with a life of its own, and it’s able to do things that my thesis project could never do. “808s & Otherworlds” is a deep exploration of imagination, pop culture, the effects on the psyche of anti-Black state violence, and self recreation.

This is your first book, what does it feel like to put your work out there to a wider audience?

It’s definitely a bit scary and nerve-racking, but it’s also humbling, awesome, and incredibly exciting. I get to do something a lot of people wish to do. I think about my friends and family members who may not have this opportunity, or flat out never got it. I hope this book means something to all of the thinkers and writers and sayers who inspired it.

When did you start writing poetry? Was it something that came naturally to you?

I was writing poetry around 14 years old, maybe 13. It was really natural to me, I had a huge appreciation for Hip-Hop music from my Dad, and my Mom really liked R&B and Soul. Between the two of their music influences and their insistence that I read, I developed an admiration for rhythm, language, sound, all of that. That interest evolved into love, and that love led me to practice my craft, and that’s essentially what being a poet and rapper means to me, practicing my craft.

Your music, literature, and theater all question the limits of Black masculinity. Where do you feel we are at as a society today when it comes to this?

I mean, we haven’t gotten anywhere really. I think our understanding of gender and sexuality is still congruent with the binary genders and heteronormative sexualities of our enslavers. And of course, Blackness itself is a construct which binds Blackfolks to the imagination of our oppressors, so things can’t even really change until we, myself included, move past “Black masculinity” as an identifier.

What's one book that you would recommend to my readers?

Um, I really love Don’t Call Us Dead by Danez Smith. I think it captures a particular complexity of Black experience: this feeling of being alive and living with, or in death. “summer, somewhere” really shows a heaven of Black boys, and I’m a sucker for large-scale world-building in poems.

Are you reading anything yourself right now? Any books on the must-read list for the coming months?

Right now I’m just catching up on classics that I haven’t read, so I’m reading Sula by Toni Morrison, Rest in Power. I’m really looking forward to reading Akwaeke Emezi’s Dear Senthuran which actually came out in June this year. 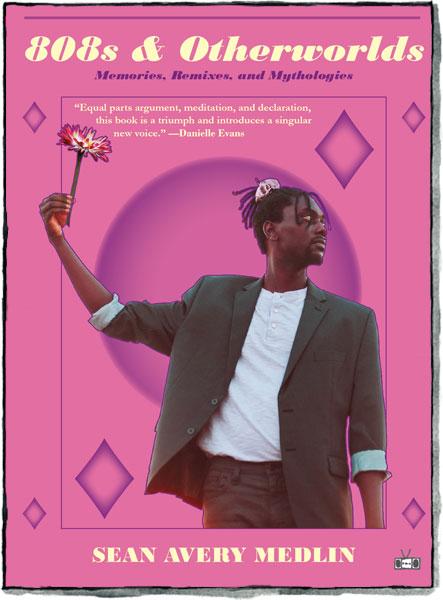 808s & Otherworlds: Memories, Remixes, & Mythologies announces a bold and incendiary new voice in Sean Avery Medlin. Against the backdrop of the Phoenix suburbs where they were raised, Medlin interrogates the effects of media misrepresentation on the performance of Black masculinity. Through storytelling rhymes and vulnerable narratives in conversation with both contemporary Hip-Hop culture and systemic anti-Blackness, 808s & Otherworlds pieces together a speculative reality where Blackfolk are simultaneously superhuman and dehumanized.

From the gut-wrenchingly real stories of young lovers unmythed by segregation or former classmates appropriating Black culture, to the fantastic settings of Hip-Hop songs and comic characters, Medlin weaves a tapestry of worlds and otherworlds while composing a love letter to family and self, told to an undeniably energetic beat.