Djinn Patrol on the Purple Line by Deepa Anappara

“Djinns aren’t real, but if they were, they would only steal children because we have the most delicious souls”

DJINN PATROL ON THE PURPLE LINE

Three friends venture into the most dangerous corners of a sprawling Indian city to find their missing classmate.

Down market lanes crammed with too many people, dogs, and rickshaws, past stalls that smell of cardamom and sizzling oil, below a smoggy sky that doesn’t let through a single blade of sunlight, and all the way at the end of the Purple metro line lies a jumble of tin-roofed homes where nine-year-old Jai lives with his family. From his doorway, he can spot the glittering lights of the city’s fancy high-rises, and though his mother works as a maid in one, to him, they seem a thousand miles away.

Jai drools outside sweet shops, watches too many reality police shows, and considers himself to be smarter than his friends Pari (though she gets the best grades) and Faiz (though Faiz has an actual job). When a classmate goes missing, Jai decides to use the crime-solving skills he has picked up from TV to find him. He asks Pari and Faiz to be his assistants, and together they draw up lists of people to interview and places to visit.

But what begins as a game turns sinister as other children start disappearing from their neighborhood. Jai, Pari, and Faiz have to confront terrified parents, an indifferent police force, and rumours of soul-snatching djinns. As the disappearances edge ever closer to home, the lives of Jai and his friends will never be the same again. 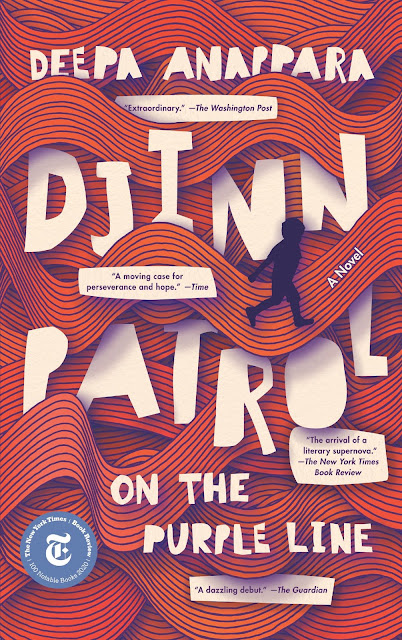 Upon hearing about Djinn Patrol on the Purple Line, I felt compelled to read it, drawn to its plot line and the fact that its inspiration comes from real life incidents pertaining to the large number of disappearances in metropolitan India.

Every eight minutes, a child goes missing in India. According to the annual National Crime Record Bureau’s “Crime in India” 2019 report, a total of 73,138 children were reported missing in 2019.

I have a hard copy of the book, thanks to Penguin Random House Canada, and decided to purchase the audiobook to go along with this one. It’s narrated by British actors Indira Varma, Himesh Patel, and Antonio Aakeel.

Deepa’s prose is extremely vivid, and I felt as though I was catapulted onto the streets of India, where my senses were overwhelmed by the imaginary sounds of auto rickshaws, the aromas of chai and turmeric, and the sights of blue and orange saris.

Anappara is, however, realistic in her prose when setting the scene, and in no way trying to paint a pretty picture. “All I see are empty wrappers and holey plastic bags and eggshells and dead rats and dead cats and chicken and mutton bones sucked dry by hungry mouths,” she writes.

Within moments, I have this image of Jai, Pari, and Faiz, walking to school through their basti, enveloped in the smog. I imagine Jai, the protagonist, with a cheeky grin on his face, telling Pari and Faiz about the latest episode of Police Patrol, and how he will solve this mystery of the missing children.

“I’m the only one who can do something about it. I can find Bahadur because I have seen many-hundred programs on TV and I know exactly how detectives like Byomkesh Bakshi catch the bad people who steal children and gold and wives and diamonds,” says Jai.

Jai has a little fire within him and is instantly likeable, Antonio Aakeel only enhancing the reader’s experience in the audiobook. He’s perfectly suited for the role of Jai, the smooth whispering tone of his voice, and while he may not sound like a nine-year-old boy, he does an excellent job portraying the protagonist.

Djinn Patrol on the Purple Line was an accurate exploration of many themes, mostly of grief and heartbreaking loss, as the children begin to go missing, separated from their parents. It was extremely well written, with each scene richly atmospheric. Author Deepa Anappara manages to hold the reader’s attention from beginning to end.

Deeply thought-provoking, this book leaves the reader with more knowledge about communities like Jai’s, who are living on a basti, and what that must be like for them, as they constantly fear for the loss of their homes.

For additional insight, Random House have provided this incredible reading guide which includes a Q&A with the author, discussion questions, recipes for gulab jamuns, and chai, and as well as a glossary of Hindi and Urdu terms used in the book.

The one I’ve used most here is basti, which is another way to say settlement and is often used to refer to slums. The word djinn is mentioned a lot in the book too, and is a type of spirit that can be good or bad.

I definitely recommend giving this book a read or listen.

Deepa Anappara grew up in Kerala, southern India, and worked as a journalist in cities including Mumbai and Delhi. A portion of her debut novel, Djinn Patrol on the Purple Line, won the Lucy Cavendish College Fiction Prize, the Deborah Rogers Foundation Writers Award, and the Bridport/Peggy Chapman-Andrews Award. She has an M.A. in Creative Writing from the University of East Anglia,  where she is currently studying for a Ph.D. on a CHASE doctoral fellowship.

Djinn Patrol on the Purple Line is available to purchase in hardback or paperback at Indigo and in e-book or audiobook format on Kobo. Check Penguin Random House CA for additional retailers.