“She's the type to turn hardship into hardness, like a shield for people she loves.”

Reese almost had it all: a loving relationship with Amy, an apartment in New York City, a job she didn't hate. She had scraped together what previous generations of trans women could only dream of: a life of mundane, bourgeois comforts. The only thing missing was a child. But then her girlfriend, Amy, detransitioned and became Ames, and everything fell apart. Now Reese is caught in a self-destructive pattern: avoiding her loneliness by sleeping with married men.

Ames isn't happy either. He thought detransitioning to live as a man would make life easier, but that decision cost him his relationship with Reese—and losing her meant losing his only family. Even though their romance is over, he longs to find a way back to her. When Ames's boss and lover, Katrina, reveals that she's pregnant with his baby—and that she's not sure whether she wants to keep it—Ames wonders if this is the chance he's been waiting for. Could the three of them form some kind of unconventional family—and raise the baby together? 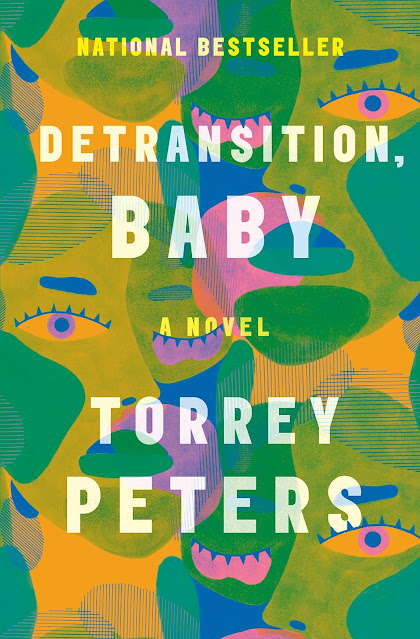 Where do I even begin with this one? I want to do it the justice that it so deserves. You know when sometimes a book is so completely hyped, then you read it, and it falls flat? Well, Detransition, Baby most certainly was not that kind of book. It lived up to every hype, and well surpassed any expectations that I had.

Detransition, Baby. follows the lives of Reese, a transgender woman, Ames, a detransitioned male, and Katrina, a 39-year-old cisgender woman who is carrying Ames's child. The book opens one month post conception, when Ames calls ex-girlfriend Reese to tell her about the baby. The two had been in a relationship, back when Ames was living as Amy, and hadn't spoken for three years. He calls Reese with a proposal for her to co-mother the child with him and Katrina, knowing that one thing she wants more than anything is to be a mother.

Reese came to know of her natural mothering abilities when working at a gym's daycare, looking after two infants. "The tiny soft bodies in her arms, the way they giggled and cooed, triggered some sort of deep oxytocin-laced trance in Reese." The mothers who had entrusted her with their babies returned and gushed about her "natural mothering instincts".

She accepts Ames's proposal, but Ames still has to bring this forward with Katrina.

Detransition, Baby then moves seamlessly back and forth, starting eight years prior to conception, when Reese meets Ames, then known as Amy, for the first time. Each chapter flips smoothly between the past and present, telling the story from both Reese and Ames's perspectives.

While I couldn't relate specifically to any of the characters in the book, I most certainly could grasp their feelings and emotions through Peters' well written prose. I found the book really insightful, heartwarming, and comedic at times. I felt I knew Reese by the end of the book, her story the most intriguing to me. I also learned a lot from this book, having not had much exposure, nor read much about transgender life. If you have the option, I recommend the book over the audiobook, since I found the narrator a bit stiff and robotic at times.

All in all, this was a beautifully told, exceptionally written and original story from Torrey Peters. The novel is a National Bestseller, has been noted as one of the best books of 2021 so far by many publications, and has been Longlisted for The Women’s Prize. It deserves all the attention and recognition that it gets.

I recommend checking out this free excerpt, courtesy of Penguin Random House.

Torrey Peters is the author of the novellas Infect Your Friends and Loved Ones and The Masker, which are available for free on her website. She holds an MFA from the University of Iowa and an MA in Comparative Literature from Dartmouth. She grew up in Chicago and now lives in Brooklyn.

Detransition, Baby is available to purchase in hardcover from Indigo and in e-book format from Kobo. Check Penguin Random House CA for additional retailers.

Thank you Penguin Random House for the copy in exchange for an honest review!