Care Of: Letters, Connections, and Cures by Ivan Coyote

“Those months, for me, were made far less lonely by the process of connecting and conversing with the twenty people who kindly agreed to include bits of their own lives and truths in this book. These letters, and the people who wrote them, were a lifeline for me, an antidote, a cure for the sudden stillness of the wheels under me.”

CARE OF: LETTERS, CONNECTIONS, AND CURES

Writer and performer Ivan Coyote has spent decades on the road, telling stories around the world. For years, Ivan has kept a file of the most special communications received from readers and audience members—letters, Facebook messages, emails, soggy handwritten notes tucked under the windshield wiper of their truck after a gig.

Then came Spring, 2020, and, like artists everywhere, Coyote was grounded by the pandemic, all their planned events cancelled. The energy of a live audience, a performer’s lifeblood, was suddenly gone.

But with this loss came an opportunity for a different kind of connection. Those letters that had long piled up could finally begin to be answered.

Care Of combines the most powerful of these letters with Ivan’s responses, creating a body of correspondence of startling intimacy, breathtaking beauty, and heartbreaking honesty and openness. 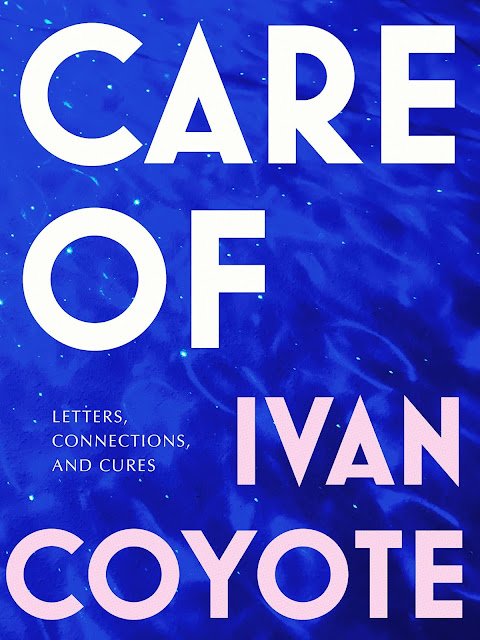 I just read your book and listened to the audiobook. It took my breath away. Listening to you narrate the audiobook gave me goosebumps all over, and brought tears to my eyes many times throughout. I hadn't heard of you before receiving this book, but now that I've finished I feel like I know you, or at least a part of you. And I feel so honoured to have been introduced to you through this stunning book.

I felt compelled and inspired to write you a letter. Instead of writing a traditional review of your book as I usually would on my platform, I decided I would write you an open letter with the hope that you'll see it and know how much your book affected me on a deep emotional level. It really felt like a gift to be able to read this book and to hear you narrate it with such passion.

I grew up in an environment and in a country where it wasn't acceptable to be gay. I was forced to hide that part of myself for many years. It was, and still is, a part of myself that I feel deeply ashamed of. To say I am a gay male in a relationship with another man is still something I have a hard time telling others, for fear that I'll be judged by them. For fear that I'll hear the words "fag, queer, gay boy", words of abuse that were used so often when I was growing up.

Reading your book, listening to the letters your fans have written you, and your responses to them, I felt many emotions. Most of all, I felt a deep and foreign desire to start loving and accepting myself for who and what I am. The concept of self-compassion that I so often grapple with felt more within reach with each letter and response that I read.

I was blown away by your attention to detail and compassion in each one of your responses. Every letter took me to a new place in my mind. I found them all to be so well crafted, with each one carefully and gorgeously written. I felt at times that you were speaking directly to me, filling me up with love, strength, and courage.

For you, I am so grateful.

Ivan Coyote is a writer and storyteller. Born and raised in Whitehorse, Yukon, they are the author of thirteen books, the creator of four films, six stage shows, and three albums that combine storytelling with music. Coyote’s books have won the ReLit Award, been named a Stonewall Honour Book, been longlisted for Canada Reads, shortlisted for the Hilary Weston Prize for non-fiction, and awarded BC and Yukon Book Prize’s inaugural Jim Deva Prize for Writing That Provokes. In 2017 Ivan was given an honorary Doctor of Laws from Simon Fraser University for their writing and activism.

Care Of is available to purchase in hardcover format at Indigo and in e-book or audiobook format from Kobo. Check Penguin Random House CA for additional retailers.

Thank you Penguin Random House for the copy of this book in exchange for an honest review.