After Dark by Haruki Murakami

A short, sleek novel of encounters set in Tokyo during the witching hours between midnight and dawn, and every bit as gripping as Haruki Murakami’s masterworks The Wind-Up Bird Chronicle and Kafka on the Shore.
At its center are two sisters—Eri, a fashion model slumbering her way into oblivion, and Mari, a young student soon led from solitary reading at an anonymous Denny’s toward people whose lives are radically alien to her own: a jazz trombonist who claims they’ve met before, a burly female “love hotel” manager and her maid staff, and a Chinese prostitute savagely brutalized by a businessman. These “night people” are haunted by secrets and needs that draw them together more powerfully than the differing circumstances that might keep them apart, and it soon becomes clear that Eri’s slumber—mysteriously tied to the businessman plagued by the mark of his crime—will either restore or annihilate her. 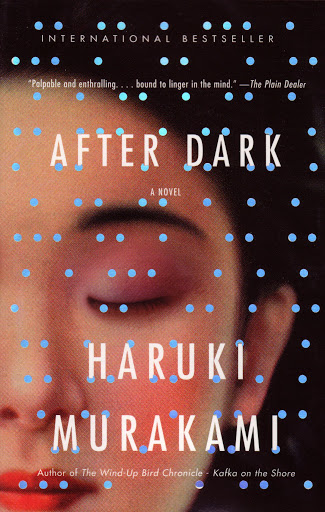 This is a much older book than I’m used to reviewing, one that’s been on my bookshelf for quite a while. I felt drawn to read and review it for a few reasons: it’s authored by Haruki Murakami, the famed Japanese author whose work is world-renowned. This is the first of his books I’ve read, and I have a few others on my shelf to dive into after this.
I also felt compelled to read it because of the intriguing plot. The fact that it all happens over one night, starting out at an anonymous Denny’s in Tokyo’s entertainment district really caught my eye. I love stories with a range of characters, and the description promises that, so I felt quite excited about this one.
I also listened to the accompanying audiobook, rented from the Vancouver Public Library. The audio is narrated by Janet Song, whose voice was calm and soothing throughout.
Murakami paints exquisite pictures of each scene, right down to the clothes people are wearing, their body language, what they see and hear. He really breathes life into this story through his prose.
I loved watching each character develop as the story progressed. It felt like a series of short stories, each person Mari encountered or laid eyes on had a layered story of their own. I felt ever more engaged when the other characters appeared as the clock ticked on: Kaoru and Komugi, Shirakawa shopping for his wife at the 7-11. I felt sadness for Shirakawa, who was working late into the night, “Here we go again: never meeting,” his wife says.
I actually read this one in the middle of the night when I couldn’t sleep, which is pretty ironic, because as the characters were moving through the night in Tokyo, I felt like I myself was taking an adventurous trip, the story whisking me away to another world for the night, even if only in my mind. I felt like my imagination ran rampant for the entire novel.
Mari is quite a quirky character, and I enjoyed getting to know her as the story progressed. I liked thinking about the relationship building between her and Takahashi. “You seem to have a lot of long stories,” she says to him as she gets to know him.
“You know what I think?” Mari says at one point, “That people’s memories are maybe the fuel they burn to stay alive. Whether those memories have any actual importance or not, it doesn’t matter as far as the maintenance of life is concerned.”
After Dark took me on a wild journey to Tokyo, and I really enjoyed this one. It was beautifully written and deeply thought-provoking.
The story ends at 7am, and by that point, I felt like I had been on an transatlantic journey, the story having consumed me for the 6 hours that I listened to the audiobook and followed along with the book itself. I felt soothed and ready to sleep afterwards, ready for the vivid dreams that would take over as I closed my eyes.

About the author
Haruki Murakami was born in Kyoto in 1949 and now lives near Tokyo. His work has been translated into more than fifty languages, and the most recent of his many international honours is the Hans Christian Andersen Literature Award in 2016.
About the translator
Jay Rubin is well known for his translations of Haruki Murakami's works. He received his PhD in Japanese literature from the University of Chicago and is the Takashima Research Professor of Japanese Humanities at Harvard University.

After Dark is available to purchase at Indigo and on Kobo. Check Penguin Random House CA for additional retailers.