Inside Silicon Valley's Mission to Change What We Eat

From the publisher
Eating a veggie burger used to mean consuming a mushy, flavorless patty that you would never confuse with a beef burger. But now products from companies like Beyond Meat, Impossible Foods, Eat Just, and others that were once fringe players in the food space are dominating the media, menus in restaurants, and the refrigerated sections of our grocery stores. With the help of scientists working in futuristic labs––making milk without cows and eggs without chickens––start-ups are creating wholly new food categories. Real food is being replaced by high-tech.
Technically Food: Inside Silicon Valley’s Mission to Change What We Eat by investigative reporter Larissa Zimberoﬀ is the first comprehensive survey of the food companies at the forefront of this booming business. Zimberoff pokes holes in the mania behind today’s changing food landscape to uncover the origins of these mysterious foods and demystify them.
Through news-breaking revelations, Technically Food examines the trade-oﬀs of replacing real food with technology-driven approximations. Chapters go into detail about algae, fungi, pea protein, cultured milk and eggs, upcycled foods, plant-based burgers, vertical farms, cultured meat, and marketing methods. In the final chapter Zimberoff talks to industry voices––including Dan Barber, Mark Cuban, Marion Nestle, and Paul Shapiro––to learn where they see food in 20 years.
As our food system leaps ahead to a sterilized lab of the future, we think we know more about our food than we ever did. But because so much is happening so rapidly, we actually know less about the food we are eating. Until now. 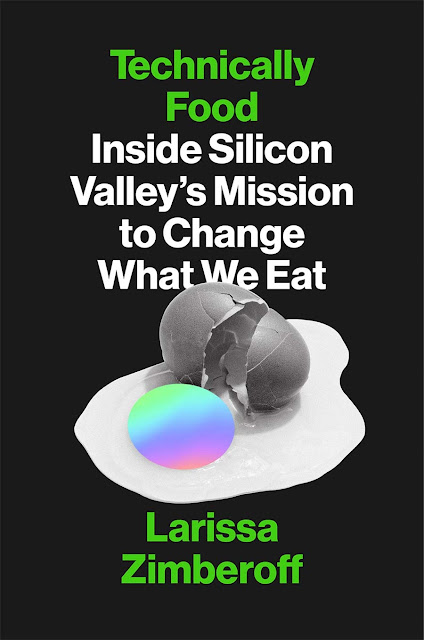 Review
While I was hoping this book would give me a more in depth look at the new food wave taking over our grocery stores and restaurants, it was also interesting to hear about the author's journey.

Larissa Zimberoff's food education began when she was diagnosed with type 1 diabetes. She was told how to calculate the grams of carbohydrates in a meal, an important factor for those with diabetes. She states, "my knowledge gives me an edge: I understand food on a molecular level. I think of this as my superpower."

It was also so fascinating to learn about the different kinds of algae, how may they benefit us, and how startup companies have tried (and failed) to bring them to market.

An example Larissa gives in this chapter is Soylent, perhaps one of the most well-known brands on the new foods market. She states, that this product, which "originally included algal oil, became one of the first truly weird foods out there."

In the algae chapter, I loved learning about the various startups that are incorporating this abundant and nutritious food. One in particular that Larissa touches on is Nonbar, from a company called nonfood. The name was enough to intrigue me to look it up. I was planning to order one but according to the website, they're sold out. So either the product is too hot of a commodity, or they stopped selling it. Nonbar states that it's "the first nutrition bar with algae as its primary ingredient."
Larissa mentions in Technically Food that it wasn't very sweet, and she couldn't say she liked it, but she kept eating it. After her third bite, she was in, began to relish it, and was sad to see it go.
It looks like space food to me, so intriguing in its silver wrapping. The product itself, looks like a bar of soap, and quite possibly the most unappetizing thing I've ever seen. I'll have to order one for myself when they're back in stock.

The next chapter that Larissa dives into is fungi, and in particular, using it as a steak substitute. In this chapter, Zimberoff starts out by talking about the meat substitute, Quorn. Being from the United Kingdom, where it first launched in 1985, I'm very familiar with this product. I'm familiar with the taste, branding, and line of products. However, I have to admit, I had no idea of its contents, or that it was a fungi based food. Quorn is made mycoprotein, and according to their website, "The main ingredient of mycoprotein is Fusarium venenatum, an ascomycete, a type of fungus that naturally occurs in the soil."
This informative chapter also touches on how companies are using mycelium to improve food. Larissa talks about MycoTechnology, a company that has "no plans to sell its own products in a supermarket."
She first heard of the company when they announced that they had found a way to remove gluten from bread and pasta. According to the book, "the resulting pasta made from this mycelium-treated flour wasn't 100 percent gluten-free, but it was close."
A chapter I found particularly interesting was the pea protein one. The chapter's subheading is, "Finally, Something That Could Topple Big Soy." My experience with pea protein has only ever been at a Vancouver-based custom smoothie company, Body Energy Club, where I opt for pea protein instead of the soy based one. Beyond that, I didn't know much. In this chapter, Larissa talks about meeting with a company called Ripple, who claim to make a plant-based milk, from peas! Zimberoff tried the milk, and also a pea yogurt from the company.
"I glanced down at the dull colors, and with a new appreciation for toddlers everywhere, I made an "icky" face in my mind," she says.
Perhaps the chapter I found the most interesting was the plant-based burgers one, since these burgers seem to be just about everywhere these days. From Beyond Meat to the Impossible Burger, they appear to be the hottest menu item at most restaurants I frequent in Vancouver. Larissa talks about both of these companies in the book, stating that "the plant-based meat category grew by 29 percent in the past two years, to $5 billion." It seems like a lot, especially considering that traditional burgers only grew by 2 percent. Zimberoff asks, why are investors betting that these new iterations of the meatless burger can succeed where others have failed?
The book concludes with, what are we eating in twenty years? Larissa leaves us with some important questions.
"Do we eat to save the planet, the animals, or ourselves? What about traditional foods from cultures already threatened by a food system that doesn't serve their basic needs?"
She summarizes that the reasons behind the COVID-19 pandemic might point us to putting an end or at least a reduction in eating animals raised in industrial feedlots. Zimberoff's hope is that investors will find reasons to direct their fortunes toward bettering the things we already know can feed the world.
Technically Food made for a fascinating read. I definitely recommend it.

About the Author
Larissa Zimberoff is a freelance journalist who covers the intersection of food, technology, and business. Her work has appeared in the New York Times, the Wall Street Journal, Bloomberg Businessweek, and many others. Zimberoff often presents on, moderates, and leads panels on food tech including at Stanford, reThink Food at CIA/Napa, and IACP. She splits her time between San Francisco, California, and New York City.

Technically Food is available to purchase at Indigo and on Kobo. Check GoodReads for additional retailers.

Thank you to Manda and Abrams for the gifted copy in exchange for an honest review.
Labels: abrams food nonfiction
Location: Vancouver, BC, Canada