“He had innate charisma, a brilliant record collection, complete fearlessness in political argument, and he knew how to love you more than anybody else.”

An unforgettable coming-of-age novel that becomes a profound mediation on life, death, and lifelong friendship.

Everyone has a Tully Dawson: the friend who defines your life.

In the summer of 1986, in a small Scottish town, James and Tully ignite a brilliant friendship based on music, films and the rebel spirit. With school over and the locked world of their fathers before them, they rush towards the climax of their youth: a magical weekend in Manchester, the epicentre of everything that inspires them in working-class Britain. There, against the greatest soundtrack ever recorded, a vow is made: to go at life differently.

Thirty years on, half a life away, the phone rings. Tully has news--news that forces the life-long friends to confront their own mortality head-on. What follows is an incredibly moving examination of the responsibilities and obligations we have to those we love. Mayflies is at once a finely-tuned drama about the delicacy and impermanence of human connection and an urgent inquiry into some of the most important questions of all: Who are we? What do we owe to our friends? And what does it mean to love another person amidst tragedy? 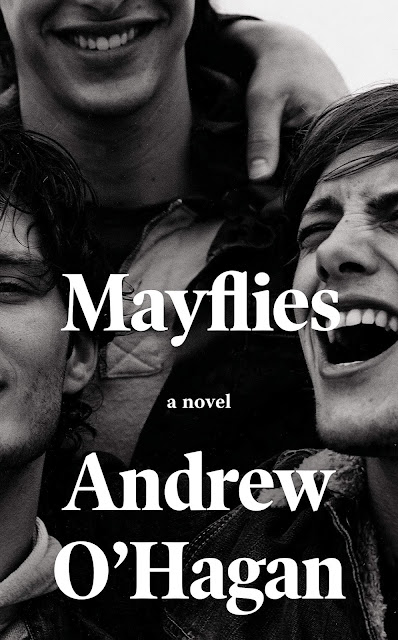 What I thought
Mayflies is an absolutely gorgeous story of love and friendship. I adored this one. Andrew O'Hagan is not only an immensely talented writer, but also a wonderful narrator.
O'Hagan catapults the reader directly onto the streets of Manchester, where the protagonist Tully, and his friends are spending the weekend for the festival of the Tenth Summer.  The way in which Andrew describes Tully is truly stunning.
"His brighter language made older people seem dull," continuing, "I didn't know I wanted approval until Tully gave it to me. I didn't know life could be like that. It was part of the teenage dream, to find a pal who totally noticed you."
I fell deeply for Tully and his unique and vibrant personality right from the beginning. He's the most memorable of characters in the book. I even thought of my own Tully. Someone I felt compelled to pick up the phone and give a call to.
The characters were really brought to life in the audiobook. O'Hagan narrates and does a fantastic job of portraying the lads. Through his varying accents and changes in tone, it was easy to distinguish the characters. The voice of Limbo, one of the leads, speaks with a lisp, which O'Hagan executes so accurately. I felt I could listen to Andrew's voice all day. You might need to slow this one down at times if you're not familiar with the accent.
The authenticity and rawness of O'Hagan's words completely sets the stage, and captures the essence of the characters and their surroundings. I had a clear image throughout, of the boys in Manchester together, a weekend of pure freedom, away from their fathers.
"There was a dazzle on the water. It was clear as silver bells beyond the nettles and the buttercups and the washed-out pinks dropping from the tree. Algae snagged on the rocks. We were full of fresh air and we had our tickets."
Beautifully written, the story weaves from the past to the present, from 1986 to thirty years later, and is a reminder of the strong and unbreakable bonds of friendship, even through the passage of time.
Mayflies is rich with humanity, its prose flowing seamlessly from cover to cover. I can't recommend this one enough.
Andrew O’Hagan is the author of the novels Our Fathers, Personality, and, most recently, Be Near Me, longlisted for the Man Booker Prize. His work has appeared in the London Review of Books, the New York Review of Books, the New Yorker, and The Guardian (U.K.). In 2003, O’Hagan was named one of Granta’s Best Young British Novelists. He lives in London, England.

Mayflies is available to purchase at Indigo and in e-book or audiobook format on Kobo. Check Penguin Random House CA for additional retailers.

FYI, I purchased both audio and hardback copies of the book, so this was review was not written in exchange for a book.