“Amichai was right. Had been right all along. That two people actually could be in the very same spot, without so much as a molecule separating them. That nowadays, you could squeeze into another person’s insides, hold on tightly without letting go.”

For fans of Etgar Keret, a debut short story collection that fuses the humour of everyday life in Israel with technology's challenges and the latest discoveries about the human brain.

At once compassionate, philosophical, and humorous, Jerusalem Beach is a foray into the human condition in all its contradictions. Through a series of snapshots of contemporary life in Israel, Gefen reveals a world that’s a step from the familiar.

A man’s grandfather joins an army platoon of geriatrics looking for purpose in old age. A scheming tech start-up exposes the dire consequences of ambition in trying to share human memories. An elderly couple searches for a beach that doesn’t exist. And, a boy mourns his brother’s death in an attempt to catch time like flies in his fist. 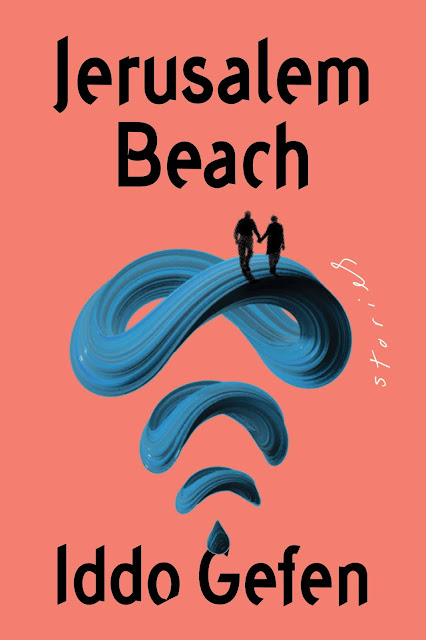 I was initially drawn to this book by its gorgeous pink and blue cover, which was designed by Michael Morris. Reading the description, my interest was peaked, and I was intrigued. I'm a big fan of short stories and had never read anything that originated in Israel, so I was really excited about the idea of discovering a new author and hoped to find something fresh within the pages of Jerusalem Beach. I had a feeling I was going to like it, I just wasn't sure how much I'd end up liking it, which was a lot.

I found it so entirely compelling, addictive almost, and completely original. The opening story stole my heart, and I sailed through the book from there onward, my imagination running rampant, while each story took me to a new place in my mind. I felt a little jolt of excitement as I began each new story, unaware of what it would be about, or where it would take me. I always found myself pleasantly surprised, and was constantly in awe of Iddo's adventurous prose and originality.

Each story was deeply layered, engaging, and almost psychedelic. There were a few that resonated with me beyond the first one about the Neuerman family, particularly the story of an elderly couple making their way back to Jerusalem in search of a beach after sixty years away from the city, and the tale of a male and female living alone on a planet far from everyone and everything.

I found myself truly enveloped within each story, the details of them so accurately put into play and the scenes created so vividly that I could picture them in my mind. There are so many feelings, emotions, and reading between the lines with each tale. The stories explore themes of loss, grief, loneliness, and family love and bonding.

This book took really took me by surprise. The plot doesn't do it enough justice — it truly is a masterpiece, and an absolutely stunning debut. Jerusalem Beach is well worth the read.

Iddo Gefen was born in 1992 in Israel and currently resides in Tel Aviv. He is an author and neurocognitive researcher at the Virtual and Augmented Reality Lab at the Sagol Brain Institute. There, he leads an innovative study to diagnose aspects of Parkinson's disease using storytelling and augmented reality.

Daniella Zamir lives in Tel-Aviv, where she works as a literary translator. She obtained her bachelor’s degree in literature from Tel Aviv University and her master’s degree in creative writing from City University in London.

Jerusalem Beach is available for purchase at Indigo and on Kobo. Check Penguin Random House CA for additional retailers.

Thank you to Astra House and NetGalley for the advanced reader copy of this book!